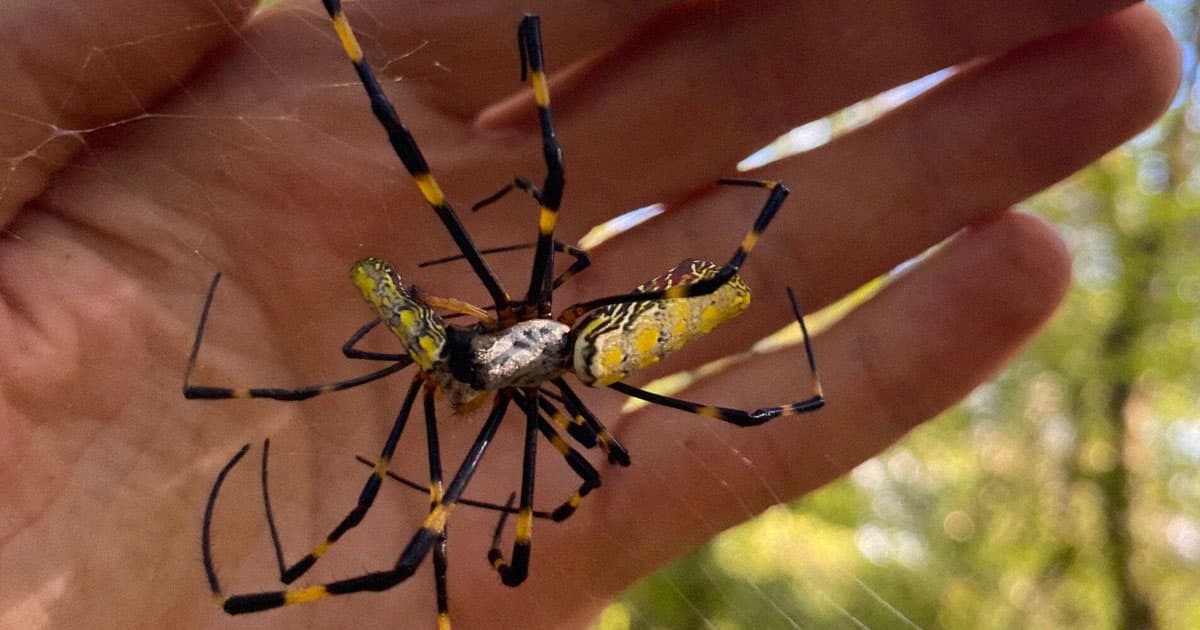 According to the University of Georgia, giant spiders the size of your palm are set to parachute from the sky all over the Eastern United States this summer.

The massive blue, black, and yellow arachnids, called Joro spiders, are set to "be all over power lines, in trees around town and even on your front porch come summer," according to the university's statement.

And humans are likely at fault, because we accidentally imported the spiders as stowaways on shipping containers from Asia, the researchers suggest. Sorry, folks — the giant spiders are your own damn fault!

While it's an invasive species, there's a silver lining: scientists don't believe the critters impact local ecosystems much.

"People should try to learn to live with them," advised Andy Davis, corresponding author of a new study published in the journal Physiological Entomology, and research scientist at the University of Georgia, in the statement.

"If they’re literally in your way, I can see taking a web down and moving them to the side, but they’re just going to be back next year," he added.

The Joro spider is a relative of the golden silk spider, which landed in the US from the tropics in the 1800s.

Using a sightings tracking app called iNaturalist, the team of researchers kept track of the spread of the species to find out if, like the golden silk spider, it was confined to the Southeast due to its vulnerability to colder temperatures.

According to their new study, however, the Joro spider can withstand even brief freezes and its metabolism keeps working in colder climates.

That means we should expect it to show up in much wider swathes of the country.

"Just by looking at that, it looks like the Joros could probably survive throughout most of the Eastern Seaboard here, which is pretty sobering," Davis said in the statement.

Charlotte's Web
Experts Say That Those Giant Spiders Falling From the Sky Are Good, Actually
Mar 10
Read More
Unorthodox Urinal
Scientists Say They've Figured Out the Ideal Urinal for Not Splashing Back
Yesterday
Read More
Tone Deft
New AI Tells Children That Santa Isn't Real
Yesterday
Read More
+Social+Newsletter
TopicsAbout UsContact Us
Copyright ©, Camden Media Inc All Rights Reserved. See our User Agreement, Privacy Policy and Data Use Policy. The material on this site may not be reproduced, distributed, transmitted, cached or otherwise used, except with prior written permission of Futurism. Articles may contain affiliate links which enable us to share in the revenue of any purchases made.
Fonts by Typekit and Monotype.