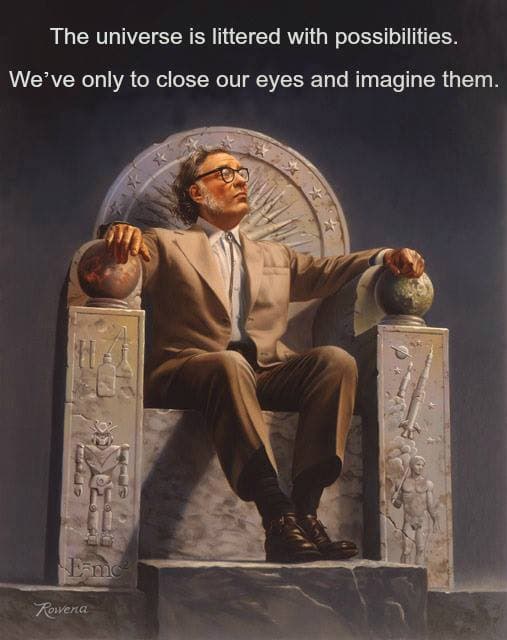 Science fiction, we can’t escape it. It’s quite literally everywhere we look. Whether it is the warp drive from “Star Trek” or the artificial intelligence from “I, Robot,” science fiction provides inspiration and information. It helps us to see the possibilities, and helps us to better understand current technology. More importantly, science fiction offers us a glimpse of where science is (or could be) heading.

One question that has plagued many individuals is, which preceded which? Did science fact beget science fiction? Or is it the other way around?

In truth, I suppose it is a silly question, because the answer is forever changing. Sometimes people will imagine fantastical things and, hoping to bring their imaginings to life, conduct scientific research that corresponds to this idea. In such cases, science fact springs from science fiction.

Conversely, individuals may study science for years and conduct advanced research that gives them a solid basis upon which to build their ideas. Then, once they have acquired enough knowledge, these individuals may step away from research to focus on their fanciful imaginings. In these instances, science fact breeds science fiction.

But regardless of the path that is taken, the main point remains: The best scientists, and the best writers of science fiction, have a firm understanding of scientific principles and a large knowledge base; they also have the ability to envision a myriad of possibilities—they see that the universe is littered with opportunities that just need to be articulated.

WHERE ASIMOV COMES IN:

Perhaps one of the most successful individuals to unite science fiction and science fact was Isaac Asimov. Throughout his career, Asimov wrote nearly 500 texts. He wrote books about the Bible, physics, chemistry, biology, astronomy, Shakespeare, Gilbert and Sullivan, ancient and modern history, and many other subjects. He wrote mystery novels, children’s texts, and (of course) science fiction.

Over the course of his career he won five Hugos and three Nebula Awards (and several other literary honors).

But Asimov was more than just an author; he was an acclaimed scientist. He graduated from Columbia University in 1939 with a bachelor of science degree, and earned a Ph.D. in chemistry there in 1948. The next year, he accepted an offer to teach at Boston University. He received the James T. Grady Award of the American Chemical Society in 1965 and awards from the American Association for the Advancement of Science in 1967.

Asimov supplied ideas for many of the most famous science fiction movies. He was Gene Roddenberry’s Science Adviser for “Star Trek the Motion Picture.” He also had many of his novels and short stories made into films, such as “I, Robot” and “Bicentennial Man.”

But although he wrote about space travel through countless universes and across millions of light years, Asimov himself refused to fly. "Isaac says that he loves to fly into space and span the galaxies," the editor Ben Bova once remarked. "But only in his imagination."

Sadly, Asimov died in 1992 from HIV complications, an infection that he had contracted from a blood transfusion years earlier. Because of the rampant prejudice related to the disease, Asimov kept his illness a secret, taking it with him to the grave.

But the tragedy of Asimov's death does not overshadow the greatness of his life. In this interview, Asimov discusses the ever-shifting boundary that separates science fact from science fiction. Throughout the discussion (indeed, throughout his career), Asimov attempted to highlight the advances in science and technology in order to help individuals prepare for the world of tomorrow. He used his writing to provide individuals with small glimpses of what the future might hold…and what it will take to get us there.

So take 10 minutes out of your day and give it a read. The knowledge and the hope that is contained within is inspiring. Make it a part of your life.