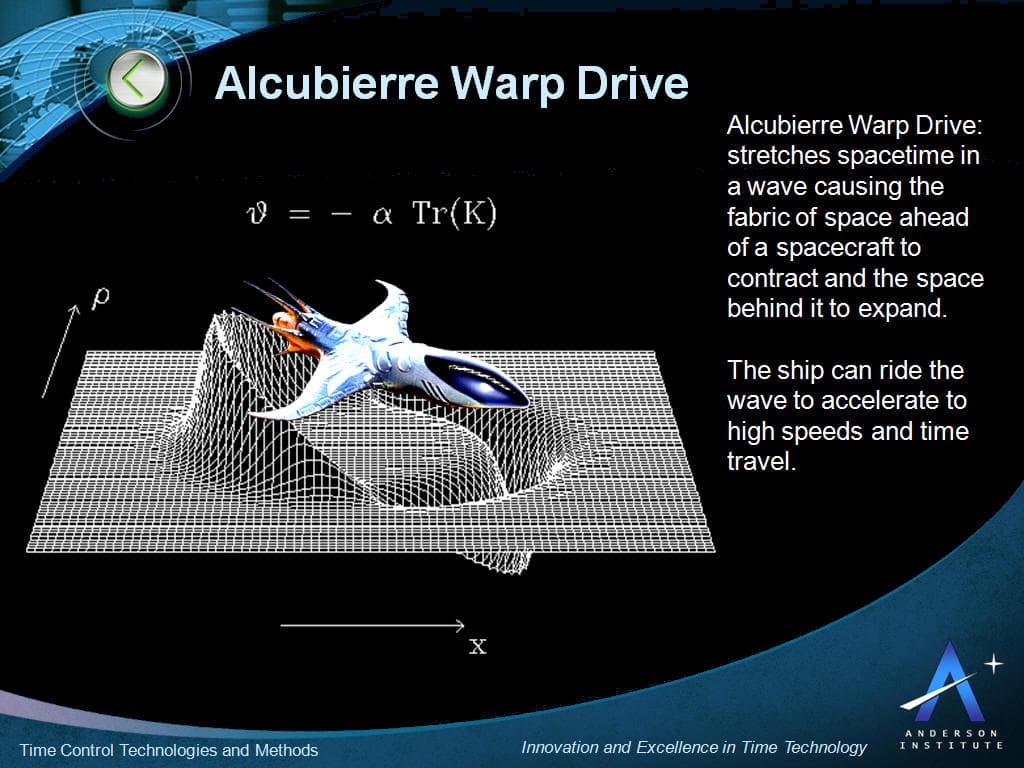 In the past, we have covered the feasibility of various forms of interstellar space exploration, along with a few of the proposed mechanisms that are based on technologies available to us today. Given NASA'S recent unveiling of a blueprint fora warp drive spacecraft, it is more important now than ever to put some perspective on a controversial issue and to gauge whether such a thing is actually within the realm of science fact, or if it belongs in science fiction.

To begin, the fastest current man-made object (Helios 2) would take 17 to 18 thousand years to reach our closest star, Proxima Centauri. These proposed spacecraft would reduce the journey time from millennia down to only centuries. Several generations would pass during the trip, and the ship would have to be entirely self-sufficient, recycling all food, waste and air.

But what happens when we want to go farther? If we don’t destroy ourselves, one day in the future, our descendants (man or machine) will go in search of a new planet outside the Solar System to colonize and live on. It is very unlikely that this planet will be as close to us as Proxima Centauri, so based on current technology it will still take us tens or even hundreds of thousands of years to reach these solar systems. Will future breakthroughs in science offer us a new key to alternative and faster ways to traverse space? As a result of the 100 Year Star-ship Symposium in 2012, the answer is very hopefully "yes."

Your initial thought – and quite rightly so – may be "surely we can’t shorten the trip too much unless we break the speed of light, and that just isn't possible." That statement is very true; however, we do have alternatives that are allowed by Einstein’s theories of special and general relativity. If you have watched Star Trek, you’re probably familiar with warp drive. This technology enables you to travel across vast distances of space that would otherwise take an incredibly long time to journey across using other (more conventional) means. It was always assumed these concepts were just restricted to fiction, but NASA scientists and engineers have been exploring ways in which we too can manipulate the universe and achieve faster than light travel.

The core idea behind this travel is not the propulsion we are familiar with, but instead, this method utilizes the flexibility of the fabric of space itself. The most practical design thus far has been a ring built around a smaller craft, which would expand space rapidly behind it. A warp bubble would shift space-time around it to effectively reposition space-time without moving relative to itself. From the inside, it would appear as though you were racing through space, when in fact there would be no acceleration whatsoever!

But the problem with this is the energy required to power it. We would need the energy-mass equivalent of a planet the size of Jupiter – which clearly isn’t feasible. But in 2012, at the 100YSS it was suggested by Harold White that we could actually achieve warp drive technology using the mass of a small car just by altering the geometry of the warp drive – quite an unbelievable mass difference. He said,

“I suddenly realized that if you made the thickness of the negative vacuum energy ring larger – like shifting from a belt shape to a donut shape – and oscillate the warp bubble, you can greatly reduce the energy required – perhaps making the idea plausible.”

Lab work has begun on testing the theories, and they are using an interferometer to measure very small flexes in space time that they create. “We will increase the fidelity of our test devices and continue to enhance the sensitivity of the warp field interferometer – eventually using devices to directly generate negative vacuum energy.”

White emphasizes that current work is strictly on paper and miniature experiments in the lab, but one day we could well have built a functioning warp drive. If successful laboratory tests are achieved, the possibilities of this technology incorporated in large scale projects are unbelievable. The impossible distances of space will instantaneously shrink, and human beings will have the opportunity to extend our reach not just through the solar system, but out across the galaxy (though whether that is good or bad is still up for debate)! We may well have our interstellar spaceship within an overtly optimistic 100 years.

A few noted physicist have made it clear that the issue extends far beyond the discussions about the physics and the technology of a warp-drive engine. Sean Carroll, a theoretical cosmologist famous for his popular science books, went on record saying;

"The Alcubierre warp drive is a very interesting arena for thought experiments to try to better understand general relativity and quantum field theory, but it should give you zero hope for actually building a spaceship some day. Some of the many problems are discussed on Wikipedia."

'In short, it requires negative energy densities, which can't be strictly disproven but are probably unrealistic; the total amount of energy is likely to be equivalent to the mass-energy of an astrophysical body; and the gravitational fields produced would likely rip any ship to shreds. My personal estimate of the likelihood we will ever be able to build a "warp drive" is much less than 1%. And the chances it will happen in the next hundred years I would put at less than 0.01%."

He, of course, also touched base on the cost of the endeavor. When referring to the research carried out by Harold White that suggests we would need far less energy for an Alcubierre Drive than originally expected, he said;

'"... note that "the mass-energy equivalent" of 700 kg (which I don't believe for a second, I suspect you need much more) essentially means you need 350 kg of antimatter to combine with 350 kg of matter (from here). They note that the current cost of producing 1 gram of antimatter is about $100 trillion. But, with completely unsupported optimistic estimates, you might get that down to $10 billion per gram. So, with the most wild-eyed pie-in-the-sky estimates, fuel alone will cost you $3.5 quadrillion — roughly the entire economic output of the world for forty years. Good luck with the Kickstarter!"