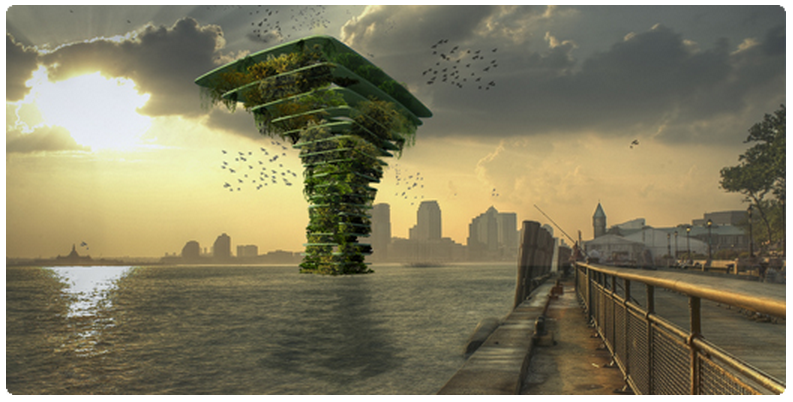 It's no secret that we've been facing multiple issues pertaining to the environment over the last few decades, from climate change, to pollution (intentional or not) and all of the things in between. It's also no secret that scientists and experts across the board from other fields have been looking at these situations from many different angles and trying to come up with out-of-the-box solutions. In one of the more futuristic examples, we come across the "Sea Tree."

Designed by Dutch architects, these artificial tower constructs would essentially provide a safe haven for flora, fauna, sea creatures and winged animals alike. Such things become all the more useful in larger cities lacking in open space; places where metal and concrete have overtaken nature.

So.. how exactly could adding another skyscraper make up for too many skyscrapers? Well, as the name seems to hint, these floating structures would be built for water, tethered to the ocean floor for various sea creatures to use. From there, they would bellow upward, gradually widening near the top.

"Urbanisation and climate change put a lot of pressure on available space for nature in city centres," explained Waterstudio, the firm behind the design, "but new initiatives for adding extra park zones to a city are rare." They continued, "Yet these kind of additional habitats for birds, bees, bats and other small animals could bring a lot of positive green effects to the environment of a city."

The benefits extend far beyond just that. According to the designers,

"The sea tree is built by offshore technology quite similar to the oil storage towers that can be found on open seas. The idea is that large oil companies donate a sea tree to a city showing their concern for a better city environment by using their own intellectual property."

"Space for this sea trees can be found on rivers, seas, lakes and even harbours. The height and depth can be adjusted depending on the location. The sea tree moves a bit along with the wind and is moored to the sea bed with a cable system. Under water, the sea tree provides a habitat for small water creatures, and, when the climate allows for it, artificial coral reefs."

"The beauty of the design is that it provides a solution and, at the same time, it does not cost expensive space on land, while the effect of the species living in the sea tree will affect a several mile zone around the moored location."

The project hasn't had a chance to get off the ground yet, but the designers believe the current rendition would cost about 1 million euros (1,283,100 USD) to complete. They did, however, shed some light on how they envisioned it in the first place. Saying:

"Inspiration came from a project in Holland where ecologists forced us to provide habitats for animals which couldn't be disturbed by people. Water is, of course, a perfect way to keep people away. The shape of a floating oil storage structures in Norway brought another inspiration combined with regular shapes of tree with a big crown in top."

"The concept idea is that we took park zones in urban areas, we divided this in pieces and put them vertically on top of each other, at the end it became a vertical hangout for wild life." they finished.

What are your thoughts? Is this a good concept? Does it have any potential drawbacks you can think of right off?