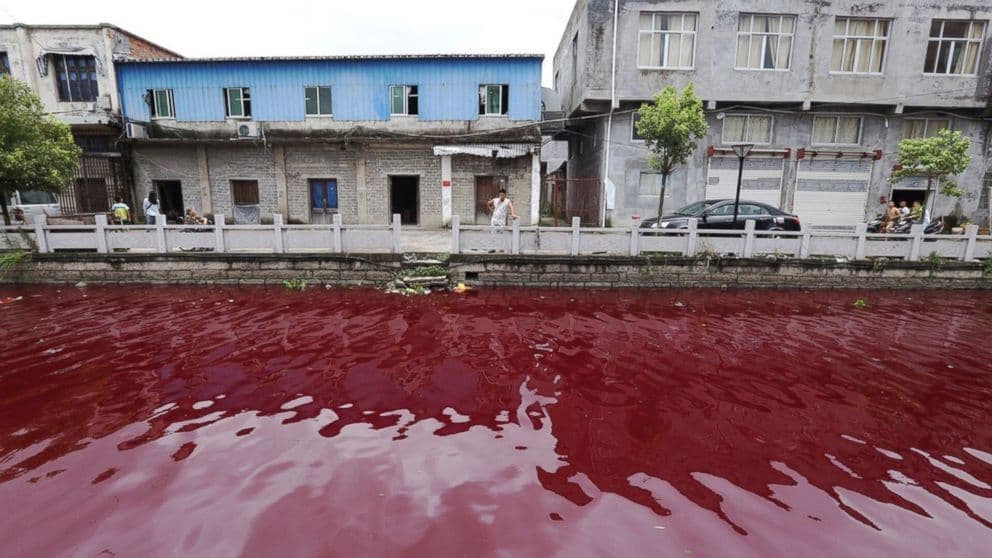 We all know that humanity has a bit of a problem when it comes to pollution. Here, see some of the most absurd instances of environmental pollution.

Last year,  green slime  — which was a mix of pollution and sewage — pervaded lakes and coastlines all across the United States. Unfortunately,  this slime was exceedingly toxic. It led to a number of deaths and the closing of beaches in 21 states. The pollution based concoction is known as "green algae." It is created from the run-off of phosphorous and nitrogen, which is leftover from livestock manure and the chemicals that are sprayed on agricultural products. So it seems that, in an attempt to keep our food products clean and safe from bugs, we are polluting our waters and devastating the local environment (which is entirely counter-intuitive, if you didn't pick up on it already).

This concoction resulted in the deaths of various oceanic and freshwater wildlife. Dolphins, manatees, birds, and fish all succumbed to this deadly mixture. This is extremely worrisome for a number of reasons, but perhaps most notably because there are only an estimated 5,000 manatees left in the wild. At least one human died as a direct result of swimming in a lake infested with algae, and countless others fell ill. Scientists believe that these deaths are the result of a type of bacteria that thrives in such environments, called Cyanobacteria. This bacteria has the ability to produce nerve toxins that prey on human flesh. When exposed, the toxins cause a number of different symptoms, including asthma-like symptoms, severe vomiting, diarrhea, and irritated skin or eyes.

Polluting our water to preserve our food seems a tad silly, but we continue the practice to this day (though the Environmental Protection Agency, and similar agencies across the globe, are working to develop clauses that will preserve the planet's water. For ourselves and future generations).

Earlier this week (July 25th), one of the lakes in the Zhejiang province (in China) turned blood red literally overnight. Residents also reported that it smelled strange. China is well-known for its smog pollution, but blood red rivers are a new development. It was truly perplexing for local authorities, scientists, and individuals who rely on the river for their sustenance. “The really weird thing is that we have been able to catch fish because the water is normally so clear,” one local villager commented on China’s microblogging site Weibo. This may seem like something out of the Biblical Exodus; however, with the investigation well underway, it seems that the cause is entirely man-made.

Inspectors do not have the results back yet; however, samples have been sent off for analysis. Along the river, there is a paper manufacturer, a food coloring company, and clothing-manufacturer. Early reports from the Wenzhou Environmental Protection Bureau indicate that, although the exact cause has not been determined, the water samples seem to reveal that the color was the result of illegal dumping in the river (ie. it was caused by someone polluting the water supply). The chief of the bureau, Jianfeng Xiao, said in a statement, “We suspect that somebody dumped artificial coloring in the water because he thought the typhoon yesterday [July 25th] would cause heavy rain, and nobody would notice [the color].” However, contrary to the weather predictions, there was no heavy rain, which means the coloring was not washed away. As a result, the culprit's deeds were left for all to see.

Of all of the places on Earth for the oldest tree to be located, Nevada seems like a rather strange home, but it's entirely true. Prometheus — a Great Basin Bristlecone Pine tree — lived an unassuming life near a treeline on Wheeler Peak in Nevada. Unfortunately, its unassuming nature led to its downfall. You see, you can't tell the exact age of a tree just by looking at it. For the most part, trees of the same species all look pretty much the same. The only way to tell the age is by carbon dating or by counting the rings. Still, it is easy enough to tell when a tree is probably  a little bit ancient, as the general rule is, "the larger the tree, the older it is." So you would think that large trees would be protected, or sacred...or at the very least, that researchers would stop and think before heading for the saw. But that's not how things work in reality.

This brings us to Donald Rusk Currey. In 1964, the researcher from the United States Forest Service decided that chopping down a rather large tree to study its rings would make for a good science experiment. And it was fun. Until the research team discovered just how old the tree was.  We aren't exactly sure how old it was, as techniques were not terribly refined at that time, but it's estimated that the tree was between 4,000 and 5,000 years old (easily as old as the oldest known tree). But to be fair, Currey and his associates claim that they had no idea the tree was so old when they went forward with cutting it down, but that has been cast into doubt by at least one person involved in the research.

In short, it's clear that we learned nothing from that whole cherry tree fiasco.

One of the more catastrophic "accidents," took place in 2012, when Russ George — a businessman from the Haida Salmon Restoration Corporation in California — purportedly dumped more than 220,462 pounds (100 tonnes) of iron sulfate into the Pacific Ocean. Why would he do this, you might ask? Well, George hoped that his little scheme would help spark a boom in the local population of salmon fish, but what he didn't count on was the chain reaction his actions would start. You see, instead of driving up salmon populations, the $2,000,000 iron sulfate he dumped just off the west coast of British Columbia actually incited an unprecedented growth of phytoplankton. A growth so large that it spanned some 3,861 square miles (10,000 square kilometers), large enough to be seen from space.

Of course, this bloom caused a dramatic shift in the food chain and significantly disrupted the habitat of the affected area. And George was not acting alone. Rather, he was working on behalf of Haida Salmon Restoration Corporation. Notably, similar small-scale fertilization trials were conducted in the past; however, they were aimed at helping scientists understand how the process works and to seek out any unintended consequences. The new dump did just the opposite. It was a kind of "hack and slash" tactic that has dramatic (and unfortunate) consequences. In some areas, the lack of oxygen has the opposite impact, and decreased the diversity and viability of life.

The idea, while terribly misguided, wasn't totally ignorant. Iron-based compounds essentially act like fertilizer, only for the ocean. It's especially useful in regions lacking sufficient amounts of iron. When available in decent quantities, phytoplankton colonies excel, leading to a boost in productivity that lasts for a small period of time.Phytoplankton has an extremely important role in oceanic ecosystems (and perhaps to the environment itself), but too much of it is an extremely bad thing. For starters, as previously mentioned, a huge concentration of it in one place can suck the region of its oxygen supply AND prevent certain forms of life from deriving energy from the sun (their power source), but for what its worth, they also do some good. While sucking up oxygen, they also absorb carbon dioxide (you know, one of those pesky greenhouse gases that are driving global warming) and drop it on the ocean floor. Regardless of the potential upsides, the incident spawned an investigation carried out by "Environment Canada’s"enforcement branch. Needless to say, the investigation was well deserved.

Can you think of any other notable entries? Add them in the comments.