How to Talk to Your Family About the Metaverse

Soon, you’ll be able to mute your annoying uncle over a virtual Thanksgiving table. 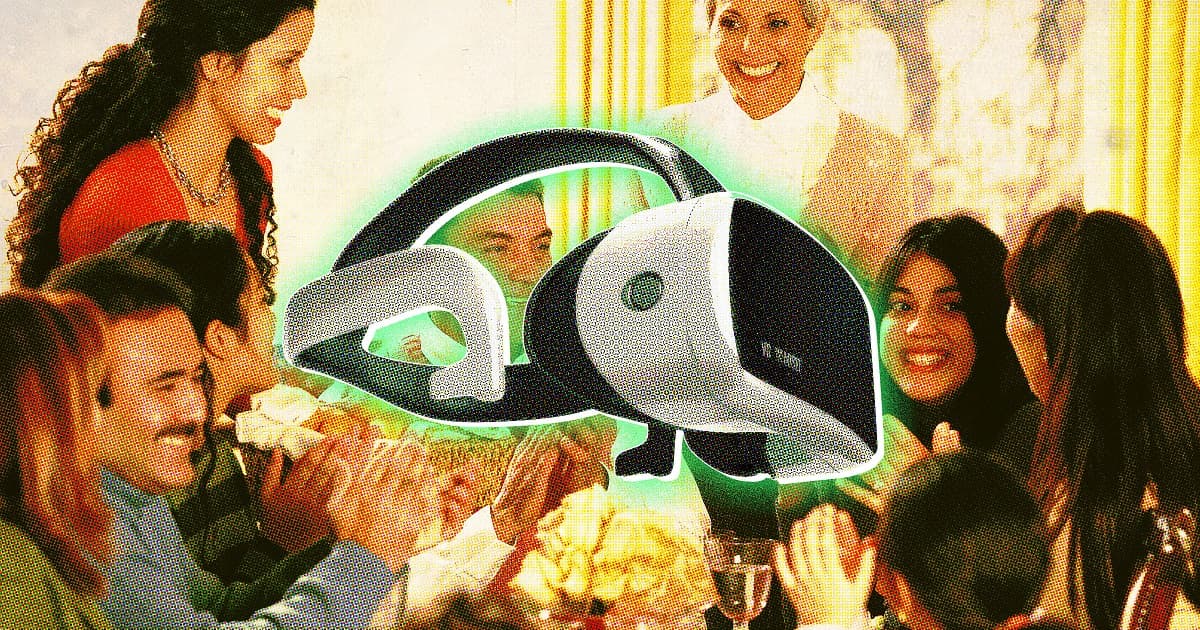 With the news of Mark Zuckerberg's new pet project to create a fully-digital world, the metaverse is a topic that’s getting more buzz than ever. Naturally, your mom or dad might have a few questions about it when it comes time for Thanksgiving. Heck, you might have a few of the same questions yourself.

Well, have no fear: We’ve created a handy guide with all the essential talking points you need to get through a conversation with your friends and family about the metaverse.

Between Bites of Stuffing

The metaverse is a term used to describe a complete virtual reality (VR) or augmented reality (AR) world where people use digital avatars to interact with each other.

The term "metaverse" was first coined in Neal Stephenson’s 1992 sci-fi novel "Snow Crash." However, the concept remained niche until it was broadly popularized in Ernest Cline's 2011 "Ready Player One." Both stories present the metaverse as a dystopian, escapist tool wielded by the powerful in order to control the masses by putting them into a perpetual state of complacency and distraction — but, confusingly, both authors seemed to think that living in the metaverse would be kinda cool.

The concept is in the news once again because back in October, Facebook rebranded itself as "Meta" and announced sweeping plans to develop a fully-realized metaverse for totally non-evil and non-dystopian reasons. In his announcement, CEO Mark Zuckerberg described the metaverse as a massive online platform that’ll allow users to create digital avatars, meet and interact with friends, and create AR overlays over existing physical spaces. Oh, and for some reason, nobody has legs.

Many experts are rightfully apprehensive about the project, including Facebook’s own VR expert John Carmack, who said recently that he’s been "actively arguing against every single metaverse effort" that the company has put forth for years. While there are a few reasons for the backlash, the most substantive stem from privacy concerns as well as perceptions that the metaverse needs to be a larger, community-led effort rather than centralized by an evil mega-corp (hey, kind of like in "Ready Player One"!)

If You Wanna Get Disowned

Explain to your parents that you want Thanksgiving and Christmas to be held via metaverse from now on, so you can roleplay as your digital fursona avatar — or tell 'em that you’d rather be able to mute dad when he goes on one of his libertarian rants again.

More on the metaverse:

Read This Next
Will Somebody Think of the Children?
Mom Horrified by What Her Kids Are Seeing in Roblox
Scammers Scam On
The Fyre Fest Guy Is Off House Arrest and of Course His New Scheme Involves the Metaverse and Crypto
Confrontation is Hard
Former Facebook Exec Says Zuckerberg Has Surrounded Himself With Sycophants
Virtual Signing
Sign Language in Virtual Reality Actually Looks Kinda Awesome
Zesus
Interesting Theory: Mark Zuckerberg Is Trying to Become God and Build Heaven
More on Future Society
Bird Crap
Yesterday on the byte
It Looks Like Elon Musk Is Actually Building a Twitter Payment Platform
Balloon News
Friday on futurism
China Says "Spy Balloon" Soaring Over America Is Completely Innocent
Down in Flames
Wednesday on the byte
Elon Musk Apparently Thinks Twitter Is a "Flaming Dumpster Rolling Down the Street"
READ MORE STORIES ABOUT / Future Society
Keep up.
Subscribe to our daily newsletter to keep in touch with the subjects shaping our future.
+Social+Newsletter
TopicsAbout UsContact Us
Copyright ©, Camden Media Inc All Rights Reserved. See our User Agreement, Privacy Policy and Data Use Policy. The material on this site may not be reproduced, distributed, transmitted, cached or otherwise used, except with prior written permission of Futurism. Articles may contain affiliate links which enable us to share in the revenue of any purchases made.
Fonts by Typekit and Monotype.