How to Talk to Your Annoying Family About Vaccines 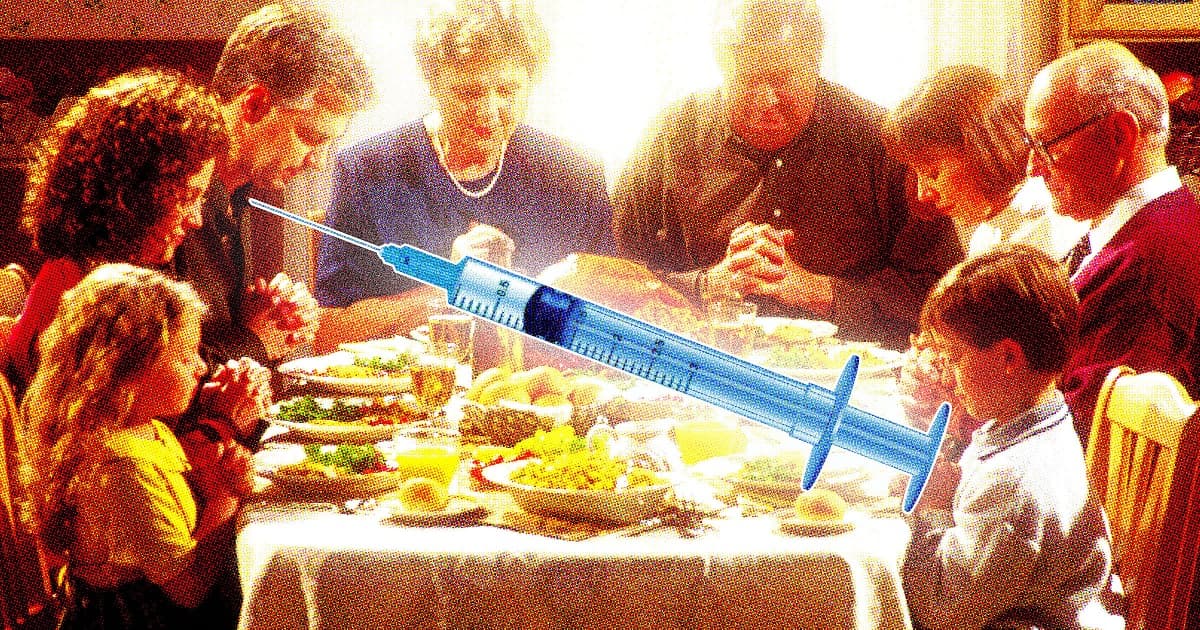 Congratulations! You're lucky enough to be seated, in relatively safety, around the Thanksgiving table in-person this year with your annoying family instead of having to do so over Zoom and/or risk catching the plague that, at this time last year, had no vaccine.

But wait! What's that your irritating aunt just said about how her neighbor — who's a nurse, by the way — told her something about COVID vaccines making women infertile?

Roll your eyes, take another bite of stuffing, and have a sip of cider to fortify yourself. We've got your back.

Between Forkfuls of Cranberry Sauce

All major health authorities, from the Centers for Disease Control and Prevention to the World Health Organization, have issued full-throated endorsements of these miraculous vaccines and shot down all of the major concerns about their purported negative health effects.

Oh, great, someone just shouted that there's 5G in the vaccine. Buckle in, folks — we're in for a bumpy ride.

First of all, you should explain to your fellow Thanksgiving attendees that 5G is literally just a term that describes how we're up to the fifth generation of broadband cell networks — and that in 2021, the technology to put a microscopic, magnetic tracking chip inside of a vaccine solution simply doesn't exist.

"That microchip would have to have an associated power source, and then in addition, that power source would have to transmit a signal through at least an inch of muscle and fat and skin to a remote device," Dr. Matt Laurens, a University of Maryland pediatric disease specialist and researcher for COVID vaccine trials, told CNBC. Simply put, the good doctor said that kind of tech "just doesn’t make sense."

That should be enough to quell your Infowars-subscribing cousin, but what about your well-intentioned neighbor who's clearly been watching a lot of Fox News since she retired last year?

One of the biggest concern-trolling complaints about the vaccination effort is that there wasn't enough research put into mRNA vaccine technology. It might not be as ridiculous-sounding as the 5G conspiracies, but it's equally untrue.

Ribonucleic acid, or RNA, is like Deoxyribonucleic acid (DNA) except that it's a single strand rather than the two that make up DNA's distinctive double-helix pattern. mRNA, as this actually very useful Study.com science lesson for children explains, is "like a piece of mail sent to the ribosomes" — an instructive messenger that tells the proteins that make up DNA how to replicate themselves ("don't worry," the Study.com lesson continues, "it doesn't need a stamp!")

The existence of mRNA itself was, as Johns Hopkins' Bloomberg School of Public Health noted in this handy history explainer, discovered in the 1960s, and by the 70s scientists had already begun researching ways to "deliver" it into cells. It "took a great deal of innovation" to actually get synthetic mRNA into bodies, which is why it took scientists a couple of decades to start trials, first on mice in the 90s and eventually humans in the 2010s.

So fine, you've convinced them that this "new" vaccine technology didn't just spring up out of nowhere. But what about all those reports of people having bad reactions and getting scary-sounding diseases like Bell's palsy?

Imagine that, we have an explanation for that one too!

While there have been plenty of instances of people having adverse reactions — yes, including some Bell's palsy-like symptoms — the relatively-minor risk of having that kind of reaction is, according to researchers, far outweighed by "the beneficial and protective effects of the inactivated COVID-19 vaccines." This comes per a study in The Lancet, the medical journal that was literally the first and only one to publish (and subsequently retract, years after it did its damage) that one falsified paper linking vaccines to autism.

If They Still Insist on Trolling

Tell them to fuck off and leave in a huff — the less time you spend breathing the same indoor air as likely-unvaccinated idiots, the better.

Read more: "Gene Simmons to the Unvaccinated: 'You Are an Enemy'"

More on long COVID: "COVID May Have Messed Up One Million Americans' Sense of Smell"

Read This Next
Walls Up
China Is Building a Huge New Wall to Allegedly Keep COVID Out
Sympathy for the Devil
Vegan Anti-Vaxxer Dies of COVID After Opposing Vaccine Animal Testing
Post Through It
How to Talk to Your Family About Elon Musk
Thankful for Crypto?
How to Talk to Your Family About Cryptocurrency
Bored with Magnets
Physicist Tries to Build Device to Prevent Coronavirus, Gets Magnets Stuck Up Nose
More on Future Society
I Silence Thee
Yesterday on futurism
Leaked Messages Seem to Show Elon Musk Using Twitter to Punish His Enemies
Gas Giant
Friday on the byte
Journalist Eats Lab-Grown Chicken, Gets "Weirdly Gassy"
Musk Rats
Thursday on the byte
Twitter Is Quietly Re-Suspending the Lunatics Elon Musk Let Back On
READ MORE STORIES ABOUT / Future Society
Keep up.
Subscribe to our daily newsletter to keep in touch with the subjects shaping our future.
+Social+Newsletter
TopicsAbout UsContact Us
Copyright ©, Camden Media Inc All Rights Reserved. See our User Agreement, Privacy Policy and Data Use Policy. The material on this site may not be reproduced, distributed, transmitted, cached or otherwise used, except with prior written permission of Futurism. Articles may contain affiliate links which enable us to share in the revenue of any purchases made.
Fonts by Typekit and Monotype.