A lawsuit, bad blood, and a series of zinging disses between Elon Musk and a rival startup — explained. 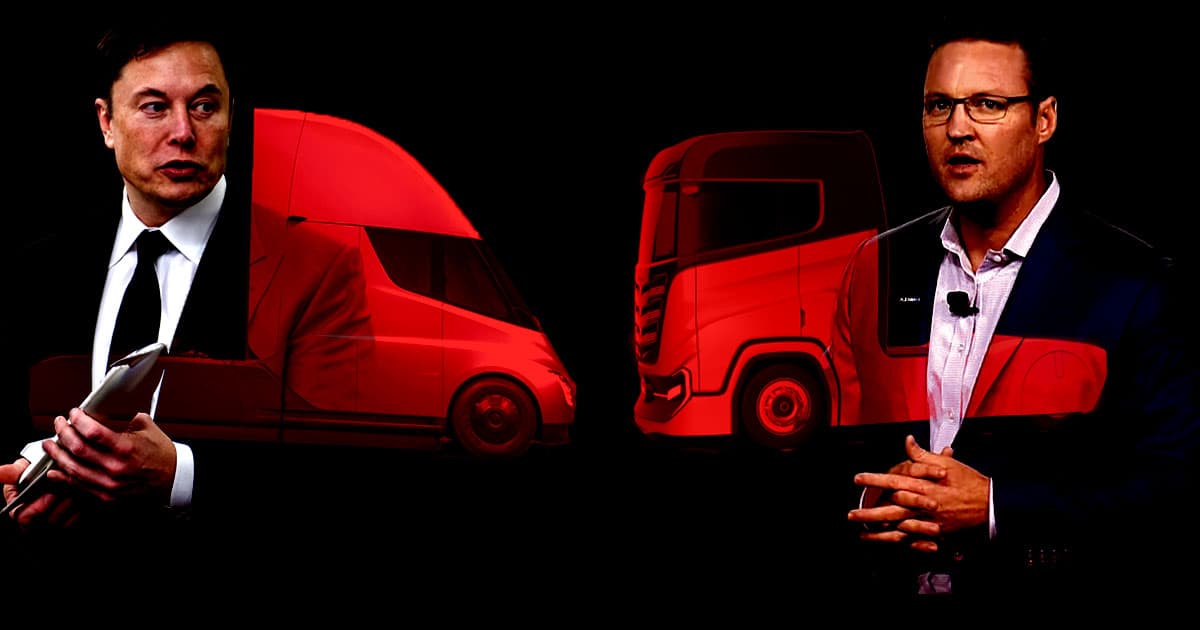 After it went public a few weeks ago, stocks for the electric and hydrogen-powered car startup Nikola Motors soared enough to give it a valuation of over $20 billion, a princely sum that surpassed valuations of both Ford and Fiat-Chrysler, two of America's oldest automakers.

Nikola's promise is to revolutionize trucking in the US using hydrogen fuel cells, technology that turns potential energy from molecular bonds in hydrogen into electrical energy.

But not everybody is buying that hydrogen is the future of long-haul transportation. After Nikola's great financial run, Tesla's outspoken CEO Elon Musk tweeted that "Fuel cells = fool sells," on June 11. Musk and his fans took to mocking the concept of hydrogen fuel cells, with Musk deriding the tech as "staggeringly dumb."

It's worth pointing out that Musk isn't a neutral party. Tesla announced that its own semi truck is officially going into "volume production" earlier this month — less than a week after Nikola Motors went public. And, of course, he might feel defensive about another auto company naming itself after famed inventor Nikola Tesla.

Nikola is also taking aim at Musk's pet project at Tesla, the long-awaited Cybertruck, a stainless steel monstrosity intended to appease the pickup market. In February, Nikola unveiled the Badger, its own take on the pickup truck, with an estimated 600 mile range thanks to a combination of hydrogen fuel cells and lithium ion batteries.

In an interview with Observer today, Nikola CEO Trevor Milton responded to Musk's provocations — with a series of counterattacks couched in polite disinterest.

"I think it’s kind of a compliment," Milton told Observer, referring to the fact that Tesla announced it would ramp up production of its Semi truck the same week Nikola went public.

"I mean, it’s nice to know that we’re affecting Elon’s decisions," he added. "We have nothing against Tesla. But you can definitely tell that we’re scaring them because now he’s dedicated all of Tesla’s resources to the semi truck project."

To Milton, the idea of of generating hydrogen to use it as energy storage for a truck makes sense, since "in trucking, weight is everything," as he told Observer. "How much a truck weighs empty determines how much freight it can move."

"Hydrogen is also much lighter," he continued. "A hydrogen semi truck can weigh up to 10,000 pounds lighter than a battery electric truck."

He also specifically dissed the Cybertruck, a move that seems calculated to raise Musk's ire further.

"I grew up on a farm, and I’ve owned trucks my entire life," he told the newspaper. "I think Tesla’s Cybertruck isn’t built for real truck owners; they are built for Tesla fanatics."

Even with its grand hydrogen fuel cell ambitions, Nikola had to resort to adding a lithium ion battery to its hydrogen-powered pickup. "Because I don’t believe one size fits all," Milton told the Observer.

But do hydrogen fuel cell-powered trucks, let alone cars, really stand a chance of becoming commonplace? For years, Tesla has been investing resources into building out a Supercharger network to enable Tesla owners to charge their cars on the go — and quickly, without having to wait hours at the gas station.

When it comes to hydrogen cars, at least in the US, chargers are few in far between. According to a map by the US Department of Energy, there are only 47 hydrogen fueling stations in the US and Canada, with the vast majority in California.

As expected, Nikola is planning to change that with plans for 700 hydrogen stations across the US for semi trucks, according to Milton.

With so few available hydrogen chargers, consumer demand has been predictably slow. Only a handful of hydrogen fuel cell powered vehicles are currently on sale in the US, and sales have been sluggish, with fuel cell car sales actually dipping in 2019. The top seller, Toyota's Mirai, sold only 1,502 units that year.

It's a catch 22: Without chargers, demand isn't going to increase much. Without demand, companies are less likely to invest in the technology and building out charger infrastructure.

The range isn't the question. A 2020 Toyota Mirai can already drive over 300 miles on a full tank of hydrogen according to official EPA ratings.

It's somewhat reminiscent of the early days of the electric vehicle. In 2010, practically nobody was buying an electric vehicle in the U.S., according to government sales figures. Years later, dozens of models from a variety of international carmakers are selling hundreds of thousands annually.

The million — or billion — dollar question: Will we see the same spectacular rise in the sales of hydrogen-powered cars?

Nikola is flipping Tesla's approach on its head, by starting with long-haul trucking and then following up with consumer vehicles.

"To be honest with you, there’s a lot of money to be made in selling trucks, whereas there’s almost no money in [selling] cars," Milton told the Observer. "That’s why we love trucking."

Trucking in the US is a massively important industry, generating over $700 billion in 2017 alone. Trucking accounts for 71 percent of all freight in the US with truckers making up almost six percent of the entire full-time job market.

In 2016, Nikola first unveiled its first futuristic hydrogen truck, the Nikola One, with the Nikola Two and Tre following in 2019. The company still has yet to make a single dollar in revenue.

That didn't stop the company from suing Tesla in 2018 for two billion dollars. Its claim: Tesla's semi truck, announced in 2017, looks too damn much like their own. Design patents were upheld in court back in April, with the lawsuit moving forward. Nikola's Tre however bears almost no design similarities with Tesla's semi.

But hydrogen power does have a significant Achilles heel, with its current tech riddled by inefficiencies.

According to current studies, electric cars achieve efficiencies of anywhere between 70 and 90 percent, depending on the model and how much energy it takes for electricity to be transported prior to storage. In contrast, "45 percent of the energy is already lost during the production of hydrogen through electrolysis," read a March 2020 press release by Volkswagen. "Of this remaining 55 percent of the original energy, another 55 percent is lost when converting hydrogen into electricity within the vehicle."

That would give hydrogen-powered cars an efficiency of only 25 to 35 percent.

"In concrete terms this means that a hydrogen car consumes two to three times more electricity for the same distance than a battery car," the statement concluded. "But we cannot afford this kind of energy waste."

Yet Milton argues that hydrogen could still win.

"Everyone has inefficiency," he told the Observer. "Do you know how much inefficiency there is in the grid that burns natural gas or coal to power an electric car? It’s weight and the cost-per-mile to move a vehicle that matter."

Milton's dream is to make powering a hydrogen truck cheaper than a diesel or battery one. It's a tall order that will end up heavily depending on the renewable energy sector as well since that's where Nikola wants its energy to come from to generate hydrogen fuel.

The CEO is optimistic.

"We are a brand new company, so all we have to go is up," he told Observer. "It might take some time to get there. But investors are patient with us."