Have Scientists Discovered a New Physics? 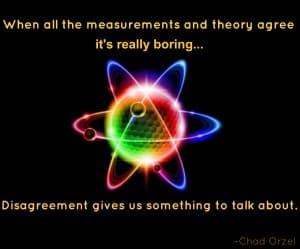 Have you ever heard someone say that “size doesn’t matter?” Well, this can be true for a lot of things…but it’s not true in physics. At least, not when it comes to subatomic particles, like protons.

Along with neutrons and electrons, protons are one of the primary ingredients of an atom. And atoms, of course, come together to make our bodies, our world, and all the universe that we see around us. So understanding the inner workings of an atom, and the various particles they contain, is obviously quite important.

Last year, an international team of scientists attempted to verify the actual size of a proton by probing it with muons (previous experiments used electrons). And their conclusions lead them to believe that the proton isn’t exactly what we thought it was. Or at least, it isn’t the exact size that we thought it was (which almost amounts to the same thing). The researchers found that the particle's radius is 0.84087 femtometers (a femtometer is one quadrillionth of a meter). The problem is that the measurement differs from those obtained by other methods by about 4%.

This difference poses a bit of a problem.

One possibility is that the team has discovered new physics. If the smaller size is correct, then it seems that there's something missing in physicists' understanding of quantum electrodynamics (which governs how light and matter interact). There is a small possibility that muons interact with protons differently than electrons do, but the current understanding of physics has been tested and retested. So it seems unlikely that there is really a fundamental difference between muons and electrons.

Another possibility is that there is some error in the data, either in the earlier work or in the latest research. However, in all instances, researchers have combed back over their findings; theorists have recrunched their equations; these tests have been verified and reverified. So an error is high improbable.

Yet another possibility is that there is a piece of the calculations for the proton's size that is missing. Swiss physicist Aldo Antognini states that it is possible that we don’t yet fully understand the structure of a proton. Currently, scientists simply don’t know what has caused this discrepancy.

But, let’s assume for a moment that this experiment has revealed some new physics. Does this mean that our entire understanding of physics has been turned on its head? That everything we once believed in is a lie? That we really know nothing about the universe or the laws that govern it?

Rather, as we continue to conduct experiments we gain knowledge. Of course, we have to adapt our understanding to fit this new knowledge, which generally takes a bit of time to work out. That makes sense, right?

Well, that’s the beauty of science; it’s all about progression and moving into new frontiers. In fact, this revelation might offer new insights into one of the most well-tested theories in physics, further solidifying our understanding of the universe. It’s a little early to say. But I, for one, am hopeful.