It's the first time such a glow has been observed around a planet other than Earth. 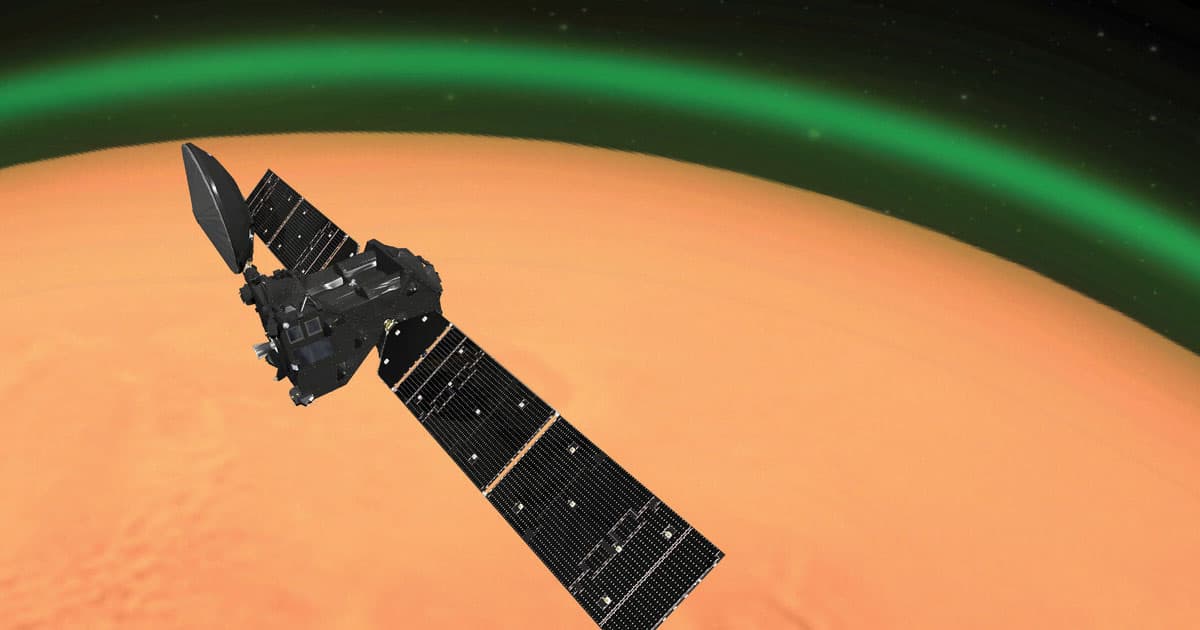 Scientists have identified a green glow in the atmosphere of Mars caused by sunlight releasing oxygen atoms from carbon dioxide — the first time such a glow has been observed on a planet other than Earth.

As oxygen is abundant in Earth’s atmosphere, a similar one can be observed from the International Space Station. It’s the same effect that gives auroras their green hue.

“One of the brightest emissions seen on Earth stems from night glow,” Jean-Claude Gérard of the Université de Liège, Belgium, and lead author of the new study published in Nature Astronomy today, said in a statement. “More specifically, from oxygen atoms emitting a particular wavelength of light that has never been seen around another planet.”

Scientists have predicted this green glow to occur on Mars as well for roughly 40 years. Only now — thanks to the European Space Agency and Russian space agency Roscomos’s ExoMars Trace Gas Orbiter (TGO), which entered the Red Planet’s orbit in 2016 — were we able to confirm the phenomenon.

The researchers put the TGO in a special observing mode and pointed its instruments directly down at Mars. According to data collected between April and December of last year, they found evidence of the green oxygen glow in all altitudes ranging from 20 to 400 kilometers, with the strongest at 80 kilometers.

“We modeled this emission and found that it’s mostly produced as carbon dioxide, or CO2, is broken up into its constituent parts: carbon monoxide and oxygen,” Gérard explained. “We saw the resulting oxygen atoms glowing in both visible and ultraviolet light.”

“The observations at Mars agree with previous theoretical models but not with the actual glowing we’ve spotted around Earth, where the visible emission is far weaker,” Gérard added. “This suggests we have more to learn about how oxygen atoms behave, which is hugely important for our understanding of atomic and quantum physics.”

The discovery could also prove helpful for future missions to Mars. For instance, studying the Martian atmosphere could tell us about atmospheric density and how it could interact with satellites and landers.

More on Mars: This Plan For a Martian City Under a Dome is Breathtaking