"Our goal is not to generate any new organism, any monster." 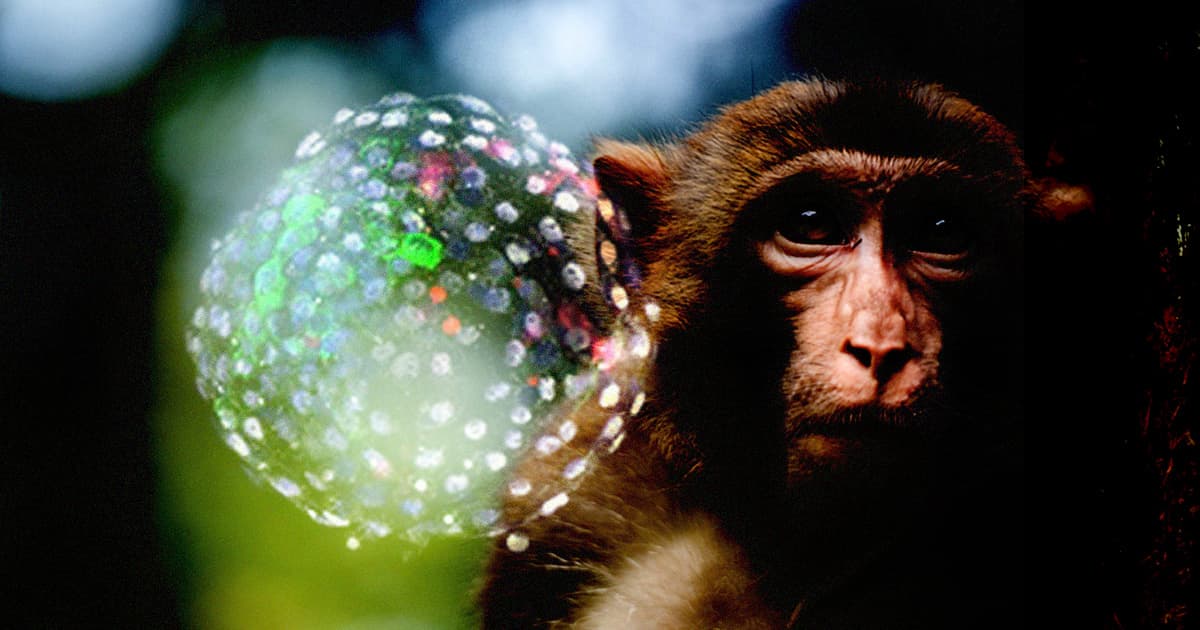 For the first time ever, NPR reports, an international team of scientists have created chimera embryos that are made up of both human and monkey cells.

The research, as detailed in a paper published in the journal Cell today, is meant to help scientists find new ways to grow organs intended for human transplants.

Finding organs available for transplant is becoming increasingly difficult in the United States every year. Stem cell research is hoping to find an alternative, combining human with animal cells from pigs and sheep to see if we could ever be able to grow human organs in those animals.

In the experiment, the scientists injected 25 "induced pluripotent stem cells" from humans into 132 six-day-old macaque embryos, which are far more genetically related to us humans than sheep and pig.

The human cells grew inside all 132  of the embryos after just 24 hours. After ten days, 103 chimeric embryos remained. By day 19, however, only three chimeras were left alive – and they were then terminated.

"This knowledge will allow us to go back now and try to re-engineer these pathways that are successful for allowing appropriate development of human cells in these other animals," Juan Carlos Izpisua Belmonte, genetics professor at the the Salk Institute for Biological Sciences in La Jolla, California and co-author of the study, told NPR.

"We are very, very excited," he added.

"Our goal is not to generate any new organism, any monster," Belmonte told the broadcaster. "And we are not doing anything like that. We are trying to understand how cells from different organisms communicate with one another."

The researchers say that the fact that they saw human cells growing at such a high rate could be a breakthrough.

"Historically, the generation of human-animal chimeras has suffered from low efficiency and integration of human cells into the host species," Belmonte said in an official statement.

Eventually, the researchers want to investigate whether they can find new ways to screen for drugs and potentially generate transplantable cells, tissues, and even organs.

Some of the same scientists created human-pig chimeras back in 2017, introducing human cells into pig embryos and incubating them for four weeks. That experiment marked the first time human cells could be detected growing inside embryos of another species.

The number of grown cells in that trial fell far short of expectations. The new study, however, experienced significantly higher rates of human cell growth.

Then in 2019, scientists in China created pig-monkey chimeras, injecting macaque DNA into pig embryos. The pigs eventually were born inside a lab, but died within a week.

Despite the latest successes, the research raises a number of ethical questions.

"My first question is: Why?" research fellow at Rice University's Baker Institute Kirstin Matthews told NPR. "I think the public is going to be concerned, and I am as well, that we're just kind of pushing forward with science without having a proper conversation about what we should or should not do."

Read This Next
This Week in Science
This Week in Science: Oct 27 – Nov 2
Futurism
Scientists Announce New Animal-Human Hybrid Experiment — This Time With Sheep
Futurism
Scientists Move Closer to Creating the First "Human/Pig Chimera"
Futurism
Growing Lungs: Scientists Are Using Stem Cells to Try and Grow Human Lungs in a Dish
Futurism
Scientists Confirm: Reprogrammed Adult Stem Cells Perfectly Mimic Embryonic Stem Cells
More on Hard Science
Big Dark Energy
Aug 12 on the byte
Huge Empty Voids in Universe May Be Generating Dark Energy, Scientists Say
Big Boom
Aug 12 on the byte
One of the Brightest Stars in the Sky Is Acting Bizarre, Scientists Say
Dark Secrets
Aug 3 on futurism
Scientists Just Detected the Oldest Dark Matter Ever Observed
READ MORE STORIES ABOUT / Hard Science
Keep up.
Subscribe to our daily newsletter to keep in touch with the subjects shaping our future.
+Social+Newsletter
TopicsAbout UsContact Us
Copyright ©, Camden Media Inc All Rights Reserved. See our User Agreement, Privacy Policy and Data Use Policy. The material on this site may not be reproduced, distributed, transmitted, cached or otherwise used, except with prior written permission of Futurism. Fonts by Typekit and Monotype.