Scientists Just Cloned Monkeys. Humans Could Be Next.

Though human cloning may still be a ways off, there's no going back. 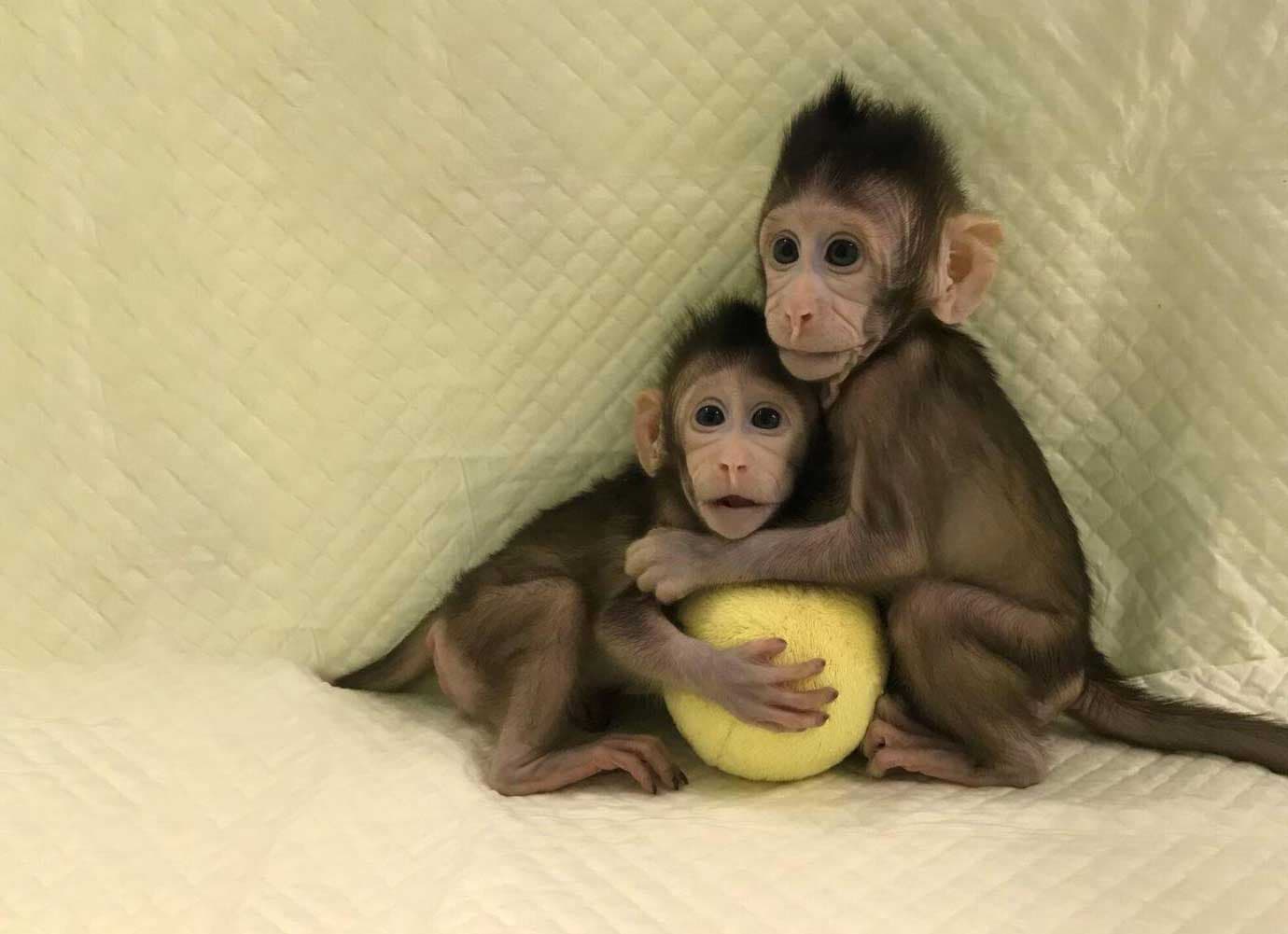 Since the birth of Dolly the sheep in 1996, scientists across the globe have used the same technique to clone nearly two dozen other animal species, including cats, dogs, rats, and cattle. Primates, however, had proven resistant to the process — until now.

In a new study published in Cell, a team of Chinese researchers led by Qiang Sun at the Chinese Academy of Sciences Institute of Neuroscience in Shanghai reveal that they've found a way to tweak the Dolly cloning technique to make it work in primates. Their efforts have resulted in the birth of two cloned female macaques: Zhong Zhong and Hua Hua.

The technique used to clone Dolly, somatic cell nuclear transfer, involves replacing the nucleus in a donor egg with a nucleus taken from a cell from another animal. After scientists use an electric current to make the egg believe it has been fertilized, it will start to develop into an embryo that can then be implanted into a surrogate for gestation. The animal that results from the pregnancy will be a genetic copy of whatever animal donated the nucleus.

In primates, the process has traditionally failed at the blastocyst stage of embryonic development. To get past this hurdle, Sun's team added two new elements to the usual collection of nutrients and growth factors that are typically introduced to embryos prior to surrogate implantation. Those new elements, a compound called trichostatin A and messenger RNA, helped direct the DNA to grow properly by prodding hundreds of genes necessary for successful embryonic development into action.

True, those numbers don't sound too impressive, but it's remarkable progress.

The Future of Research

While the Chinese team isn't the first to clone a primate, they are the first to do so using a modified version of the Dolly method. This has long been a goal of researchers because it offers a big advantage over the previous method, which involved splitting an embryo after fertilization. While that technique could only produce a maximum of four cloned animals, the Dolly method could theoretically lead to an unlimited number of clones.

The ability to create sets of genetically identical macaques will likely be extremely valuable for medical research.

Macaques are closer to humans genetically than mice, so insights gleaned from testing on them is far more likely to translate to humans. Using cloned animals instead of ones that are simply related also adds a level of precision to the testing by creating a true "control."

Entire groups of macaques with genes linked to Alzheimer's, Parkinson's disease, or cancer could be developed in the lab, and doctors could test different treatments on the animals to get an accurate idea of how they'd respond. They could also make minor tweaks to the genes of one animal to see how it developed differently from the rest of the population.

Some may be concerned that the successful cloning of macaques puts us one step closer to cloning humans. However, study co-author Mu-Ming Poo told National Geographic that the team has no intention of applying their method to humans. They don't really have any incentive to do so, either, according to Peter Andrews, a professor in the University of Sheffield's department of biomedical science.

“It could be a step towards human cloning, but why would you do it?” Andrews told New Scientist. “In terms of human biology, it’s illegal to clone a human in Britain and many other countries, and I don’t think anyone would rationally want to do it.”

Given the low rate of success for the Chinese team's technique, we aren't yet at the point when researchers can easily create armies of cloned primates in the lab. However, if the group is able to perfect the procedure, the names Zhong Zhong and Hua Hua could become as synonymous with cloning achievements in the future as Dolly is right now.

But here's the thing to remember: we have broken the technical barrier to cloning humans, and there's no going back. While national and international regulations prevent human cloning, not everyone abides by the law. Something that we must realize is that scientific advancements aren’t always determined by what we should do but simply what we can do. We can ban whatever science we want, but we can’t stop it.

Perhaps it’s time to ask ourselves whether it might be time to consider regulation instead of prohibition?

Read This Next
Meet Garlic
Chinese Firm Wants to Give Cloned Pets the Original's "Memories"
Futurism
Experts Answer: Should You Be Allowed to Create Your Own Clone?
Futurism
Using DNA, New Software Can Verify Identity In Minutes
Futurism
Scientists Just Sequenced An 18 Million Year Old Species That Cloned Itself
Futurism
How Close Are We to Successfully Cloning the First Human?
More on Hard Science
Warped Tour
Yesterday on futurism
Professor Believes Door to Warp Drive May Lie With Ethylene Glycol
Sky Bursts
Yesterday on the byte
Astronomers Intrigued by 25 Mysterious Repeating Radio Signals From Deep Space
Tractor Beam
Jan 26 on the byte
Scientists Build Working Tractor Beam, Although It's Comically Tiny
READ MORE STORIES ABOUT / Hard Science
Keep up.
Subscribe to our daily newsletter to keep in touch with the subjects shaping our future.
+Social+Newsletter
TopicsAbout UsContact Us
Copyright ©, Camden Media Inc All Rights Reserved. See our User Agreement, Privacy Policy and Data Use Policy. The material on this site may not be reproduced, distributed, transmitted, cached or otherwise used, except with prior written permission of Futurism. Articles may contain affiliate links which enable us to share in the revenue of any purchases made.
Fonts by Typekit and Monotype.