Exoskeletons are About to Walk Ford's Factory Floors

Jobs haven't all gone to the robots, yet. 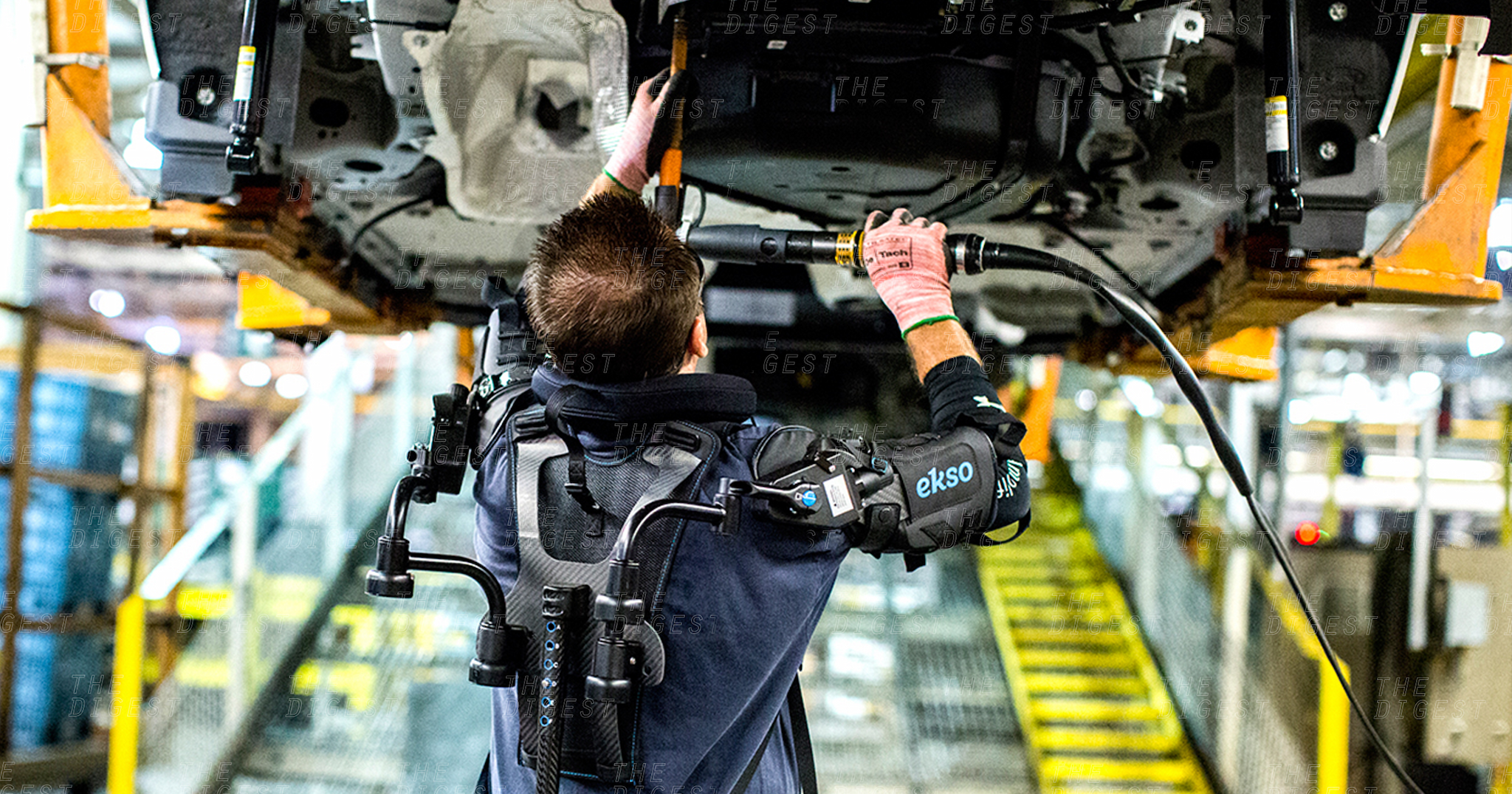 HALF MAN, HALF MACHINE. Full-blown automation may be the future of manufacturing, but we're not there yet. While some machines have taken over the more painstaking tasks on the factory floor, humans still play a vital role in the production line. But often, it isn't easy work. Tasks typically require being on one's feet, and some even involve making repetitive arm motions up to 4,600 times a day or one million times a year. Ouch.

At Ford though, this might all be changing. Exoskeleton use on Ford's factory floors could soon shift into overdrive, according to Engadget.

ENTER THE EXOSKELETONS. In November 2017, EksoVest Exoskeletons, built by Ekso Bionics, were given to workers in two Ford factories. Now ,up to 75 exoskeletons will be distributed to employees at 15 factories across the world. The exoskeletons don't have motors, or even batteries, but provide "passive assistance" in the form of arm support from five to 15 pounds. By giving more arm support the higher a person reaches, the device takes strain off of the arm muscles. If you're not convinced it would make a difference, hold your hand above your head for a few minutes.

WE HAVE THE TECHNOLOGY. This is only the beginning for exoskeletons at Ford. "Today, it's only the passive upper-arm support skeleton that helps with overhead work," Marty Smets, Ford's technical expert of human systems and virtual manufacturing, told Engadget.

Taking one step at a time could lead Ford to other avenues of exoskeleton use within its factories. By establishing systems for the use now, Ford is well positioned to adapt new devices as they become available. "We wanted to focus on one exoskeleton initially, then expand from there as the space grows," Smet said.

Time will tell, but perhaps man and machine can co-exist peacefully after all.

Read This Next
Hand That Feeds
A Wearable Robot Arm Makes You Work for Thanksgiving Leftovers
Futurism
Pacific Rim's Robots Are Less Advanced Than Some of Today's Real Robots
Futurism
Electronic Skin That Heals Could be the Future of Prosthetics, Robotics
Futurism
Georgia Tech's New Prosthetic Arm Enables Amputees to Control Each Individual Finger
Futurism
Ford Pilots a New Exoskeleton to Lessen Worker Fatigue
More on Enhanced Humans
Skull Candy
Oct 24 on the byte
A Guy Lost His Eye and Put a Bright Light Into the Socket
So Sue Me
Sep 28 on futurism
Battle Erupts Over Alleged Grisly Photos of Brain-Hacked Neuralink Monkeys
Synchron Eyes
Aug 23 on the byte
Frustrated With Neuralink's Slow Progress, Elon Musk Approaches Competitor
READ MORE STORIES ABOUT / Enhanced Humans
Keep up.
Subscribe to our daily newsletter to keep in touch with the subjects shaping our future.
+Social+Newsletter
TopicsAbout UsContact Us
Copyright ©, Camden Media Inc All Rights Reserved. See our User Agreement, Privacy Policy and Data Use Policy. The material on this site may not be reproduced, distributed, transmitted, cached or otherwise used, except with prior written permission of Futurism. Articles may contain affiliate links which enable us to share in the revenue of any purchases made.
Fonts by Typekit and Monotype.