"The first time I used it, it was like my muscles were totally fused with this exoskeleton." 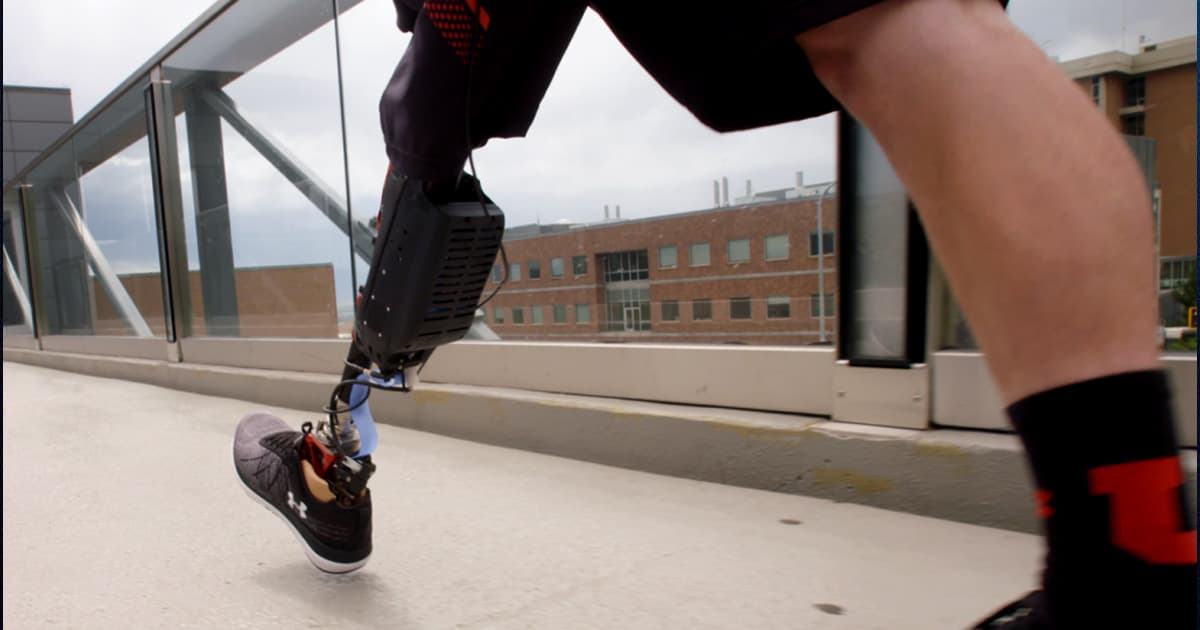 Image by University of Utah
Robotics/Prosthetics

A new exoskeleton can give people with leg amputations the ability to walk upright, thanks to a system that extends their residual limb into a full robotic leg.

The system includes sensors and processors that analyze the wearer's movements in order to make walking as simple as possible, according to research published in the journal Nature Medicine on Monday. The exoskeleton gives just enough of a boost to make walking feel natural and so that the wearer doesn't need to spend so much energy just to take a step with a leg that may have had several muscles removed. In a press release, University of Utah engineer and lead developer Tommaso Lenzi compares it to using an electric bike to travel uphill.

The exoskeleton straps around the waist for stability, and onboard processors control the motorized leg components in order to maintain a steady gait. That way, the robotic leg can actually help the wearer walk rather than merely providing passive balance support.

The Utah researchers have only tested the exoskeleton on six people so far, so there's still a long way to go before a device could be available to the general public. But one of those volunteers, a man named Stan Schaar, added that the device was the closest thing to walking on his biological legs that he'd experienced since his amputation.

"It just felt like a big wind was behind me, pushing me down the road," Schaar said in the press release.

"The first time I used it, it was like my muscles were totally fused with this exoskeleton, and it was helping them move faster," Schaar added. "It helped my leg to relax and just move forward and walk. I could probably walk for miles with this thing on because it was helping my muscles move."

2.07.23 Genetics
Scientist Who Gene Edited Human Babies Says Mistakes Were Made
2.05.23 Robotics/Prosthetics
Scientists Working on Third Arm You Control Using Your Brain
1.26.23 Developments
Eccentric Wealthy Guy Spends $2 Million Per Year Staving Off Aging
1.21.23 Neuroscience/Brain Science
Bad News: the Horrific Zombie Fungus in "The Last of Us" Is Real
1.11.23 Neuroscience/Brain Science
People Thought an AI Was Brilliantly Analyzing Their Personalities, But It Was Actually Giving Out Feedback Randomly

2.07.23 Developments
Elon Musk Responds to Health Concerns
"Wouldn’t wish that pain on anyone."
By Victor Tangermann / Read More >>
2.06.23
Scientist Suggests Tweaks for Genetically Altered Supersoldiers
Is this a sneak peek?
By Noor Al-Sibai / Read More >>
2.05.23 Neuroscience/Brain Science
Blobs of Human Brain Implanted in Rat Brains Replace Damaged Vision Functionality
"I see this as the first step in developing a new strategy for repairing the brain."
By Victor Tangermann / Read More >>
Keep up.
Subscribe to our daily newsletter to keep in touch with the subjects shaping our future.
+Social+Newsletter
TopicsAbout UsContact Us
Copyright ©, Camden Media Inc All Rights Reserved. See our User Agreement, Privacy Policy and Data Use Policy. The material on this site may not be reproduced, distributed, transmitted, cached or otherwise used, except with prior written permission of Futurism. Articles may contain affiliate links which enable us to share in the revenue of any purchases made.
Fonts by Typekit and Monotype.