Okay, these memes are pretty good. 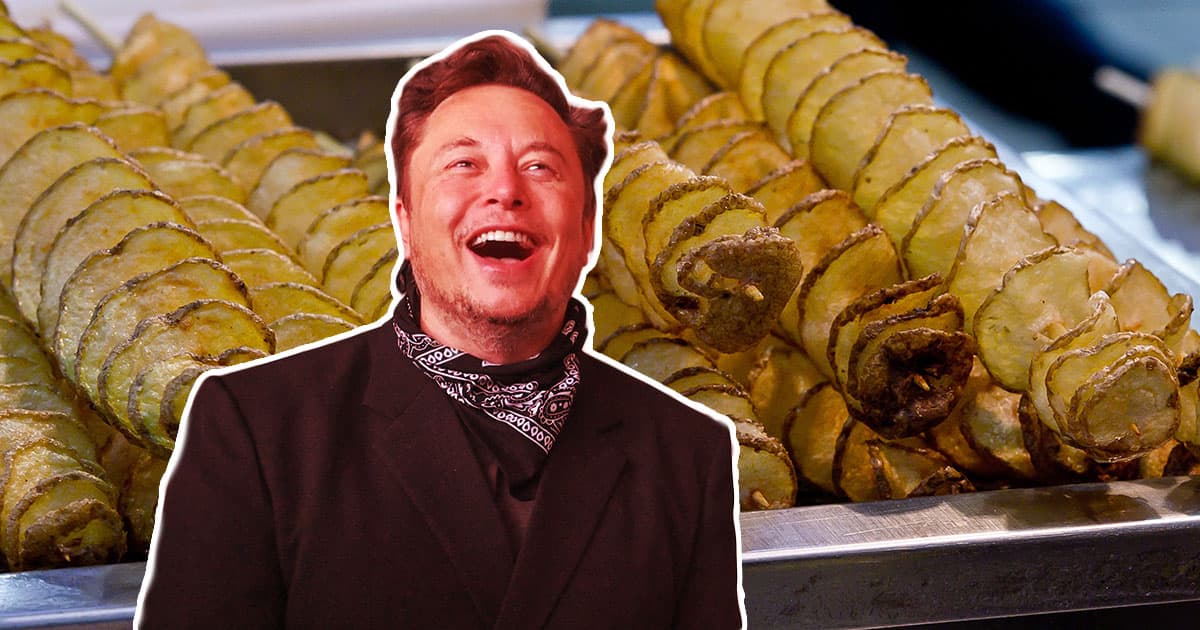 Elon Musk walks into a sombrero festival... and the memes write themselves.

As KEVO-TV reports, the Tesla and SpaceX CEO was spotted at the Charro Days festival in Brownsville, TX — the city nearby where SpaceX's Starbase HQ is located — over the weekend when someone handed him a spiropapa, or a delicious fried potato spiral on a stick.

Photographed multiple times with his and Grimes' toddler X Æ A-12, affectionately known as "Baby X," Musk was also documented taking a giant bite of the starchy treat and pretty much instantly became even more of a meme.

WHY IS ELON MUSK AT CHARRO DAYS AND WHY IS HE EATING A SPIROPAPA LIKE THAT 😭😭😭😭 pic.twitter.com/8mzmQ0qD7N

This guy simply couldn't get enough of that fried potato spiral. And really, who can blame him?

Naturally, there's already been countless permutations of the photo edited into various meme formats. Here are some of our favs.

This post jokes that the xenomorph from the "Alien" franchise is Musk's "final form." And it honestly? It just might track.

"Two shitposts for the price of one," commented another user, along with a brilliant photoshop inserting the spiropapa into SpaceX's "Mechazilla" Starship catching tower.

We did it, Joe

Perhaps referencing the other big Musk news of the weekend — that he's deploying his SpaceX-powered Starlink satellite internet service to Ukraine amid the Russian invasion — this incredible post is just galaxy-brained enough to work.

Read This Next
Shot Well
Head of NASA Relieved to Hear Elon Musk Isn't REALLY Running SpaceX
Monkey Business
China Plans to Send Monkeys to Space Station to Have Sex With Each Other
Overview Effect
William Shatner Says His Space Trip Left Him With a Feeling of Terrible Grief
Makeover Scene
Space Tourist Says He's Thinking About Flying SpaceX Craft Up to Fix Hubble
Grain of Salt
There's a Huge Problem With Elon Musk's Promise to Bring Starlink to Iran
More on Off World
Take Cover
Yesterday on the byte
Space Startup Blows Up Another Giant Inflatable Space Station Module
Rock Blast
Yesterday on the byte
Scientists Say There's an Upside to Those Rocks That Keep Bludgeoning the James Webb
Meathead Theory
Yesterday on the byte
Professor Receives Insane Email Claiming "Biological" Green Comet Is Giving Off "Meat Smoke"
READ MORE STORIES ABOUT / Off World
Keep up.
Subscribe to our daily newsletter to keep in touch with the subjects shaping our future.
+Social+Newsletter
TopicsAbout UsContact Us
Copyright ©, Camden Media Inc All Rights Reserved. See our User Agreement, Privacy Policy and Data Use Policy. The material on this site may not be reproduced, distributed, transmitted, cached or otherwise used, except with prior written permission of Futurism. Articles may contain affiliate links which enable us to share in the revenue of any purchases made.
Fonts by Typekit and Monotype.