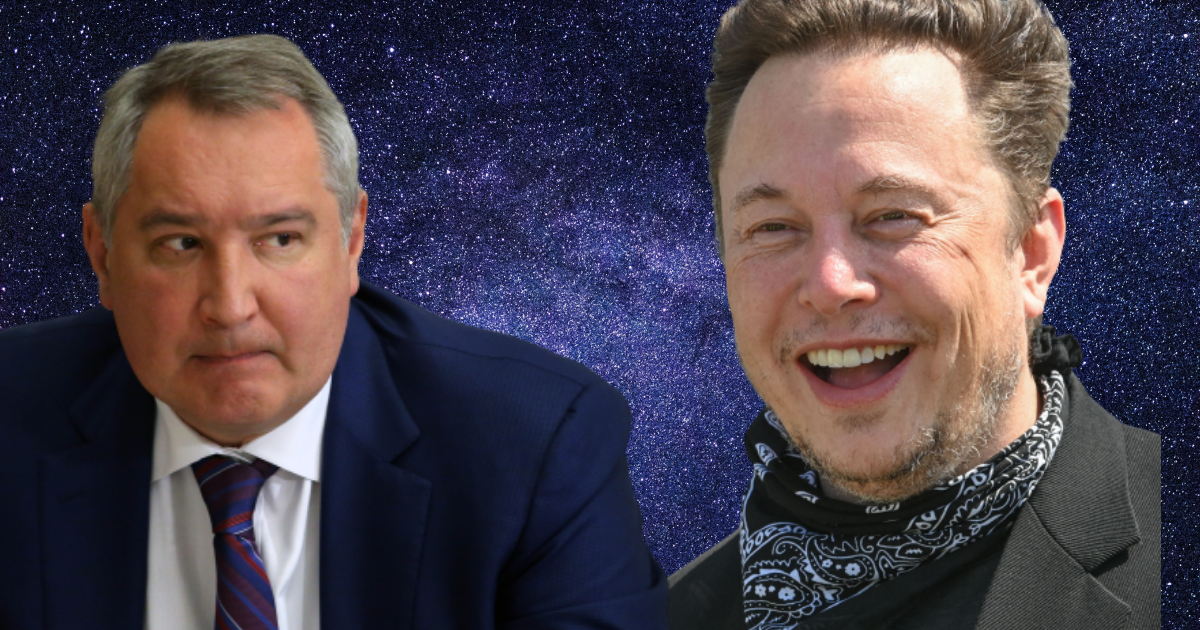 Russian space agency chief Dmitry Rogozin seemed to threaten the United States and Europe with an International Space Station collision following US sanctions over the country invading Ukraine and killing hundreds. Rogozin took to Twitter where he ranted on Thursday that sanctions interfering with Russian work on the ISS could cause the 500-ton station to crash.

"Who will save the ISS from an uncontrolled deorbit and fall into the United States or Europe?" Rogozin asked in a long Twitter thread translated into English by Google.

One would-be hero responded to Rogozin quickly — Elon Musk. The billionaire CEO of Tesla and SpaceX had a simple response for the Roscosmos head and tweeted his own company's logo, pictured below.

A confused Twitter user wanted additional clarification, as if they couldn't quite believe what Musk was suggesting.

"'I think Elon is referring to this above... So Elon answered: SpaceX," the user commented on the same thread.

“If you block cooperation with us, who will save the ISS from an uncontrolled deorbit and fall into the United States & Europe”

I think Elon is referring to this above (translation provided by Twitter).

Musk's response, pictured below, was a simple "Yes."

There's no doubt the world needs a little morale boost right now, as evidenced by Twitter's other trending hero who may or may not exist — the Ghost of Kyiv, who many credit with single-handedly protecting Ukrainian airspace. But Musk has made promises before, like that time he said he'd rescue trapped youth in a Thai cave and failed spectacularly. So it's a little hard to take him seriously now.

However, Musk did respond to another promising Twitter thread explaining how SpaceX could dock with the ISS in the absence of the Russian Segment. Pete Harding, the International Space Station Editor for NASASpaceFlight.com, tweeted renders, pictured below, of SpaceX's Dragon spacecraft docked to the ISS to provide stability and control.

"A Dragon could be docked to provide reboost capability," Harding said online Thursday.

Here is what the ISS would look like without the Russian Segment attached - in it's place, a Dragon could be docked to provide reboost capability and attitude control. pic.twitter.com/2Zvrotv2Zw

According to SpaceX's website, the Dragon spacecraft is capable of carrying up to seven passengers to and from Earth's orbit, and Musk himself responded to Harding's tweets by saying, "Good thread."

It's pretty obvious we hope that the controlled destruction and retirement of the ISS goes off without a hitch, and that Musk's gallant efforts won't be required.

It's still comforting to know, though, that somewhere, a Dragon spacecraft may be getting ready to keep the ISS from flattening the US if push comes to shove.

More on Musk's good deeds: There's a Reason NASA Doesn't Have to Submit to Russia: SpaceX

Read This Next
Shot Well
Head of NASA Relieved to Hear Elon Musk Isn't REALLY Running SpaceX
Makeover Scene
Space Tourist Says He's Thinking About Flying SpaceX Craft Up to Fix Hubble
Grain of Salt
There's a Huge Problem With Elon Musk's Promise to Bring Starlink to Iran
Sluggo Mode
SpaceX Has a Major Problem With Its Starlink Internet Connections
Sabers Rattled
Russia Issues Veiled Threat to Shoot Down Pesky SpaceX Satellites
More on Off World
Grrrrrrrr
4:06 PM on the byte
Internet Erupts as NASA Spots Cartoon Bear on Surface of Mars
Gl1tc4
2:44 PM on the byte
NASA Says Another James Webb Instrument Has Suffered a Glitch
comet Spotting
2:06 PM on the byte
Behold! Dazzling Green Comet Approaches
READ MORE STORIES ABOUT / Off World
Keep up.
Subscribe to our daily newsletter to keep in touch with the subjects shaping our future.
+Social+Newsletter
TopicsAbout UsContact Us
Copyright ©, Camden Media Inc All Rights Reserved. See our User Agreement, Privacy Policy and Data Use Policy. The material on this site may not be reproduced, distributed, transmitted, cached or otherwise used, except with prior written permission of Futurism. Articles may contain affiliate links which enable us to share in the revenue of any purchases made.
Fonts by Typekit and Monotype.