Elon Musk Warns That Humankind Will "End Up in Adult Diapers"

"The environment is going to be fine even if we doubled the size of the humans." 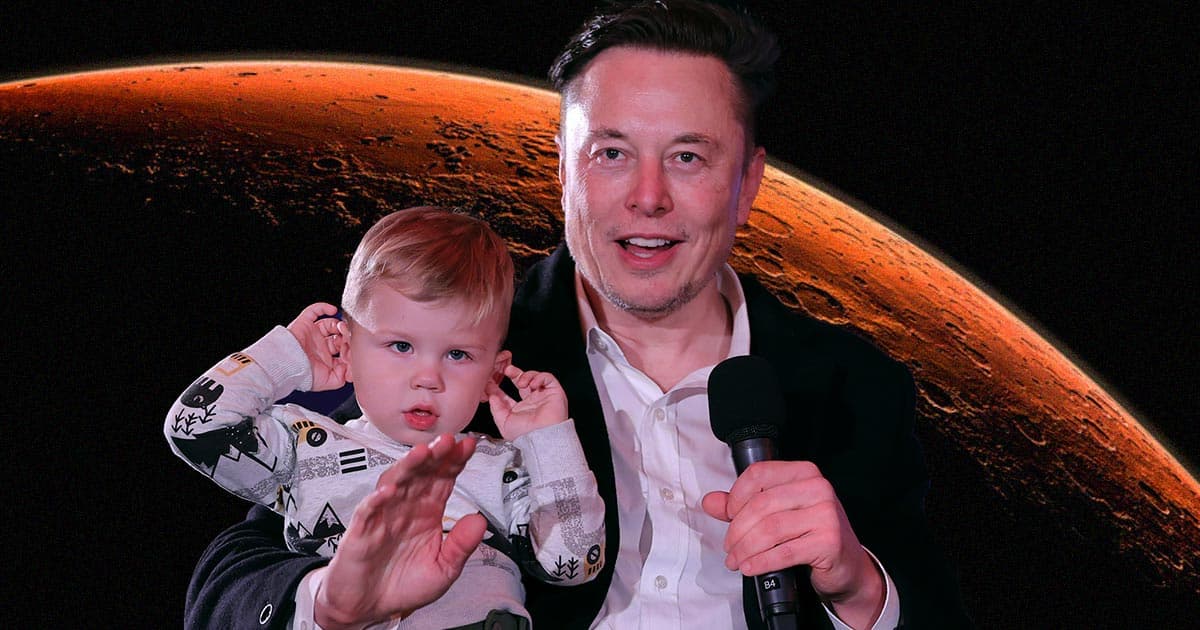 Tesla CEO Elon Musk has rehashed one of his favorite talking points yet again, warning of the dangers of having fewer children, something that he says could lead to the collapse of human civilization.

"At least maintain our numbers," he said during a conference in Miami earlier this week, as quoted by Insider. "We don't necessarily need to grow dramatically, but least let's not gradually dwindle away until civilization ends with all of us in adult diapers, in a whimper."

He also opined that "having fewer kids is better for the environment" is "total nonsense."

In other words, the kids will be alright, so have more of them before we run out.

Musk provided no evidence to back up his rather controversial claims. But, in his defense, there may be at least some credibility to his predictions.

On one hand, research has shown that fewer people could drastically cut carbon emissions. According to a 2017 study, having just one fewer child had the greatest effect, compared to other lifestyle changes, to reduce annual personal emissions, cutting on average 58 tons of CO2 emissions. Ditching the car came in second, cutting 2.4 annual tons of CO2.

On the other hand, though, experts have found that living a climate-friendly lifestyle could actually outweigh the effects of having more children. Besides, carbon emissions range massively depending on where the person lives or how much they travel internationally, complicating the picture significantly.

And it is true that most researchers now agree that Earth is headed for an astonishing population decline, which could have several knock on effects. Some argue that with fewer babies being born, the carbon footprint offsets may actually be a moot point, considering we'll be dealing with a rapidly aging population.

In short, human-driven climate change is rapidly deteriorating the environment, and without drastic changes to our behavior, our carbon footprint will likely only rise in the short term if the global population keeps growing.

But with several countries, notably Japan and China, entering periods of natural population decline, those effects become harder to grasp.

Will humanity truly end "in a whimper," as Musk has repeatedly warned, if we have fewer kids? It's might be a scenario we won't even get to see play out — if we don't take drastic action to ensure that a rapidly warming planet doesn't put an end to us first.

READ MORE: Elon Musk says we can't let humankind end in 'adult diapers' and that the environment would be fine if we doubled our population [Insider]

More on population collapse: China's Population Projected to Fall by Half Within 30 Years

Read This Next
Sun Shield
Scientists Increasingly Calling to Dim the Sun
Fusion Futility
Elon Musk Slams Fusion, Says Future of Energy Is Wind and Solar
Coastal Chaos
The Doomsday Glacier Is Hanging on "By Its Fingernails," Scientists Say
Remember Donald?
Donald Trump Goes on Bizarre Rant Against Electric Cars
Dry Dock
The Top 13 Wildest Objects That Terrible Droughts Have Revealed
More on Earth & Energy
Reptilian Revenge
8:50 PM on the byte
Saboteur Iguana Causes Mass Power Outage, Then Dies
Drawing the Line
8:00 PM on the byte
Satellite Images Show Progress on 100-Mile Long Skyscraper in Saudi Arabia
Shark Week
3:21 PM on the byte
Scientists Stumble Upon Huge Graveyard of Sharks, Deep Under Ocean
READ MORE STORIES ABOUT / Earth & Energy
Keep up.
Subscribe to our daily newsletter to keep in touch with the subjects shaping our future.
+Social+Newsletter
TopicsAbout UsContact Us
Copyright ©, Camden Media Inc All Rights Reserved. See our User Agreement, Privacy Policy and Data Use Policy. The material on this site may not be reproduced, distributed, transmitted, cached or otherwise used, except with prior written permission of Futurism. Articles may contain affiliate links which enable us to share in the revenue of any purchases made.
Fonts by Typekit and Monotype.