"I don’t mean to suggest chaos, but rather that you’re not under anyone’s thumb." 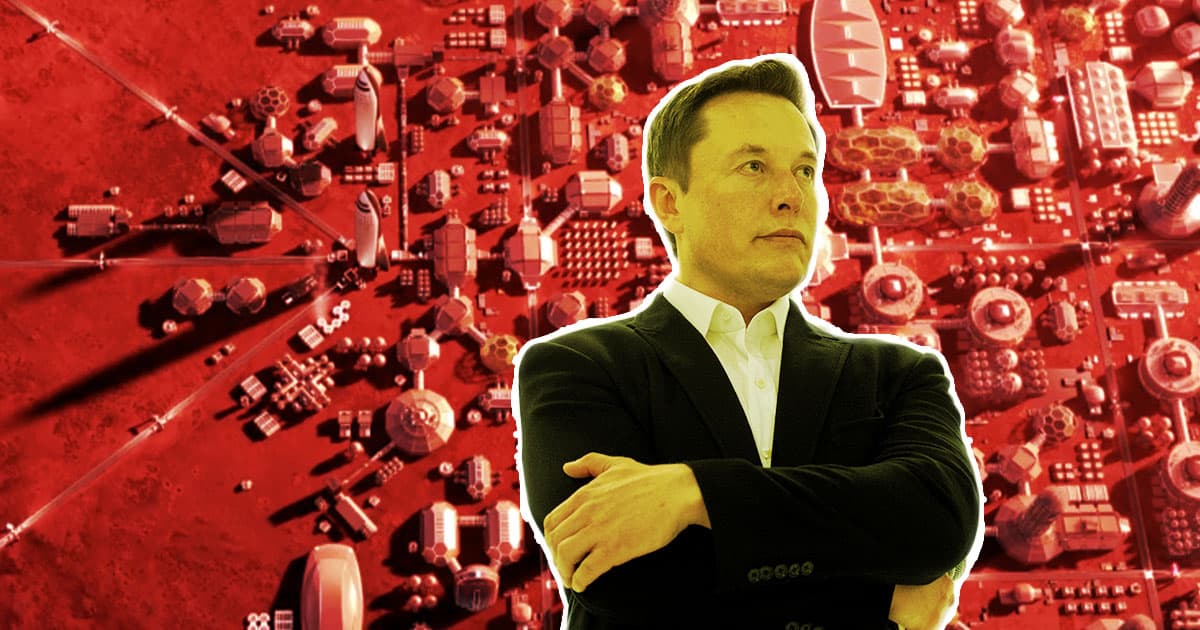 Tesla CEO Elon Musk isn't one to follow rules, particularly when he thinks they're bogus.

The billionaire likes to envision a world, or perhaps a much smaller society on Mars, in which everybody can do as they please without a greater hierarchy of power.

"If there’s a utopia where people have access to any goods or services that they want, there’s plenty for everyone," Musk told Time magazine after being named the Person of the Year today. "If we have a highly automated future with the robots that can do anything, then any work you do will be because you want to do it, not because you have to do it."

In sum, Musk — remember, this is the world's wealthiest person talking — characterized himself to Time as a "utopian anarchist."

But such a society wouldn't be completely void of rules, either.

"I don’t mean to suggest chaos, but rather that you’re not under anyone’s thumb," Musk argued in the interview.

It's obviously a vision set on utopian ideals, but does it even make sense?

We've already seen that the process of transitioning into a more automated society can easily result in the consolidation of power — which is more often than not a result of corporations building on the backs of workers.

It sounds a bit like Musk is trying to have his cake and eat it, too. When it comes to government involvement, his political leanings tend to sway pretty libertarian. He has often butted heads with regulators and politicians when trying to get his many businesses off the ground and moving forward.

Fewer rules and lower barriers of entry can allow innovation to flourish, Musk has often suggested. And that will be as important as ever if humanity wants to stand a chance to go interplanetary — Musk's well-documented biggest wish for the future of our species.

But will everybody be happy to do as they wish within a highly technologically advanced anarcho-society? Having the machines take over the dirty work will arguably lead to some pretty big changes to the fundamental structures of society — which will undoubtedly put any civilization to the test.

Musk's vision is arguably a bit of a stretch. Having everybody fend for themselves, while also remaining content with the riches they're being afforded, is certainly a utopian dream.

READ MORE: Elon Musk on Income Inequality, Cryptocurrency and His Tweets: Excerpts From the 2021 Person of the Year Interview [TIME]

More on Elon: Elon Musk Is Time Magazine’s Person of the Year 2021

Read This Next
Sleepless in San Francisco
Elon Musk Reportedly Building "Sad Hotel Rooms" at Twitter HQ for Exhausted Employees
But His Emails!
Twitter Cofounder Says Elon Musk Is "Not a Serious Person"
D*** Pic Freedom
Elon Musk Thinks It’s Likely that “Something Bad” Will Happen to Him
Abso-Effing-Lutely
Free Speech Absolutist Elon Musk Discovers That Some Speech Is Unacceptable After All
Be Better
Elon Musk Reportedly Slashed the Team That Fights Child Sexual Abuse on Twitter
More on Future Society
Phoney Business
Yesterday on the byte
Amazon Says It'll Pay You $2 Per Month to Spy on Your Phone's Internet Traffic
Elon Tusk
Yesterday on the byte
Rick and Morty Fans Now Embarrassed by Elon Musk's "Cringe" Cameo
Dirty Bird
Yesterday on the byte
Twitter HQ May Sink Into Literal Filth as Its Janitors Go on Strike
READ MORE STORIES ABOUT / Future Society
Keep up.
Subscribe to our daily newsletter to keep in touch with the subjects shaping our future.
+Social+Newsletter
TopicsAbout UsContact Us
Copyright ©, Camden Media Inc All Rights Reserved. See our User Agreement, Privacy Policy and Data Use Policy. The material on this site may not be reproduced, distributed, transmitted, cached or otherwise used, except with prior written permission of Futurism. Articles may contain affiliate links which enable us to share in the revenue of any purchases made.
Fonts by Typekit and Monotype.