"For those wondering, I will pay over $11 billion in taxes this year." 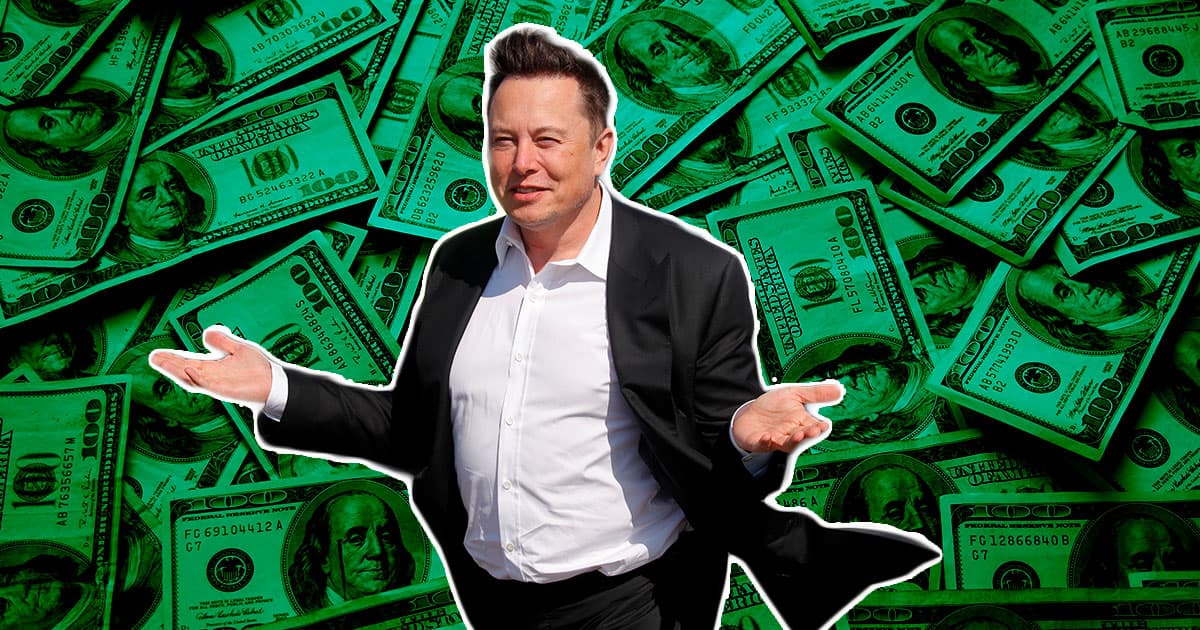 Tesla CEO Elon Musk is finally paying his taxes this year — and he wants to be celebrated for his generosity!

"For those wondering, I will pay over $11 billion in taxes this year," Musk tweeted late Sunday night, in an apparent bid for a pat on the back for doing something most other Americans do every year.

That amount may sound like a lot, but it still represents a tiny fraction of Musk's substantial net worth. In fact, Musk has made almost $13 billion this fall just by selling Tesla stock.

Critics say that Musk paying his fair share in taxes should be expected, not applauded, especially considering the amount of money his businesses have received from taxpayers over the years.

The news comes after Musk and senator Elizabeth Warren (D-MA) had an exchange on Twitter that got ugly. Last week, Warren accused Musk of abusing a "rigged tax code" and "freeloading off everyone else."

Unsurprisingly, Musk didn't take kindly to the accusations, despite the fact that Musk has more or less been doing just that for years.

"And if you opened your eyes for 2 seconds, you would realize I will pay more taxes than any American in history this year," Musk whined in response. "Don’t spend it all at once... oh wait you did already," he added.

Investors weren't impressed with the spat. Musk was even hit with a lawsuit over the weekend, arguing that his reckless tweets violated a 2019 agreement with securities regulators.

Musk has clearly struggled coming to terms with the fact that Americans have to pay taxes every year. He has repeatedly voiced his discontent with the mere concept of taxation. In his eyes, governments are terrible at spending money while businesses have a much better idea of where to allocate funds.

"Who is best at capital allocation — government or entrepreneurs — is indeed what it comes down to," he argued in a tweet last month.

Now, though, Musk may be realizing that perhaps it's better to pay his bill after all — or at least, the Twitter poll he launched last month may have given him the idea.

Besides, $11 billion is still chump change for the richest man in the world.

READ MORE: Elon Musk Says He Will Pay More Than $11 Billion in Taxes This Year [The Wall Street Journal]

More on the saga: TESLA SUED OVER ELON MUSK’S FEUD WITH ELIZABETH WARREN

Read This Next
I Silence Thee
Leaked Messages Seem to Show Elon Musk Using Twitter to Punish His Enemies
Enemy Mine
Elon Musk Now Denies That His Family's Emerald Mine Existed, In Spite of Previously Bragging About It
Bot Rush
An Overwhelming Number of Porn Bot Accounts "Drowned Out" Chinese Protest Content on Twitter
Hardcore Mode
Even Twitter's Intern Just Resigned in Disappointment
This is Exhausting
Elon Musk Seems to Be Trying to Weasel Out of Vote to Resign
More on Future Society
Gas Giant
Yesterday on the byte
Journalist Eats Lab-Grown Chicken, Gets "Weirdly Gassy"
Musk Rats
Thursday on the byte
Twitter Is Quietly Re-Suspending the Lunatics Elon Musk Let Back On
Going Wireless
Wednesday on futurism
Hackers Took Over a Subdomain of Wired.com for Several Months and Replaced It With Sleazy Online Casino Content
READ MORE STORIES ABOUT / Future Society
Keep up.
Subscribe to our daily newsletter to keep in touch with the subjects shaping our future.
+Social+Newsletter
TopicsAbout UsContact Us
Copyright ©, Camden Media Inc All Rights Reserved. See our User Agreement, Privacy Policy and Data Use Policy. The material on this site may not be reproduced, distributed, transmitted, cached or otherwise used, except with prior written permission of Futurism. Articles may contain affiliate links which enable us to share in the revenue of any purchases made.
Fonts by Typekit and Monotype.