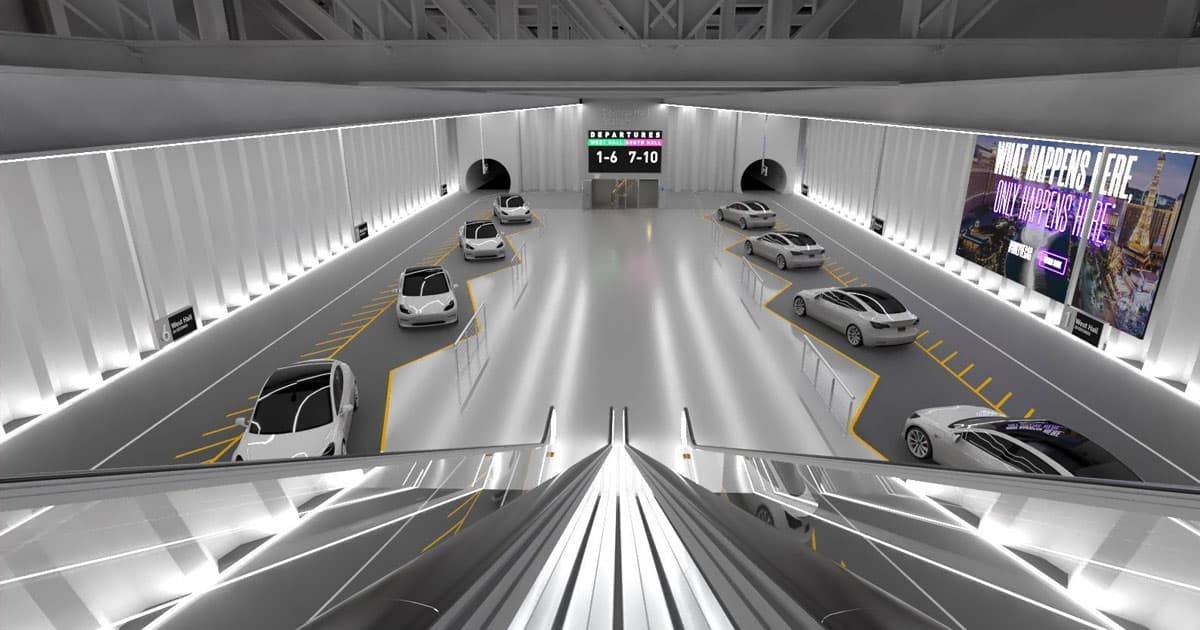 Is Elon Musk taking us for a ride?

Early this morning, the Boring Company and Tesla CEO shared a brand new render of his tunnel company's latest project, an underground loop that transports visitors at the Las Vegas Convention Center.

The Boring Company officially kicked off the project in November, becoming the company's first major project meant for public use. But as we've seen with the company's first test tunnel near its headquarters in Hawthorne, California, the vision isn't exactly optimized to get the most people from point A to point B.

Original renders of the Boring Company's vision dating back to 2018 showed passenger pods on "skates" that could fit eight to 16 passengers zooming through underground tunnels at a brisk pace.

It looked amazing. But Musk seems to have ditched that idea, switching to the use of "fully road legal autonomous transport cars" and "ground to tunnel car elevators" — lightly modified Tesla vehicles driving underground at slightly faster than highway speeds, as a December 2018 test ride at the company's test tunnel demonstrated.

The CEO's newest render shows off that same vision — the Las Vegas Loop will also rely on modified Tesla vehicles, likely with the same "tracking wheels" used during the 2018 test ride, as part of an underground Uber-like system.

And no, this likely won't turn into a mass-transit system in the future either. When asked about the "12-seater van" originally shown off by the company in 2018, Musk argued that it's "best to have people seated for safety & speed of travel."

When challenged by Tim Dodd, better known as Everyday Astronaut, who argued that "just 5-7 max is underwhelming and limiting" in a tweet response, Musk countered that "'individualized mass transit is the future."

The Las Vegas Loop isn't a one-off event to impress the media. It's meant to serve the public by shuttling them from the Convention Center's massive New Exhibit Hall to the rest of the campus, drastically cutting down on a 15 minute walk.

The Las Vegas Convention and Visitors Authority (LVCVA) claims the system will be able to carry 4,400 passengers an hour at 250 kilometers per hour (155 mph) inside two tunnels.

But getting people into and out of individual Tesla vehicles one by one will likely take a lot longer than having double doors slide open, letting in a drastically higher number of people in in one go, as is the case for virtually any other form of mass transit.

With enough interest, in other words, waiting to get a ride through the new tunnels could end up taking a whole lot longer than a 15 minute walk.

In fact, the Tesla vehicles won't even be able to drive themselves — a great source of pride for Musk's electric car company.

"Human overseen at first, then fully self-driving," admitted Musk in a tweet, suggesting that perhaps Tesla's Autopilot feature may eventually be modified to allow the vehicles to drive themselves through the tunnel.

All told, it's a significant departure from the Boring Company's 2018 vision. This is not mass transit as we know it.

More than two million people visit the LA Convention Center a year (though the pandemic is currently causing a massive downtown) — stuffing visitors into individual five-to-seven-seater cars underground likely won't end up becoming a meaningful way to get around.

To their credit, that point doesn't seem lost on those in charge.

"I think it provides a great experience for our customers and has the opportunity (to be) an attraction in and of itself," Steve Hill, CEO of the Las Vegas Convention and Visitors Authority, said in a March 2019 statement.

Read This Next
Stay Away
Tesla Is Having Extreme Trouble Hiring, for Some Reason
It Was the Tesla
Manslaughter Case Has a Strange Twist: Tesla That Killed Couple Was on Autopilot
Full Self-Delusion
Survey: 42% of Tesla Autopilot Drivers Think Their Cars Can Entirely Drive Themselves
Musk Antics
Elon Musk Has a Big Problem on His Hands
Please Elon
Why These Tesla Owners Are Going on a Hunger Strike Against Tesla
More on Advanced Transport
Apple Car News
Yesterday on the byte
Apple Gives Up on Making Its Upcoming Car Fully Autonomous
Pepsi Semi
Dec 2 on the byte
Tesla Semi Truck Drives 500 Miles Fully Loaded
Out With a Bang
Nov 29 on the byte
Driver Says His Ford F-150 Lightning Made a "Loud Boom" and Died When He Plugged It In
READ MORE STORIES ABOUT / Advanced Transport
Keep up.
Subscribe to our daily newsletter to keep in touch with the subjects shaping our future.
+Social+Newsletter
TopicsAbout UsContact Us
Copyright ©, Camden Media Inc All Rights Reserved. See our User Agreement, Privacy Policy and Data Use Policy. The material on this site may not be reproduced, distributed, transmitted, cached or otherwise used, except with prior written permission of Futurism. Articles may contain affiliate links which enable us to share in the revenue of any purchases made.
Fonts by Typekit and Monotype.