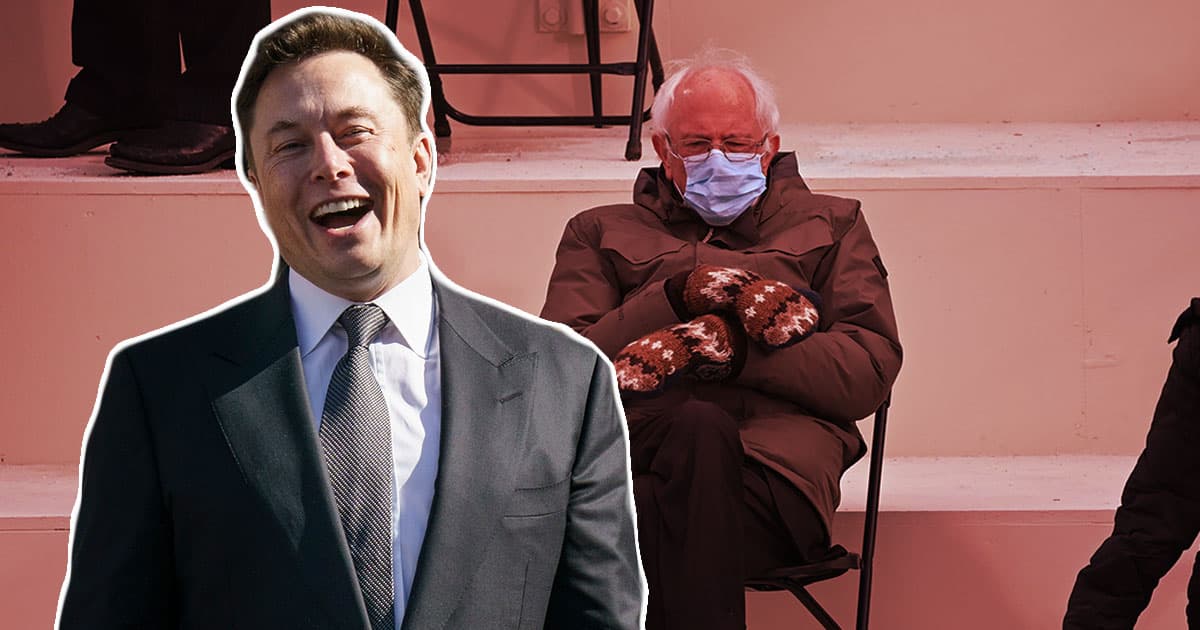 The impossible might have happened: Elon Musk might have actually gone too far for some of his fans.

The drama started when Musk responded to a tweet by Senator Bernie Sanders on Sunday morning that read: "We must demand that the extremely wealthy pay their fair share. Period."

To which Musk responded with a rather mean choice of words: "I keep forgetting that you’re still alive."

It’s undoubtedly a bad look for the richest man on Earth to pooh-pooh the outrageous idea that he pays his fair share of taxes, while simultaneously making fun of an elderly man who clearly just wants the best for the world.

In classic Musk fashion, though, he continued to dig his own grave in follow-up tweets saying that Sanders "is a taker, not a maker" and doubling down on his perplexing tax-avoidance scheme by selling his stock at the behest of a Twitter poll.

While there are those who defended the SpaceX founder, the tweet seems to have much of his fandom at odds with one another. At the time of reporting, the top post on the /r/ElonMusk subreddit is a screengrab of the exchange titled "this is a dick move, change my mind."

"It’s mean and nasty," one user commented. "This sub [is] becoming an echo chamber though, so lots of users will rationalize away and protect their idol."

"Yeah that’s a pretty shitty thing to say," another user wrote. "I know Elon likes to play around on Twitter a lot and usually it’s kind of funny to see a Billionaire shit posting, but that’s pretty uncalled for and fucked up."

Many took umbrage with the fact that Musk mocking Sanders' age, with one user writing that making "fun of an 80 year old for not being dead is extremely shitty. None of you should be cool with this."

Of course, Twitter and Reddit users also used this as an opportunity to dunk on Musk, with plenty of reminders of his former baldness and as well as dusting off the old "apartheid emerald mines" barbs.

It’s been a controversial few weeks on Twitter for the billionaire, who was no stranger to controversial tweets in the first place. Late last month, Musk found himself in hot water for a series of sexist tweets that he later deleted about a new university with a vulgar name.

While that was bad, it seems like he’s outdone himself this time by attacking the Internet’s favorite democratic socialist.

Read This Next
I Silence Thee
Leaked Messages Seem to Show Elon Musk Using Twitter to Punish His Enemies
Enemy Mine
Elon Musk Now Denies That His Family's Emerald Mine Existed, In Spite of Previously Bragging About It
Bot Rush
An Overwhelming Number of Porn Bot Accounts "Drowned Out" Chinese Protest Content on Twitter
Hardcore Mode
Even Twitter's Intern Just Resigned in Disappointment
This is Exhausting
Elon Musk Seems to Be Trying to Weasel Out of Vote to Resign
More on Future Society
Primate Theft
Yesterday on the byte
It Was a Very Bad Weekend for Monkeys Being Stolen From Zoos, Apparently
Ring The Alarm
Yesterday on the byte
Whistleblower Claims Facebook Can Secretly Drain Your Phone's Battery on Purpose
Gas Giant
Jan 27 on the byte
Journalist Eats Lab-Grown Chicken, Gets "Weirdly Gassy"
READ MORE STORIES ABOUT / Future Society
Keep up.
Subscribe to our daily newsletter to keep in touch with the subjects shaping our future.
+Social+Newsletter
TopicsAbout UsContact Us
Copyright ©, Camden Media Inc All Rights Reserved. See our User Agreement, Privacy Policy and Data Use Policy. The material on this site may not be reproduced, distributed, transmitted, cached or otherwise used, except with prior written permission of Futurism. Articles may contain affiliate links which enable us to share in the revenue of any purchases made.
Fonts by Typekit and Monotype.