Turns Out Elon Musk Still Lives in a Giant Mansion, Not That Little Prefab Box 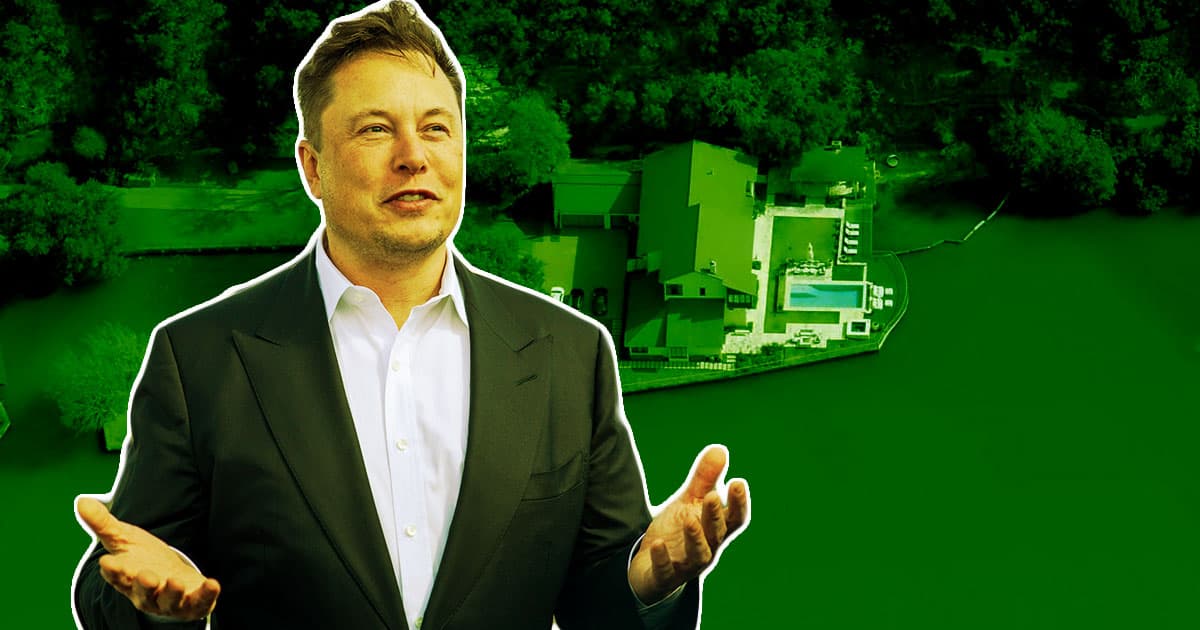 Remember when Elon Musk said he was gonna sell all his property to live in a little box? Yeah, turns out that was a stretch, to say the least.

As The Wall Street Journal reports, the SpaceX and Tesla CEO has quietly been living in a friend’s waterfront estate in Austin that a few years ago was listed as the most expensive house in the Texas capitol — and has been mansion-hunting with multiple real estate agents, to boot.

If the WSJ‘s anonymous sources are to be believed, it would counter Musk’s boastful minimalist narrative that began with him announcing in 2020 that he was going to sell the bulk of his worldly goods to live a simpler life, and ended with him selling off his final house to live in a glorified trailer near SpaceX’s South Texas Starbase.

According to these “people familiar with the matter,” though, Musk has actually been spending considerable time living in a house owned by billionaire Ken Howery, the cofounder of PayPal and erstwhile Trump ambassador to Sweden. Musk and Howery, the WSJ noted, were chief among the members of the so-called “PayPal mafia,” along with the other PayPal cofounder, Peter Thiel.

Though the report doesn’t give the address of the modern waterside mansion, a bit of Google sleuthing suggests that in 2018, Howery purchased what was then the most expensive house in Austin — a six-bedroom and seven-bathroom modernist monstrosity on the Colorado River that sits on its own little peninsula and sold at the time for a cool $12 million.

Beyond the huge-if-true implications that Musk was totally bullshitting when he said he was gonna recede from the materialist world, the WSJ report also reveals that Musk is registered to vote at a modest home near Starbase — not the prefabricated $50K box in which he’s supposedly slumming it.

Musk is so deeply engaged in his search for an Austin “trophy property,” the WSJ claims, that he’s so far dealt with several real estate agents, toured some houses in person, and has a team of advisers contacting brokers as he attempts to buy a large swath of land that’s not even on the market.

It shouldn’t be a big deal that the world’s richest man is trying to buy a multi-million dollar mansion — but when said megabillionaire insists on a seemingly false narrative of minimalism, that makes it a headline.

READ MORE: Elon Musk Says He Lives in a $50,000 House. He Doesn’t Talk About the Austin Mansion. [The Wall Street Journal]

Read This Next
Thanks Man!
After Sexual Allegations, Elon Musk Jets Off to Brazil
Wait Wait
Elon Musk Has a Ridiculous Excuse for Why He Suddenly Doesn’t Want to Buy Twitter
Musk Gonna Musk
Experts Say That Elon Musk Has No Idea How Math Works
Market Madness
Bill Gates Says He’s Quite Concerned About the Global Economy
Much to Unpack
Why Elon Musk Got Bullied In High School
More on Future Society
Notaverse
Yesterday on futurism
In Extremely Confusing Twist, Facebook Says It Isn’t Building a Metaverse After All
Smile!
Yesterday on futurism
Experts Alarmed by Zoom’s Tech for Detecting Users’ Emotions
Seriously?
Thursday on the byte
CEOs Exposed for Using Shockingly Stupid Passwords
READ MORE STORIES ABOUT / Future Society
Keep up.
Subscribe to our daily newsletter to keep in touch with the subjects shaping our future.
+Social+Newsletter
TopicsAbout UsContact Us
Copyright ©, Camden Media Inc All Rights Reserved. See our User Agreement, Privacy Policy and Data Use Policy. The material on this site may not be reproduced, distributed, transmitted, cached or otherwise used, except with prior written permission of Futurism. Fonts by Typekit and Monotype.