180 "ultra-fast" charging stations are coming over the next 3 years. 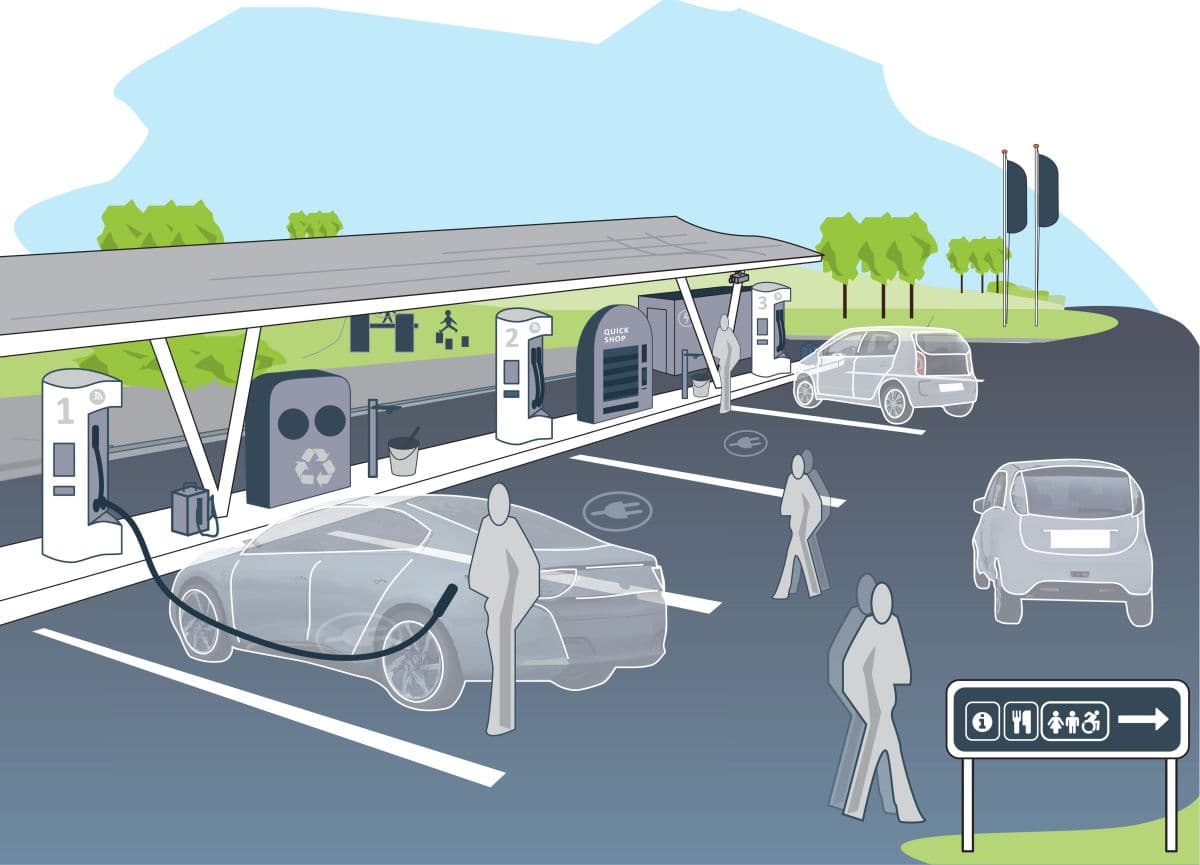 One More (EV Charger) for the Road

To facilitate the adoption of electric vehicles (EVs), consumers need to know it's just as easy to recharge EVs as it is to pump gas into a petrol or diesel car. We've seen companies like Tesla install hundreds of supercharger stations around the world — from the United States, to Australia and Europe, and even China. Automakers like BMW, Ford, and Volkswagen have come together for the pan-European charging network called IONITY, to install 400 charging stations in Germany, Norway, and Austria by 2020. In both cases, the stations are deliberately placed on highways or within populated urban areas to provide a convenient and reliable way for EV owners to charge up and get back on the road.

Now, two more companies — international energy and e-mobility company E.ON and Denmark e-mobility provider CLEVER — are partnering to build yet another network of charging stations. Over the next three years, their network will provide 180 "ultra-fast" charging stations across 7 countries between Norway and Italy. Each station has a capacity of 150 kW, putting it almost on par with Tesla's 145 kW stations, but behind IONITY's 350 kW capacity.

CLEVER isn't the only company E.ON has partnered with; in fact, their team-up only accounts for 160 of the 180 charging stations. The final 20 will come as part of a deal with Norwegian service station chain YX. Based on how well construction goes on the initial 180 stations, E.ON and CLEVER are open to expanding to 400 stations spread throughout Europe.

"Together with strong partners we are taking a joint step towards establishing a comprehensive ultra-fast charging infrastructure in Europe," said Frank Meyer, Head of Innovation and B2C at E.ON, in a statement. "We see a reliable ultra-fast charging network in combination with our home and destination solutions as main prerequisites for a mass market adoption of electric mobility."

The initiative has already received €10 million (nearly $12 million) in funding from the European Commission, and is only 1 of 4 projects chosen to be explored. The first series of stations will be located in Germany and Denmark, with each station containing 2-6 chargers. According to E.ON, each charger will be capable of fully charging a 400-km (248-mile) range battery in about 20-30 minutes. Of course, that's only a rough estimate, and the actual charging time will vary by car and battery capacity.

"We believe that the combination of being able to cater for almost any car brand, securing the right locations, and offering customers well thought through solutions will be part of convincing people that EVs are a real alternative to conventional cars,” said CLEVER CEO Casper Kirketerp-Møller.

We'll have to wait and see how successful and reliable their charging network will truly be, but consider their partnership to be another step forward to worldwide adoption of electric vehicles. Simply being a better alternative that diesel may be enough for some consumers to make the change, but convenience and availability of necessary resources goes a long way to winning people over. Hopefully we'll see other companies and car manufacturers make similar moves to further entice people away from traditional vehicles.

Read This Next
Remember Donald?
Donald Trump Goes on Bizarre Rant Against Electric Cars
Piercing The Hype
If Graphene Batteries Do Everything Scientists Say, They Could Be a Gamechanger
End of the Road
Volkswagen Will Launch Its Last Gas-Powered Cars in 2026
Electric Assist
China Forces Tesla and Other EV Makers to Turn Over Driver Data
Futurism
EVs Can't Change the World Until We Change How We Sell Them
More on Earth & Energy
His Power
9:17 PM on the byte
Scientists Develop Compound That Kills So Efficiently They Named It After Keanu Reeves
Dishonorable Disc...
Yesterday on the byte
Scientists Alarmed by Video of Deep Sea Mining Company Spewing Waste Into Ocean
Save Yourselves
Feb 5 on the byte
Furious Marsupial So Thirsty For Sex That It’s Dying, Scientists Warn
READ MORE STORIES ABOUT / Earth & Energy
Keep up.
Subscribe to our daily newsletter to keep in touch with the subjects shaping our future.
+Social+Newsletter
TopicsAbout UsContact Us
Copyright ©, Camden Media Inc All Rights Reserved. See our User Agreement, Privacy Policy and Data Use Policy. The material on this site may not be reproduced, distributed, transmitted, cached or otherwise used, except with prior written permission of Futurism. Articles may contain affiliate links which enable us to share in the revenue of any purchases made.
Fonts by Typekit and Monotype.