The Earth's magnetic North has moved 1,400 miles since it was discovered in 1831. 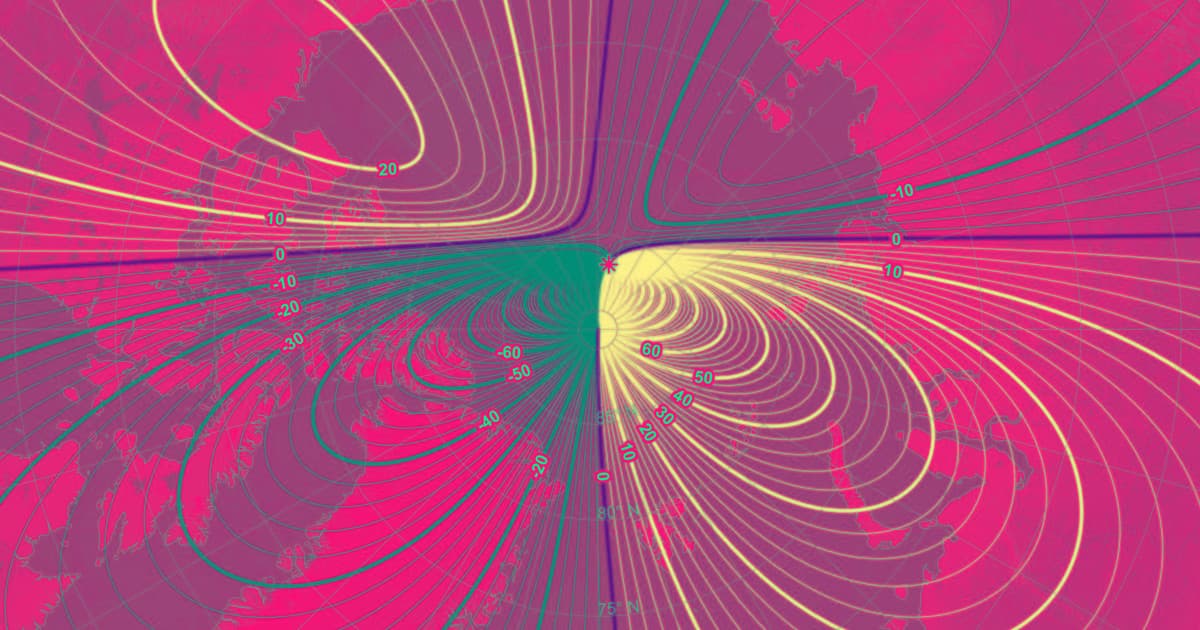 We know that Earth's magnetic North Pole doesn't quite line up with the North Pole on a world map — it's wandered, at a glacial pace, about 1,400 miles since its first discovery in 1831, according to the National Oceanic and Atmospheric Administration (NOAA).

What scientists didn't expect, however, is that the magnetic North Pole has been wandering towards Siberia at an increasing pace, Science Alert reports. It even crossed the Greenwich meridian, the invisible line that determines time zones, for the first time in its recorded history.

That could potentially wreak havoc on positioning systems, military operations, and other processes that rely on measuring the magnetic pole.

The magnetic North Pole was found to be drifting toward Russia at about 34 miles per year, slowing recently to just 25. Despite the most recent slowdown, "the movement since the 1990s is much faster than at any time for at least four centuries," geomagnetic specialist Ciaran Beggan from the British Geological Survey (BGS) told the Financial Times.

"We really don't know much about the changes in the core that's driving it," Beggan added.

Last week, scientists revealed the new version of the World Magnetic Model, a representational model that helps navigation systems to align with geographic reality, released every five years. The last update was released in 2015, making this update slightly early — an intentional attempt to catch up with the ever-increasing pace of the magnetic north's movement.

The fluctuations could be caused by jet stream-like flows of liquid iron inside the Earth's core, though scientists are only beginning to understand those dynamics. A January report published in Nature suggests it could have something to do with hydromagnetic waves from deep in the planet’s core.

While it won't be the first reversal of Earth's magnetic field, experts predict such a reversal won't happen for hundreds to thousands of years, as FT reports — the last reversal occurred 780,000 years ago.

Read This Next
Dude, Where's My Spacecraft
"Cosmic Lighthouses" Could Help Astronauts Navigate Space
Futurism
New Superconducting Magnet Smashes World Record
Futurism
We Just Moved One Step Closer to Finally Detecting Dark Matter
Futurism
Researcher Claims To Have Uncovered Evidence of a "Sixth Sense" In Humans
Futurism
New Images Reveal How Quickly Earth's Magnetic Field is Changing
More on Hard Science
Tractor Beam
Jan 26 on the byte
Scientists Build Working Tractor Beam, Although It's Comically Tiny
Having a Blast
Jan 18 on the byte
New Study Shows Where You Should Hide to Survive a Nuclear Attack
Offworld Amino
Jan 15 on the byte
Scientists Find Building Blocks of Life in Meteor That Smashed Into Family's Driveway
READ MORE STORIES ABOUT / Hard Science
Keep up.
Subscribe to our daily newsletter to keep in touch with the subjects shaping our future.
+Social+Newsletter
TopicsAbout UsContact Us
Copyright ©, Camden Media Inc All Rights Reserved. See our User Agreement, Privacy Policy and Data Use Policy. The material on this site may not be reproduced, distributed, transmitted, cached or otherwise used, except with prior written permission of Futurism. Articles may contain affiliate links which enable us to share in the revenue of any purchases made.
Fonts by Typekit and Monotype.