"We know that these minerals are all essential for the emergence of life." 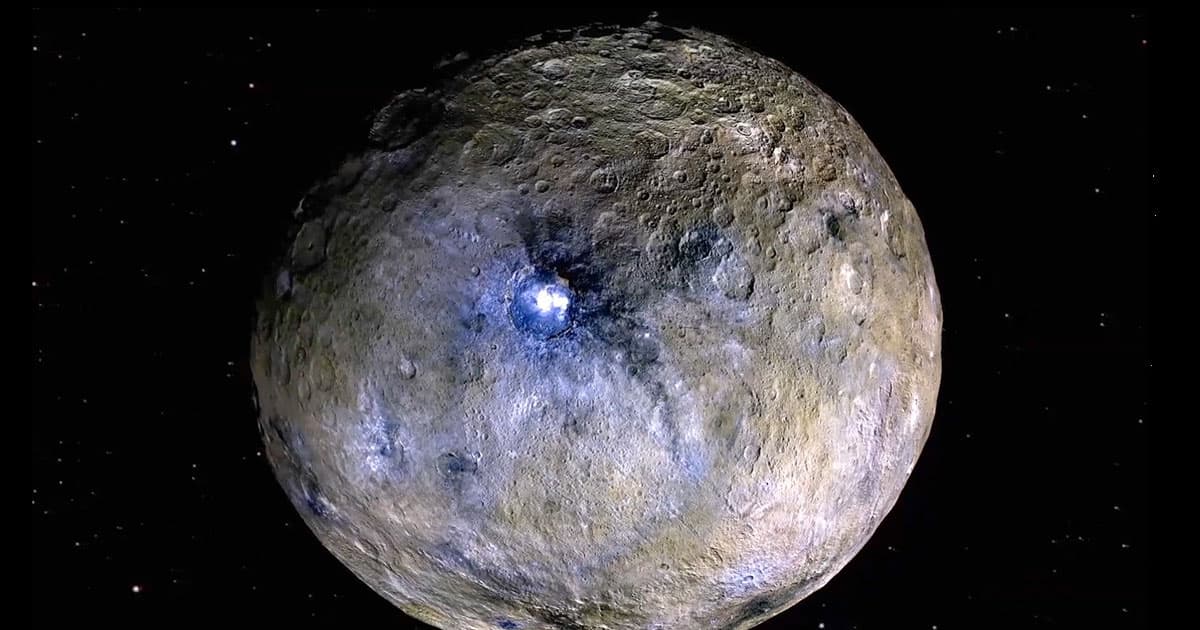 According to several new studies published today in the journal Nature, Ceres, the largest object in the asteroid belt between the orbits of Mars and Jupiter, likely holds massive reservoirs of sea water underneath its surface. Yes: An ocean planet.

A team of researchers found evidence of an "extensive reservoir" of brine beneath the surface of the 20-million-year-old Occator crater on Ceres using high definition images from NASA's Dawn spacecraft.

Ceres is the only dwarf planet in the inner solar system. It's only 590 miles across and takes 1,682 Earth days (4.6 years) to orbit the Sun. It has a very thin atmosphere of water vapor from ice volcanoes.

The recently discovered reservoir is roughly the size of Utah's Great Salt Lake and is thought to be filled with extremely salty water — which is what stopped it from freezing.

NASA's Dawn spacecraft, a now-retired space probe that launched in 2007, took the images from just 22 miles from the surface during a second run in 2018.

The team analyzed infrared images and found evidence of hydrohalite, a material commonly found in sea ice on Earth, which has never been observed on another planet.

Scientists suspect this reservoir was formed in the Occator crater after another space rock impacted with the location some 20 million years ago. The scientists believe that after this impact, the surface of the crater froze over, forming a large reservoir of melt water beneath.

"The material found on Ceres is extremely important in terms of astrobiology," Maria Cristina De Sanctis, a researcher at the Istituto Nazionale di Astrofisica in Rome, Italy, co-author of one of the new papers and Dawn team member, told AFP.

"We know that these minerals are all essential for the emergence of life," she added.

“It’s really kind of a smoking gun, because you would have expected it had gone away if it had been sitting there even close to the surface for millions of years,” Dawn Principal Investigator Carol Raymond of NASA's Jet Propulsion Lab told Astronomy.

“Past research revealed that Ceres had a global ocean, an ocean that would have no reason to exist [still] and should have been frozen by now,” De Sanctis told Astronomy. ”These latest discoveries have shown that part of this ocean could have survived and be present below the surface.”

More on Ceres: Traces of Organic Molecules Have Been Located on Ceres

Read This Next
Into Darkness
Inside NASA's Bold Proposal to Probe the Mysteries of Dark Matter
Martian Ammonia
NASA Rover Detects Organic Molecules on the Surface of Mars
Myanus, Hisanus, Heranus...
Here's What Uranus Scientists Think About Your Disgusting Jokes
Joseph Strikes Again
Experts Shred Paper Claiming to Identify Mushrooms on Mars
Mars Shrooms
Extremely Dubious Research Claims to Spot Fungus Growing on Mars
More on Hard Science
Moved to Tears
Jun 30 on the byte
Scientists Say New James Webb Images Are So Powerful That It Was Emotional Just Looking at Them
Good God
Jun 28 on the byte
Huge Cloud of Toxic Yellow Gas Kills 13
zombie star
Jun 28 on futurism
Scientists Puzzled by Star That Exploded in Supernova But Somehow Survived
READ MORE STORIES ABOUT / Hard Science
Keep up.
Subscribe to our daily newsletter to keep in touch with the subjects shaping our future.
+Social+Newsletter
TopicsAbout UsContact Us
Copyright ©, Camden Media Inc All Rights Reserved. See our User Agreement, Privacy Policy and Data Use Policy. The material on this site may not be reproduced, distributed, transmitted, cached or otherwise used, except with prior written permission of Futurism. Fonts by Typekit and Monotype.