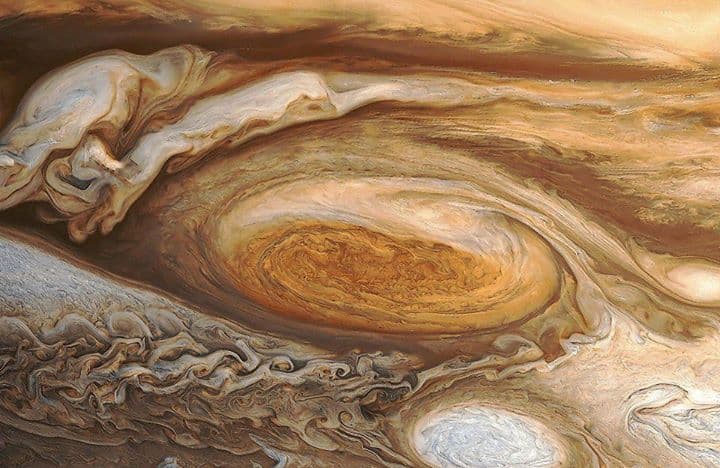 Earth is quite picturesque from a few thousand miles away. It is equipped with beautiful hues of green that are spread between large gaps of rolling seas of blue, and of course, there are large collections of fluffy white clouds that dance across the face of the planet. The images taken from this vantage point remind us that Earth is quite stunning. Out of the rest of the planets in our solar system, only one other planet (Jupiter) has the variety of colors that we are  accustomed to seeing when viewing space-based images of our home planet. In all other cases, the bland, colorless worlds are a stark reminder that our planet is very much alive. Ultimately, Earth's colors signify its abundance of life. However, in Jupiter's atmosphere, the intense colors signify something entirely different...

So what do these colors mean? How does Jupiter stack up against our own planet?

First off, (and rather surprisingly), Jupiter's composition is very similar to that of the sun. Both objects consist of an abundance of hydrogen and helium, with Jupiter having a bit of sulfur present. None of these things are particularly conducive to human life. In fact, the only thing that Jupiter really needs to be like the sun is more mass. With that, it may have ignited and become a star instead of a planet - complete with a working (albeit small) solar system of its own. It already has a myriad of some of the most massive and interesting moons found in our solar system. Galileo discovered 4 of them, which are now known as the Galilean moons. Ganymede is the largest of Jupiter's moons; it's also the largest moon in our solar system. In fact, it's even larger (but less massive) than the innermost planet of our solar system - Mercury. Another moon, Europa, is home to a vast collection of water frozen beneath an icy surface. Callisto (one of my personal favorites) is the most scarred surface in our solar system, whilst Io is the most volatile - containing more than 400 active volcanoes.

But back to the topic at hand... deep within the atmosphere of the largest planet in our solar system, the pressure near Jupiter's core exceeds 40 million times that of the atmospheric pressures within Earth. What's more, the temperature increases to become significantly hotter than the surface of our Sun. The composition near the core of the planet remains largely unknown (hopefully, Juno's arrival in the next few years will shed some light on this issue). For the time being, the general consensus between astronomers is that the core consists mostly of iron, with a rock/ice substance that's roughly equivalent in size with Earth (the rock/ice mixture is able to remain in a solid state, despite the temperature, due to the atmospheric pressure within Jupiter's core). All of these are submerged in a mixture of liquid helium and hydrogen. Far within the depths of the planet, the hydrogen becomes metallic and electrically conducting. Both of those things - along with Jupiter's fast rotation - help perpetuate a magnetic field that is 20,000 times more powerful than Earth's (they also give rise to a magnetosphere that is, quite literally, larger than the sun).

The tapestry of eye popping colors visible in Jupiter's atmosphere are mainly due to lethal clouds of ammonia. If you could get anywhere near Jupiter without dying a painful death (you couldn't), the smell of the ammonia would be rather unpleasant... terribly unpleasant (think, dried cat pee). Some water exists farther inwards (maybe even the largest ocean in our solar system), but it can only be observed through the occasional clear spots in the clouds. The planet's large and complex "stripes" of reddish brown are actually dark belts created by strong east-west winds - the minimal speeds of the winds far exceed the harshest wind speeds of terrestrial hurricanes. We're talking about hurricanes that are so fast, they are capable of destroying anything and everything that's unlucky enough to fall within their unforgiving path.

Speaking of hurricanes, the most vicious storms observed on Earth pale in comparison to Jupiter's strongest storms. The planet's most famous storm is Jupiter's Great Red Spot. Some of you may be wondering why the storm is red instead of another color. Astronomers think that it's likely due to a number of complex organic molecules, which include red phosphorus and additional quantities of sulfur, dwelling in the atmosphere. The storm was first observed over 400 years ago (Giovanni Cassini may have been the first to ever witness it in the 1600's), and is so large, it is capable of engulfing three Earth-sized objects in its diameter. Winds from the outer-layer of the storm can reach speeds exceeding 432 km/h. Another interesting thing to note is that astronomers were actually able to observe three smaller storms merge into one mega storm, which was capable of swallowing Earth whole in one fell swoop... whilst traveling the face of the planet going over 384 MPH. The Great Red Spot has been a recognizable feature across the face of Jupiter for many years now. Its ultimate fate is unknown. Hopefully, it will remain over the long haul, continuing to captivate many youngsters from far stretches of the globe.