The Galilean Moons of Jupiter 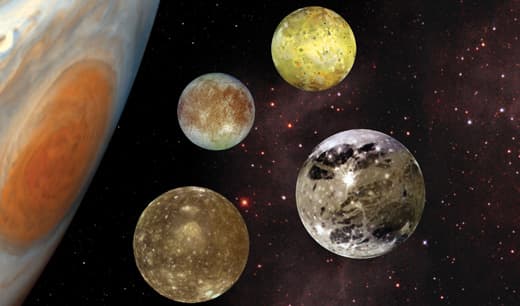 How much do you know about
Jupiter's Moons?

Io, Callisto, Europa, and Ganymede are the four Galilean moons (pictured here in that order). They are some of the most well-known moons in the solar system, mainly because they are the most visible moons in our celestial neighborhood – behind our own moon, that is. The Galilean moons are some of the first ‘invisible’ objects amateur astronomers are able to see when they turn their telescopes to the sky.

When Galileo originally discovered the moons in 1610, he called them the Medician Stars, which honors the family of Cosimo de’ Medici. Four years later, a German astronomer by the name of Simon Marius suggested the names of Zeus’ lovers (the Greek Equivalent of Jupiter). These names ultimately prevailed and, nearly three centuries later, the International Astronomical Union formally assigned these long-established names to the moons. The term “Galilean moons” collectively refer to these four moons and are named ever-so-obviously after Galileo... since he discovered them.

The moons themselves are some of the largest in objects in the solar system, both by diameter and mass. The discovery of these moons dealt a near-fatal blow to the geocentric model held at the time, which stipulated that the universe revolved around the Earth. Observations of the Galilean moons proved that not everything in the heavens moved around us, opening the way for the heliocentric model.

In addition, the discovery proved that there were objects in the sky not visible to the naked eye, as well as details of celestial objects that can’t be observed without some sort of assistance. This essentially opened the way for the entire field of modern astronomy, which uses telescopes to see further and more clearly than we can see with the unaided eye.

Three of the moons, Io, Europa, and Ganymede (listed from closest to furthest from Jupiter) orbit with a 1:2:4 orbital resonance respectively. A resonance occurs when the gravity of two or more orbiting bodies periodically act on each other in a similar way. This basically means that, for every four orbits Io makes, Europa orbits twice and Ganymede orbits once. Approximately every seven days, these three moons are in the same position as they were the previous week.

To see a gif of this resonance, see: http://upload.wikimedia.org/wikipedia/commons/8/83/Galilean_moon_Laplace_resonance_animation.gif

The moons are actually bright enough that you *could* see them with the naked eye. The reason you can’t is because Jupiter is bright enough to drown them out. The moons would need to be further away from Jupiter to be seen, or Jupiter’s composition would have to change to absorb more sunlight...or it would simply need to vanish completely. However, getting rid of Jupiter isn’t as hard as it seems. If you cover up Jupiter with a small object, it is possible to see Ganymede and Callisto when they are at their semi-major axes. Technically, if you have very good eyesight, you could see the moons without covering up Jupiter, but it’s much harder to ensure you actually see the moons instead of hallucinating their existence.

Of course, you could always use a low-powered telescope or binoculars. You’ll even get a much better view this way.