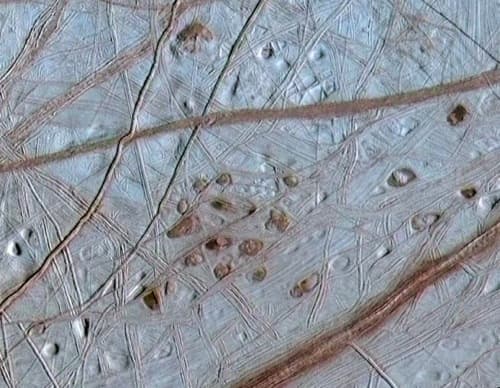 Most of us have a very special place for Europa in our hearts. Physically, this is the second closest of the Galilean satellites and Jupiter’s sixth closest moon; it is also the smallest of the four Galilean moons. Even then, Europa is one of the largest moons in the solar system, tipping the scales as the fifteenth largest object and the sixth largest moon in our solar system by both mass and diameter. Europa is the only Galilean moon that is smaller than Earth’s moon; and only by just a little. Europa has an orbital period of 3.6 days.

These facts and figures make Europa interesting, but they aren’t what give the icy moon a warm home in our thoughts and imagination. Many scientists believe the moon is home to a subsurface ocean making it one of the best candidates in our solar system for housing extraterrestrial life.

ocean: Europa has an “induced magnetic field through interaction with Jupiter”. One of the simplest explanations for how this magnetic field comes about is with the presence of a conductive layer beneath the surface. Scientists are so interested in Europa that the ESA has a planned mission called the 'Jupiter Icy Moon Explorer' (or, JUICE) which is currently scheduled to launch in 2022. The mission will explore Europa, Ganymede, and Callisto for evidence of liquid water and other properties.

In Europa’s case, studying the ocean won’t be easy for it is surrounded by layers of ice estimated to be 100 km thick. At least, when we eventually land a probe on Europa, it

won’t have to deal with too many topographical features. Europa is one of the smoothest objects in the solar system, due mostly because the moon is geologically active. One of the most prominent features seen on the icy surface is the existence of lineae (meaning literally 'lines') which streak across the moon’s surface. Some of these are probably similar to Earth’s oceanic ridges and are caused by tidal stresses acted upon it by Jupiter.

Europa is also home to a tenuous atmosphere which is mostly comprised of oxygen. ‘Tenuous’ is putting it lightly because the surface pressure on the moon is approximately a trillion times less than Earth’s.

Interestingly enough, most of what we know about Europa comes from data collected by the Galileo; a probe named after the man who discovered the icy body more than four centuries ago. I look forward to future missions and observations as we continue to uncover the mysteries contained within the Jovian system.