Does Vulcan Really Exist? (If So, Could We Find It?) 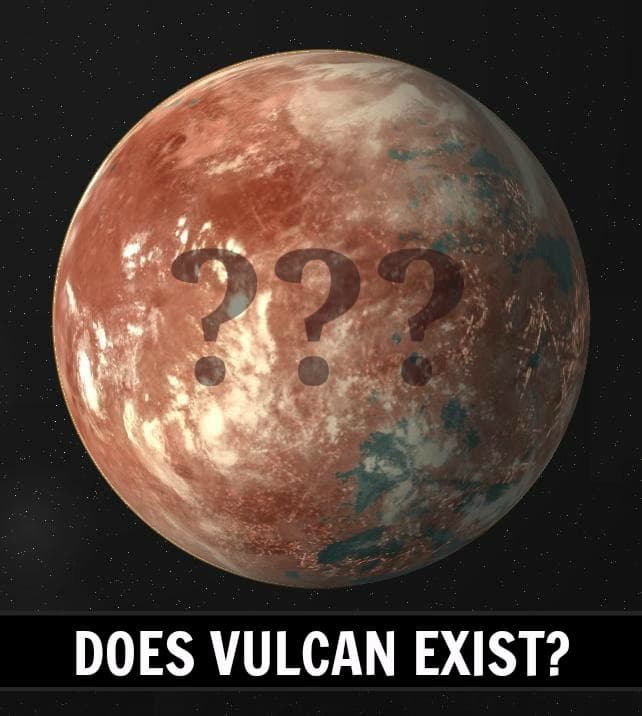 We all know that science fiction is often based on science fact. This is especially true of Star Trek. Of course, given its 40 year history, it was inevitable that the creators of Star Trek would get some things right. However, from handheld communicators (cell phones), to warp drive (Alcubierre drive), to tractor beams (optical fractionation) the creators of Star Trek have proven that they were more than just individuals who made lucky guesses: They were visionaries, forward-thinking dreamers who looked to the future and imagined a world where anything imaginable was scientifically conceivable. It seems that, as we continue to advance technologically, even the most fantastical devices from this series are being brought within our grasp.

But, was Star Trek right about life’s most important questions: Are we alone in the universe, or is the cosmos teeming with life? Is this a place of infinite silence, or are there other species out there that would be willing to form…a federation? Unfortunately, we aren’t quite ready to answer these questions. But we can take baby steps that move us in that direction. Thus, the first step is finding other habitable planets. So let’s follow Star Trek’s lead and look for one of the most well-known planets in the series: Vulcan.

In July of 1991 the creator of Star Trek, Gene Roddenberry, announced that the triple star-system 40 Eridani is the home of the Vulcans. This system is some 16 light-years from Earth, which is about 94 trillion miles (151 trillion km) away. Unfortunately, it would take us nearly 81,000 years to reach the *closest* star. So traveling to 40 Eridani isn’t going to be possible until we completely revolutionize how we use energy, or how we travel through space. But we’re not looking to take a vacation; we’re just trying to find a habitable planet.

Two of the stars in this system are immediately ruled out as possible candidates for hosting a Vulcan-like planet. These are 40 Eridani B (a white dwarf) and 40 Eridani C (a red dwarf flare star). It’s unlikely that we will find habitable planets around either of these stars as any planet around Eridani B would have been obliterated when it turned into a white dwarf, and the intermittent flares given off by Eridani C would make life around this star…unpleasant (you’d get fried by X-ray emissions).

However, 40 Eridani A seems to be a prime candidate. This is a main-sequence dwarf (a red-orange star that is slightly smaller and cooler than our sun). The habitable zone of 40 Eridani A (the boundary in which liquid water could theoretically exist on a planet’s surface) is about 63 million miles (101 million km) from the star.

A planet orbiting at this distance would complete a revolution in 223 Earth days. So Vulcans would get to celebrate their birthdays about every 6 months (maybe that’s the key to their extreme age?). This star is estimated to be about the same age as our Sun, some 4 billion years. So planets would (theoretically) have enough time to form, and life would (theoretically) have enough time to evolve.

So it seems that Rodenberry chose well and, most importantly, scientists agree!

40 Eridani A was suggested as one of the primary targets of NASA’s Terrestrial Planet Finder (TPF), the Space Interferometry Mission, and the Darwin spacecraft. All of these missions were designed to detect Earth-like planets orbiting nearby stars and search for evidence of life on these planets.

Unfortunately, these missions have been indefinitely postponed due to budget cuts. It seems that, at least for the time being, our primary mission is not to explore strange new worlds, or seek out new life, or boldly go anywhere… Cheesy? Perhaps. True? Definitely. But with any luck, we'll know if there is a planet orbiting this star within the next decade or so.

What planets concocted in the Star Wars universe have real-life counterparts? Find out here. Or, learn about the real Pandora.