Pushing physics to its absolute limits. 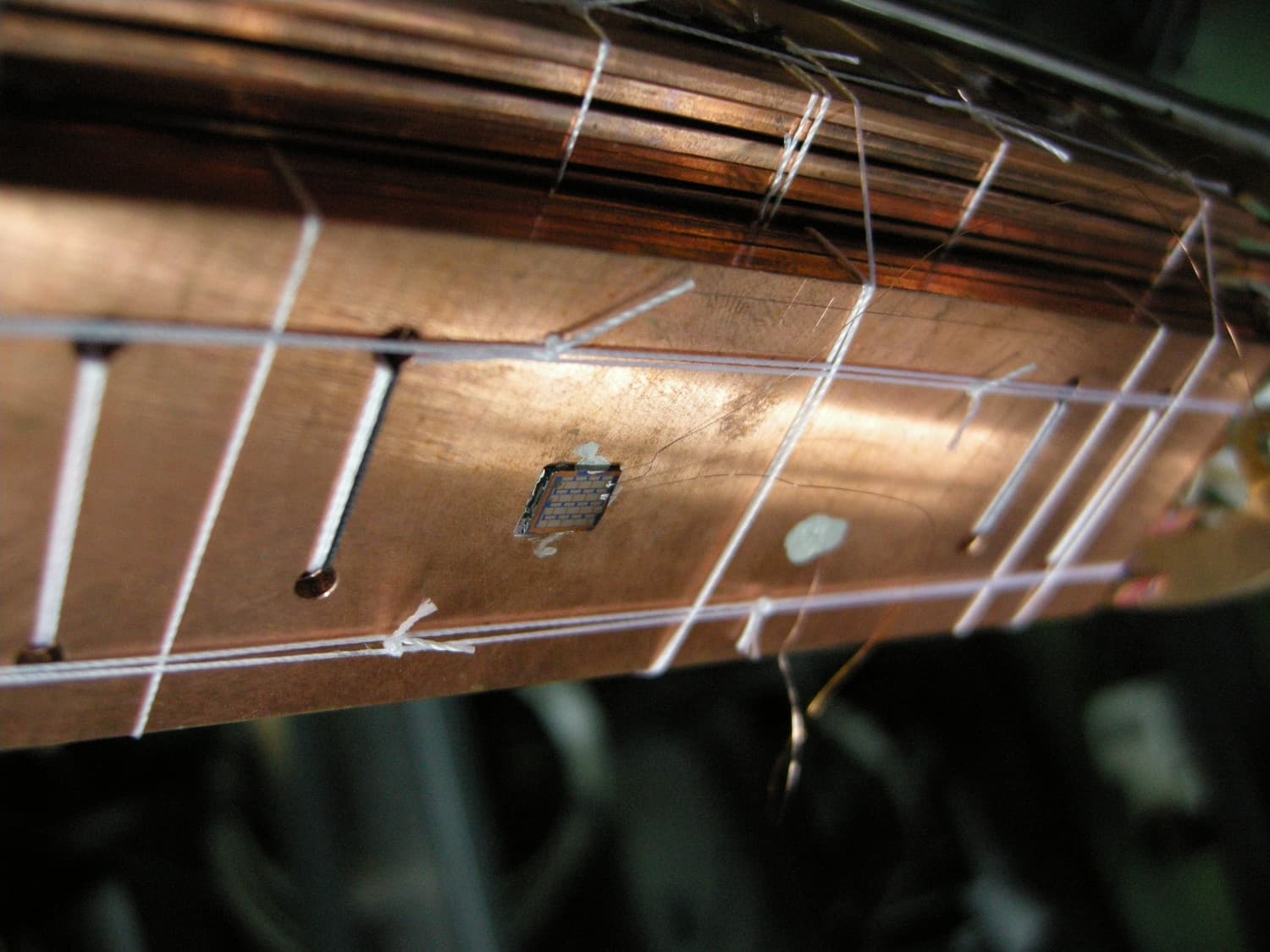 Image by University of Basel

Scientists have long been intrigued by the physics near absolute zero — the temperature 0° Kelvin, or -273.15°C, where particles reach the lowest possible amount of movement — ever since this limit was theorized. Yet reaching absolute zero has been called impossible: as you continue to remove heat from a gas to cool it, the work needed to remove the heat increases. At this temperature, the work to remove additional heat becomes infinite.

This doesn't discourage scientists from trying, however. A group at the University of Basel recently have developed a device that gets us closer than ever before to the coldest of cold, and could allow them to explore the strange physics that is thought to occur near absolute zero.

The team developed a nanoelectronic chip that can cool to a record 2.8 millikelvin. The device uses magnetic cooling, through an applied magnetic field, to diminish the chip's electrical connections to 150 microkelvin. Using a designed magnetic field system, the team also cooled a thermometer in order to measure temperature, and kept the chip cold for seven hours. This extended period of time allowed the team to explore this ultra-cooled state.

While the chip itself is impressive, it's not even the most exciting part of this experiment. This chip opens up an enormous potential to better understand what happens to physics near absolute zero. This understanding could continue to increase, as the researchers are hoping to improve the device and their experiment to eventually reach a bone-chilling 1 millikelvin.

Within the past year, the observable limit (also known as the quantum backaction limit) of how low you can theoretically cool an object has been experimentally challenged. Researchers were able to cool an object to less than one-fifth of one quantum, which is below the "quantum limit." But later on, scientists officially proved the third law of thermodynamics by showing that it is mathematically impossible to cool to absolute zero.

The strange physical space on the cusp of reaching absolute zero is relatively unexplored, as it has been so difficult to reach experimentally. With our newfound ability to research this uber-cold state, there is still much to learn about physics at these temperatures.

Additionally, understanding absolute zero could potentially improve modern electronics. The performance of transistors is greatly affected by temperature. Traditional transistors run into a whole host of issues when they overheat, which happens commonly. The transistors used in computers, smart devices, and other commercially available electronic devices are shown to be much more efficient at extremely low temperatures, like those barely above absolute zero.

Read This Next
Quacks Like a Duck
Those Headlines About Scientists Building a Wormhole Are Total Nonsense, People
Good Samaritan
Physics Dept Gets Random Box Full of $180K in Untraceable $50s and $100s
Spin Me Right Round Baby
Scientists Are Investigating If Time Warps Near a Nuclear Reactor
Brands We Love
The VentiFresh ECO Uses NASA-Inspired Tech To Eliminate Odor And Airborne Germs
Brands We Love
Go Beyond The Science Headlines With The Fundamentals Of Physics Course
More on Hard Science
Tractor Beam
Thursday on the byte
Scientists Build Working Tractor Beam, Although It's Comically Tiny
Having a Blast
Jan 18 on the byte
New Study Shows Where You Should Hide to Survive a Nuclear Attack
Offworld Amino
Jan 15 on the byte
Scientists Find Building Blocks of Life in Meteor That Smashed Into Family's Driveway
READ MORE STORIES ABOUT / Hard Science
Keep up.
Subscribe to our daily newsletter to keep in touch with the subjects shaping our future.
+Social+Newsletter
TopicsAbout UsContact Us
Copyright ©, Camden Media Inc All Rights Reserved. See our User Agreement, Privacy Policy and Data Use Policy. The material on this site may not be reproduced, distributed, transmitted, cached or otherwise used, except with prior written permission of Futurism. Articles may contain affiliate links which enable us to share in the revenue of any purchases made.
Fonts by Typekit and Monotype.