The instrument has the potential to "spark a revolution in theoretical physics." 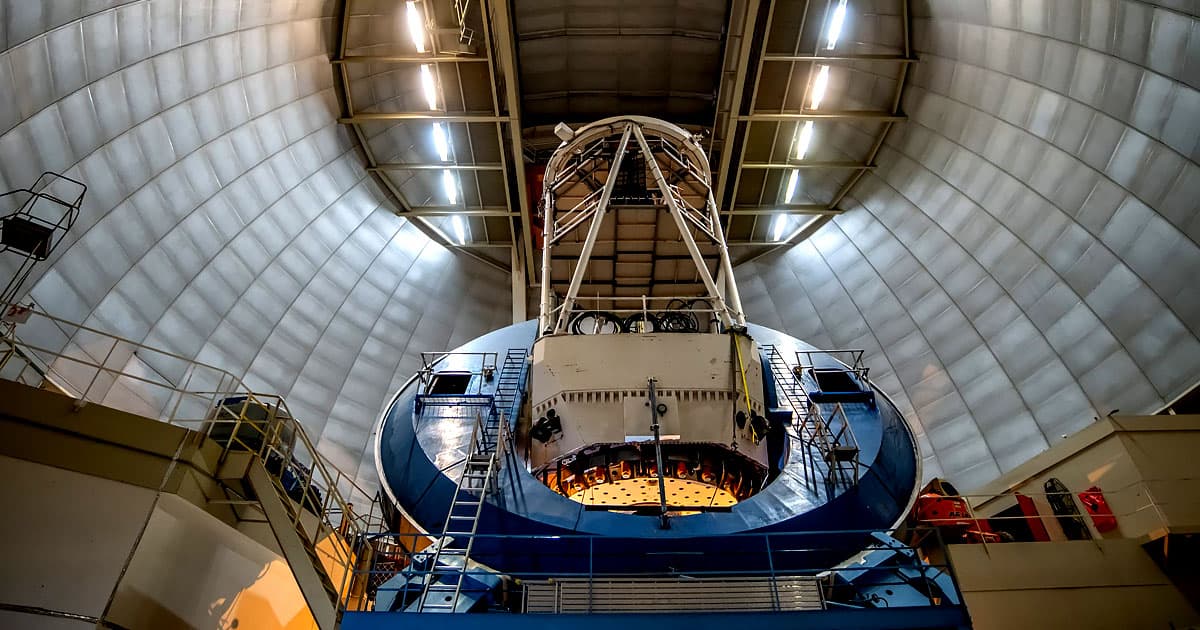 Astronomers have long puzzled over the mystery of dark energy, a mysterious substance that appears to make up almost 70 percent of the universe and which seems to be intricately linked to the cosmos' expansion.

The new instrument will map the overall structure of the universe, up to about 11 billion light years from Earth according to a press release, to see how fast and how much it's expanding — and perhaps give us clues about the nature of dark energy in the process.

The device's robotic array of 5,000 fiber-optic "eyes" is designed to automatically narrow its gaze at sets of galaxies and map their exact distance from Earth by gathering their light and splitting that light into narrow bands of wavelengths. And at a dizzying rate: it can cycle through 5,000 galaxies every 20 minutes. Astronomers are hoping to begin formal observations early next year.

To professor of astrophysics at the University of Portsmouth Bob Nichol, DESI has the potential to "spark a revolution in theoretical physics" by examining the mysteries surrounding dark energy and the fundamental laws, if there are any, that constrain the size and expansion of the universe.

"Despite the fact that most physicists have now accepted that there is such a thing as dark energy, we still do not know its exact form," he wrote in a piece for The Conversation. But "new instruments like DESI will help take the next step in resolving the mystery."

The new instrument could also tackle some even more fundamental laws of astrophysics that have been upheld for over a century.

"DESI should also be able to constrain, and even kill, many theories of modified gravity, possibly providing an emphatic confirmation of Einstein's Theory of General Relativity on the largest scales," Nichol added. "Or the opposite—and again that would spark a revolution in theoretical physics."

READ MORE: Dark energy: new experiment may solve one of the universe’s greatest mysteries [The Conversation]

More on dark energy: Some Black Holes May Actually Be Blobs of Dark Energy

Read This Next
Take That Newton
New Study Claims Dark Matter Doesn't Exist
Great Scott
NASA-Funded Scientist Claims New Thruster Could Approach Light Speed
Time Twister
Astrophysicist Says He Knows How to Build a Time Machine
Dark Matter Gunshot
Study: "Dark Matter Bullets" Could Tear Human Flesh Apart
Futurism
When You Play Mass Effect, You’re Playing With Dark Matter
More on Sci-Fi Visions
Getting Worse
Friday on the byte
Bitcoin Just Had Its Worst Month in Crypto's Entire History
FROM THE DEPT. OF...
Friday on futurism
Good Buys: Outer Brown Wicker Outdoor Armchair Conversation Set
FROM THE DEPT. OF...
Friday on futurism
Oh, Say Can You See These Amazing 4th of July Sales
READ MORE STORIES ABOUT / Sci-Fi Visions
Keep up.
Subscribe to our daily newsletter to keep in touch with the subjects shaping our future.
+Social+Newsletter
TopicsAbout UsContact Us
Copyright ©, Camden Media Inc All Rights Reserved. See our User Agreement, Privacy Policy and Data Use Policy. The material on this site may not be reproduced, distributed, transmitted, cached or otherwise used, except with prior written permission of Futurism. Fonts by Typekit and Monotype.