The comet's interior is "fluffier than froth on a cappuccino, or the foam found in a bubble bath." 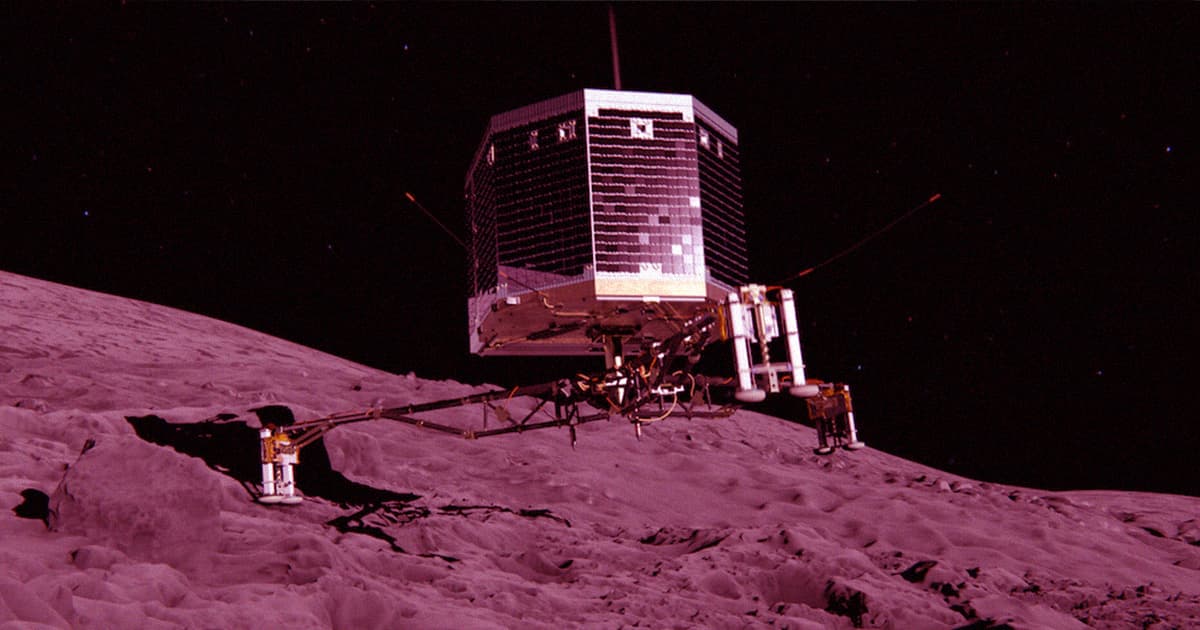 In 2014, the European Space Agency's Rosetta spacecraft released a tiny lander called Philae over the surface of 67P/Churyumov-Gerasimenko, a comet of ice and rock some 370 million miles from Earth.

Philae crash-landed on the comet, failing to deploy its harpoons and bouncing off the surface before disappearing behind a cliff. But now, clues about its final minutes are providing unprecedented insight into the interior of the icy space object.

Over the years, scientists have managed to glean where it first bounced from the surface — and its final resting place, thanks to images taken by the Rosetta spacecraft.

But where did it bounce off of on its way to its own demise, leaving a large imprint behind? The answer offers tantalizing clues about the nature of billions-of-years-old comets like 67P, and how they were formed.

According to the data, the lander spent two full minutes at this second 'touchdown' site. "Philae had left us with one final mystery waiting to be solved," ESA’s Laurence O’Rourke, who helped find Philae, said in a statement.

"It was important to find the touchdown site because sensors on Philae indicated that it had dug into the surface, most likely exposing the primitive ice hidden underneath, which would give us invaluable access to billions-of-years-old ice," O'Rourke added.

So the team got to work, analyzing data from when Philae hit 67p's surface for the second time. The tiny probe's magnetometer, an instrument designed to study the magnetic field of the comet's local environment, actually struck the comet's surface as the probe spun around, making full contact on four occasions.

On one occasion, Philae stuck its magnetometer a full 25 centimeters into the ice, leaving a visible mark in the shape of a "skull face," as O'Rourke describes it.

In fact, the ice underneath, exposed by Philae's thrashing, appeared much brighter in later images as it hadn't been exposed to the space environment.

It's also, notably, the first time scientists have been able to measure the softness of 67P's slushy interior — and as it turns out, it's pretty damn soft.

"The simple action of Philae stamping into the side of the crevice allowed us to work out that this ancient, billions-of-years-old, icy-dust mixture is extraordinarily soft — fluffier than froth on a cappuccino, or the foam found in a bubble bath or on top of waves at the seashore,” O'Rourke said.

"That the comet has such a fluffy interior is really valuable information in terms of how to design the landing mechanisms, and also for the mechanical processes that might be needed to retrieve samples," Matt Taylor, ESA’s Rosetta project scientist, argued.

READ MORE: The final mystery of Philae, the lost comet lander, has been solved [CNET]

More on the comet: Watch This Breathtaking, Close-Up Clip Of The Surface of A Distant Comet

Read This Next
Water Canyon
Scientists Spot Hidden Water in Mars' Grand Canyon
Star Stream
Something Is Ripping Apart the Nearest Star Cluster to Earth
Tiny Flares
Scientists Found Something Surprising in Closest-Ever Photos of the Sun
Say Cheese
A Space Probe Just Took the Closest Pictures of the Sun Ever
Glowing Green
Scientists Detect Green Glow on Mars
More on Hard Science
Moved to Tears
Thursday on the byte
Scientists Say New James Webb Images Are So Powerful That It Was Emotional Just Looking at Them
Good God
Tuesday on the byte
Huge Cloud of Toxic Yellow Gas Kills 13
zombie star
Tuesday on futurism
Scientists Puzzled by Star That Exploded in Supernova But Somehow Survived
READ MORE STORIES ABOUT / Hard Science
Keep up.
Subscribe to our daily newsletter to keep in touch with the subjects shaping our future.
+Social+Newsletter
TopicsAbout UsContact Us
Copyright ©, Camden Media Inc All Rights Reserved. See our User Agreement, Privacy Policy and Data Use Policy. The material on this site may not be reproduced, distributed, transmitted, cached or otherwise used, except with prior written permission of Futurism. Fonts by Typekit and Monotype.