In Upcoming Court Case, AI Will Tell Defendant Exactly What to Say Via Earpiece

Could an AI legal assistant really replace a human lawyer? 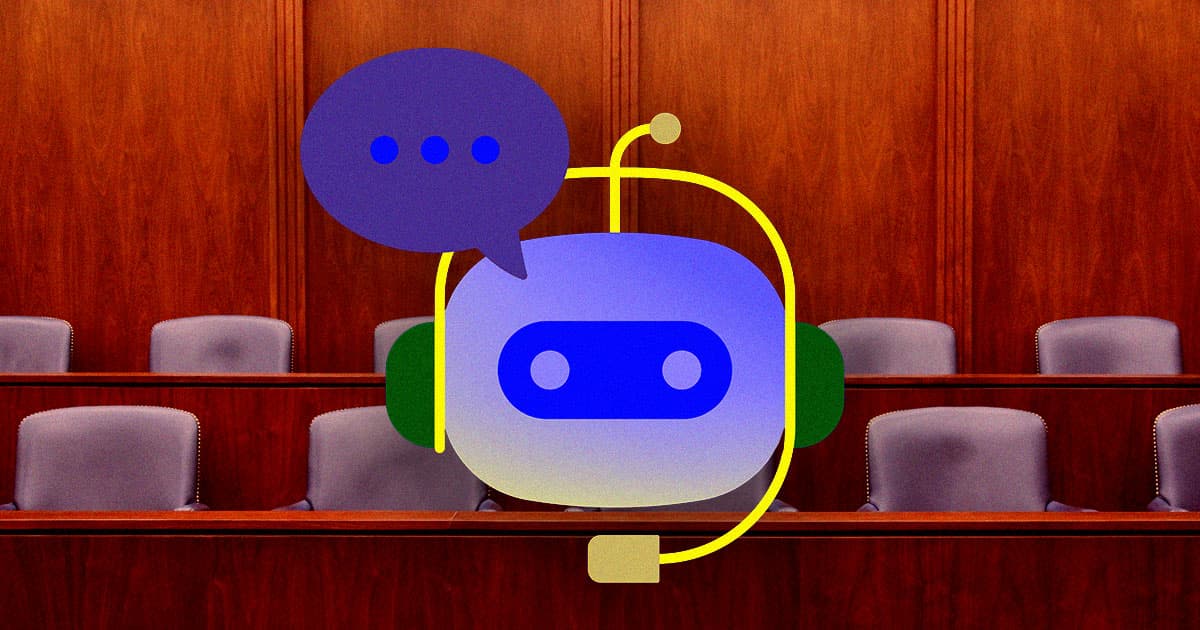 Artificial intelligence isn't just capable of generating a convincing college essay for you or making you look good in your next selfie — it might even help you get out of a speeding ticket in court.

An AI-based legal assistant created by San Francisco-based startup DoNotPay is about to advise a defendant in court for the first time, New Scientist reports, telling them what to say throughout an entire case.

According to the company, which is keeping the location and name of the defendant secret for privacy reasons, the defendant was charged with speeding.

The AI legal assistant will instruct the defendant via an earpiece during the case. If it doesn't work out, DoNotPay willing cover any potential fines.

As New Scientist points out, this kind of use of the technology is illegal in most countries, but the company says it found a location where it can skirt around these rules.

DoNotPay isn't only able to assist in court. It's main use so far is to politely argue with customer service staff on your behalf.

For instance, DoNotPay founder Joshua Browder was able to get a refund for a wire transfer fee from Wells Fargo, as seen in a video he shared on Twitter this week.

"Over Christmas, DoNotPay managed to create an AI deepfake clone of my voice," he wrote in the caption. "Then, with GPT, we got the bot to phone up Wells Fargo and successfully overturn some wire fees."

"This is the perfect use case for AI," he added. "Nobody has time to argue on the phone about $12!"

But assisting a defendant in court is an entirely different challenge. A courtroom environment, though, will pose a distinct challenge, especially considering that contemporary language models such as OpenAI's ChatGPT struggle to tell truth from fiction.

"We’re trying to minimize our legal liability," Browder told New Scientist. "And it’s not good if it actually twists facts and is too manipulative."

Browder's goal is to eventually replace some lawyers outright, which could make fighting a speeding ticket a lot cheaper for defendants.

"It’s all about language, and that’s what lawyers charge hundreds or thousands of dollars an hour to do," he told the publication, arguing that "a lot of lawyers are just charging way too much money to copy and paste documents."

But others aren't convinced that will happen any time soon.

"We’re quite far off being able to do these things reliably and get rid of lawyers," Neil Brown at UK law firm decoded.legal told New Scientist. "We have to be very careful of making such claims."

More on AI: In a Fresh Horror, ChatGPT Can Apply to Jobs Now

Read This Next
Naughty Botty
Amazing "Jailbreak" Bypasses ChatGPT's Ethics Safeguards
Immortality Lite
Metaverse CEO Says ChatGPT Is Speeding Up Timeline for Emulating Dead People
Let Them Fight
Whatever You Think of BuzzFeed's AI Quizzes, They're Way Less Horrible Than What CNET Has Been Doing
Bot Wreck
Red Ventures Knew Its AI Lied and Plagiarized, Deployed It at CNET Anyway
Chinese Chatbots
Chinese Company Gearing Up to Release Powerful ChatGPT Competitor
More on Artificial Intelligence
Year of Efficiency
Friday on the byte
Zuckerberg Says Facebook Will Lean Hard Into AI
Facepalm
Friday on the byte
"AI Will Never Replace Journalism," Says Magazine CEO Replacing Journalists With AI
Robot and Sickle
Friday on the byte
OpenAI CEO Says His Tech Is Poised to "Break Capitalism"
READ MORE STORIES ABOUT / Artificial Intelligence
Keep up.
Subscribe to our daily newsletter to keep in touch with the subjects shaping our future.
+Social+Newsletter
TopicsAbout UsContact Us
Copyright ©, Camden Media Inc All Rights Reserved. See our User Agreement, Privacy Policy and Data Use Policy. The material on this site may not be reproduced, distributed, transmitted, cached or otherwise used, except with prior written permission of Futurism. Articles may contain affiliate links which enable us to share in the revenue of any purchases made.
Fonts by Typekit and Monotype.