The Autonomous Rail Rapid Transit system combines the benefits of a train and a bus. 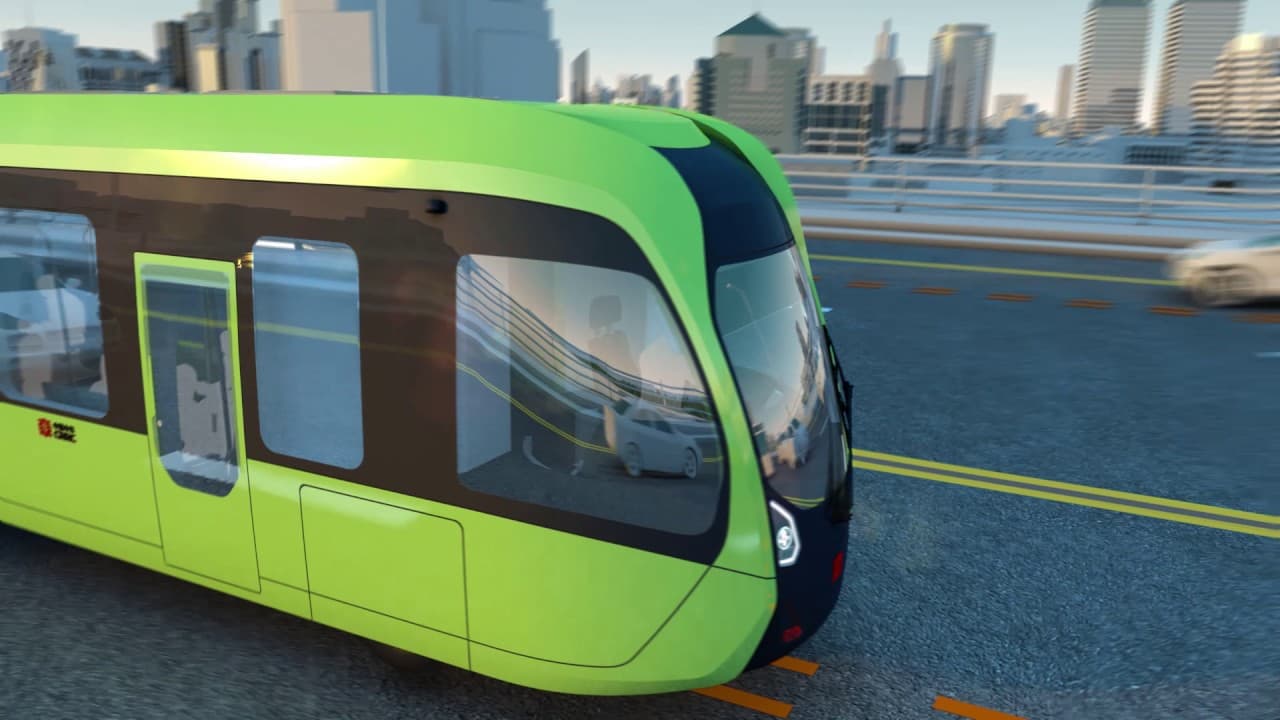 China's CRRC Corporation has started testing a new public transport vehicle that blurs the lines between a train and a bus. Dubbed the Autonomous Rail Rapid Transit (ART) system, it can carry up to 300 passengers across three carriages at speeds of up to 70 kilometers per hour.

ART bears the physical appearance of a train but it doesn't rely on following a track. Instead, it follows a virtual route using an electric powertrain and tires. It's expected to function much like an urban train or a tram, but since there's no investment cost in laying down rails, it should be much cheaper to implement.

This vehicle is also emission free, as it runs on electricity. Currently, its battery packs are only capable of traveling 15 kilometers on a single charge, but they can be fully recharged in just ten minutes using a connection point situated on the top of the carriage.

The concept was first displayed in June 2017, but the system is now being put through its paces on the streets of Zhuzhou in the Hunan Province.

China is pursuing a variety of different avenues in terms of advanced public transport. The country's Aerospace Science and Industry Corporation is reportedly working on a more sophisticated version of the Hyperloop concept, although there's no word on how far into development this initiative is.

One particularly high-profile endeavor was the straddling bus that made headlines in 2016. However, it has since emerged that the project was actually a scam, and its owners were arrested late last year.

Still, the country is very serious about making big changes to the way that residents get around. Authorities are making a great effort to spur the adoption of electric vehicles, which will be aided by the largest Supercharger station in the world, which Tesla opened in Shanghai earlier this month.

It's no secret that pollution is a huge problem in China, with smog proving to have particularly deadly consequences for people living in the region. However, in recent years the government has committed to making big changes in order to improve the situation.

40 percent of China's factories have been shut down, and authorities are reportedly working on a timetable to end the sale of gas- and diesel-powered cars. Alongside the prospect of the ART system being brought to fruition, there are hopes that air quality might continue to be improved in the years to come.

Read This Next
LIDARally
Volvo's New Electric Car Won't Drive if It Detects That You're Drunk
Charged Up
Startup Says Amazing New Battery Lets EVs Drive 400 Miles, Recharge in 15 Minutes
Shots Fired
Ford CEO Mocks Tesla For Rolling Out Half-Finished Autonomous Driving
Poor Comms Team
Volkswagen Says It Lied to Reporters About Name Change
Weather Advisory
It's So Cold, Even Teslas Are Freezing Shut
More on Advanced Transport
Netflix and Drive
Monday on futurism
Mercedes Claims to Have Achieved Level 3 Automation, Beating Tesla
Battery Trouble
Monday on the byte
Tesla "Spontaneously" Bursts Into Flames While Driving Down Freeway
High Tide
Jan 27 on the byte
We’re in Awe of Amsterdam’s Huge Underwater Bike Parking Garage
READ MORE STORIES ABOUT / Advanced Transport
Keep up.
Subscribe to our daily newsletter to keep in touch with the subjects shaping our future.
+Social+Newsletter
TopicsAbout UsContact Us
Copyright ©, Camden Media Inc All Rights Reserved. See our User Agreement, Privacy Policy and Data Use Policy. The material on this site may not be reproduced, distributed, transmitted, cached or otherwise used, except with prior written permission of Futurism. Articles may contain affiliate links which enable us to share in the revenue of any purchases made.
Fonts by Typekit and Monotype.