That Chelyabinsk Meteor Is Still Making Waves in the Scientific Community 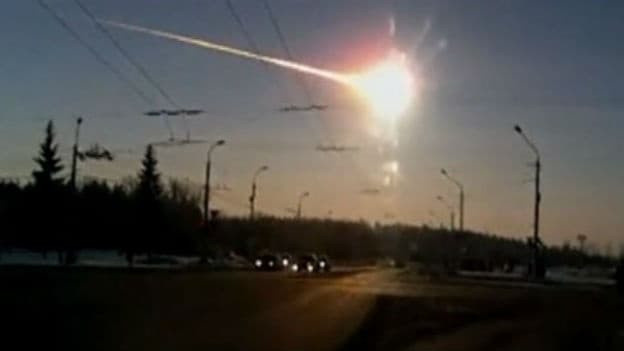 The meteorite that hit the Russian city of Chelyabinsk on Feb. 15, 2013, was the cause of a large number of dynamic ionospheric, atmospheric and seismic phenomena. Oleg Berngardt of the Institute of Solar-Terrestrial Physics in Irkutsk, Russia, presents the properties of ionospheric irregularities elongated with Earth magnetic field during the first 25 minutes after the impact.

The irregularities were observed by the EKB radar of Russian segment of the Super Dual Auroral Radar Network (SuperDARN), an international radar network for studying the upper atmosphere and ionosphere. “It is shown that 40 minutes before meteor fall the EKB radar started to observe powerful scattering from irregularities elongated with the Earth magnetic field in the F-layer.

Scattering was observed for 80 minutes and stopped 40 minutes after the meteorite fall,” Berngardt writes in a paper.

“This allows us to conclude that we detected the growth of small-scale ionospheric irregularities elongated with the Earth magnetic field at E-layer heights,” Berngardt explains. “Joint analysis with the seismic data and numerical modeling shows that the observed effect is connected with the passage of secondary acoustic front formed by supersonic seismic ground wave from the ’Chelyabinsk’ meteorite.”

Significant ionospheric effects during the first 20-25 minutes after the fall at close distances from the explosion site (about 500-700km) were not investigated yet.

Joint analysis with the seismic data and numerical modeling presented in the paper, shows that the observed effect is connected with the passage of secondary acoustic front formed by supersonic seismic ground wave from the ’Chelyabinsk’ meteorite in the presence of a sufficiently high background electric field. The secondary acoustic wave is formed a supersonic seismic ground wave caused by the explosion of a meteorite and its passage.

“As a possible explanation the growth of elongated ionospheric irregularities may be caused by the passage of the high-speed acoustic wave in the ionosphere in the presence of high enough background electric field,” Berngardt concludes. “The mechanism of such gain of field-aligned E-layer ionospheric irregularities at the moment is not clear and requires detailed investigation.”

The Chelyabinsk meteor was a superbolide caused by a near-Earth asteroid that entered Earth's atmosphere over Russia on Feb. 15, 2013 at about 03:20 UTC, with a speed of 40,000 - 42,900 mph. It quickly became a brilliant superbolide meteor over the southern Ural region. The light from the meteor was brighter than the Sun, even at 100 km distance. It was observed over a wide area of the region and in neighbouring republics. Eyewitnesses also felt intense heat from the fireball.Because of its velocity and shallow atmospheric entry angle, the object exploded in an air burst over Chelyabinsk Oblast, at a height of around 29.7 km (18.4 miles, 97,400 feet). The explosion generated a bright flash, producing a hot cloud of dust and gas that penetrated to 26.2 km, and many surviving small fragmentary meteorites, as well as a powerful shock wave.

Its explosion created panic among local residents and about 1,500 people were injured seriously enough to seek medical treatment. All of the injuries were due to indirect effects rather than the meteor itself, mainly from broken glass from windows that were blown in when the shock wave arrived, minutes after the superbolide's flash.