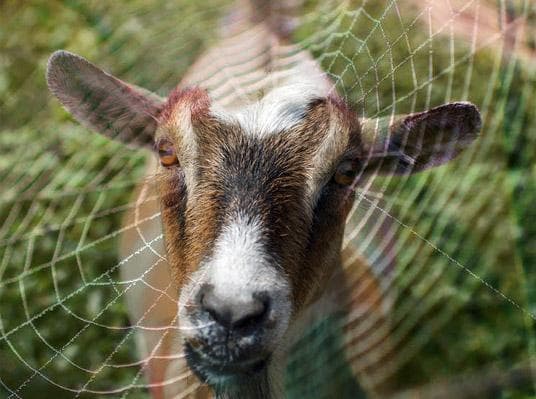 We've shared unsettling science stories in the past. Books bound in human flesh, spooky photographs, and the real human centipede were among the horrors we covered. This Halloween season, we bring you more tales of true and creepy science experiments.

No, not the one from Goat Simulator.

Nexia Biotechnologies began as a company focused on making lactose-free milk. After merging with another company and working on a pharmaceutical product used to treat heart attack and stroke, they decided to go a different route: Inserting a spider's silk-making gene into a goat's embryo.

In theory, the goat's milk would be laden with spider silk protein, which could then be harvested and processed into long threads. The process is actually similar to how a spider produces silk. The proteins are forced through a narrow opening, then stretched. Stretching strengthens the protein by aligning and pressing the crystals in a tight zigzag configuration.

Many scientists hoped to mass produce or mimic spider silk. Some had tried to farm spiders, but the aggressive creatures kill each other when put in such close proximity. Dr. Randy Lewis, of the University of Wyoming was the one who cloned the key proteins from a group of orb weavers.

Lewis does point out that the company is environmentally friendly. They hope to use the silk to make biodegradable fishing line.

Goat + spider = fishing line. Got it?

2. Locating Fear in the Brain

In 2011, researches used a human patient, known only as SM, to study where fear comes from. SM did not feel fear and had lesions on her amygdala, the part of the brain thought to be the key to our experience of fear.

What better way to test this than bring SM to a haunted house? The group of scientists and the subject even watched scary movies together. Still nothing. They came to the conclusion that the amygdala must be the fear center in the brain. Since SM's had lesions, it wasn't functioning.

A couple years later, SM was tested again. This time, they used a different approach. They had SM, along with two other patients who had damaged amygdalae, inhale carbon dioxide. They all had panic attacks. The scientists concluded that more than one part of the brain is responsible for processing fear, and that fear is indeed universal.

3. The Science of Screams

This year, scientists reported that a scream has auditory qualities that no other human vocalization shares. Tecumseh Fitch, an evolutionary biologist and cognitive scientist at the University of Austria, was involved in the work.

A modulation power spectrum was used to chart how quickly the volume of a scream changes over tiny amounts of time. The scientists applied this analysis to both normal speech and screams of terror collected from movies and from volunteers in the lab.

They discovered that the loudness of screams quickly fluctuates by anywhere from 30 to 150 hertz per second. The fluctuations give the sound a roughness that isn't found in any other human speech. A group of volunteers listened to a variety of screams with varying roughness. The scientists discovered that the rougher the sound the more fearful-sounding the volunteers ranked it. The conclusion they came to is that the brain is uniquely tuned to screams. This discovery could lend itself to creating more effective alarms and even better screams in movies.

Typically, dentists focus on teeth. This should go without explanation. However, a Pennsylvania dentist, Lytle Adams, was enamored with bats. During World War II, he proposed to the White House that strapping tiny bombs to bats was a good idea.

Adams hoped to exploit their use of echolocation to help out the war effort. His plan was to bring the bats to Japan, strap bombs to them, and wait for them to roost in a wooden building (most in Japan were wooden at the time). Once the bat found a spot, soldiers would set the building on fire.

"This man is not a nut. It sounds like a perfectly wild idea but is worth looking into," a Presidential memorandum declared.

The White House signed onto what would become known as "Project X-Ray." The Marine Corps captured thousands of Mexican free-tailed bats. Luckily for the creatures, the project was scrapped in 1943. Not so coincidently when progress was made on the atomic bomb.