"This exciting result brings us one step closer to finding an Earth 2.0." 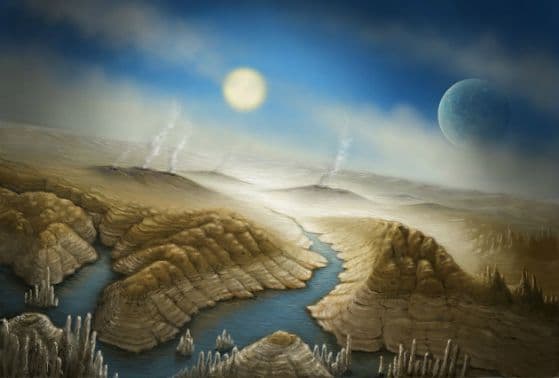 On July 23, 2015, NASA announced the discovery of the first truly Earth-like planet. This find comes thanks to the Kepler Space Telescope, which was launched in March of 2009 and has been planet hunting for the last 5 years.  “It is the first terrestrial planet in the habitable zone around a star very similar to the Sun,” said Douglas Caldwell, an astronomer at the SETI Institute in Mountain View, California, at the time of the find.

It was a moment that would go down in history, serving as a watershed moment for the discovery of Earth-like planets.

Kepler 452 is a Sun-like star that wanders through the cosmos 1,400 light-years from Earth. It has the same surface temperature as our Sun and nearly the exact same energy output. Ultimately, both the Sun and Kepler 452 areG-typee yellow dwarfs. This means that Kepler 452's habitability zone (the area surrounding a star in which liquid water could theoretically exist) is nearly identical to the Sun's.

And if that's not enough, there's a planet that orbits in a path that is nearly identical to Earth's—it falls in almost the exact same place as Earth does in our own solar system.

Since the star is so similar to our own, this means that the length of a year on the planet is nearly identical ours, and the amount of energy that the planet receives is strikingly similar to what Earth gets. The world in question is Kepler 452b. It has an orbit that is 385 days long (amazingly close to our own 365 day year), and it receives just 10% more energy than the Earth does. All of these conditions make habitation possible (if only we could get there).

Notably, Earth and Kepler 452b don't just share orbits—they are twins in a plethora of other ways.

Scientists can't measure the mass of Kepler-452b directly, but inferences based on modeling indicate that the planet is just five times as massive as the Earth (nearly 60% larger). That strongly indicates that this is a rocky world like our own, which is a very good thing (as we really don't have the technology to live on gas giants). Moreover, although five times the mass might seem like an awful lot, scientists estimate that Kepler 452b only has twice the gravity of Earth. Again, this makes habitability possible.

And that's not all. Kepler 452 is slightly older than our own sun. As such, scientists assert that Kepler 452b is a little older than Earth. This means that the planet has been in its star's habitability zone for some 6 billion years. This is longer than Earth has been in the habitability zone of the sun and (obviously) more than enough time for advanced life forms to evolve.

"On the 20th anniversary year of the discovery that proved other Suns host planets, the Kepler exoplanet explorer has discovered a planet and star which most closely resemble the Earth and our Sun," said John Grunsfeld, associate administrator of NASA’s Science Mission Directorate at the agency’s headquarters in Washington. "This exciting result brings us one step closer to finding an Earth 2.0."

And of course, the last sentence is key. We won't know exactly what the conditions are like until we manage to get there. Keep in mind that Mars also falls inside our Sun's habitability zone, and it is a barren, desolate world. However, this find is still amazing, as probability indicates that, if we managed to find one Earth-like world after just a few years of searching, it is likely that there are a plethora more waiting to be found (remember, it is far harder to find smaller planets. Gas giants are much easier to locate).

Indeed, since the discovery of this world almost two years ago, scientists have found dozens of Earth-like worlds. In fact, they found an entire solar system of planets that are similar to our own. And with the James Webb—a telescope that is 100 times more powerful than Hubble—set to launch in 2018...we're really just getting started.

Read This Next
Into Darkness
Inside NASA's Bold Proposal to Probe the Mysteries of Dark Matter
Martian Ammonia
NASA Rover Detects Organic Molecules on the Surface of Mars
Myanus, Hisanus, Heranus...
Here's What Uranus Scientists Think About Your Disgusting Jokes
Joseph Strikes Again
Experts Shred Paper Claiming to Identify Mushrooms on Mars
Mars Shrooms
Extremely Dubious Research Claims to Spot Fungus Growing on Mars
More on Hard Science
Horrible Geese
Dec 4 on futurism
Furious Geese Are Defeating Humans, Scientists Find
Quacks Like a Duck
Dec 1 on futurism
Those Headlines About Scientists Building a Wormhole Are Total Nonsense, People
It From Bit
Nov 22 on the byte
A Scientist Is Crowdfunding an Experiment to Check if We Live in a Simulation
READ MORE STORIES ABOUT / Hard Science
Keep up.
Subscribe to our daily newsletter to keep in touch with the subjects shaping our future.
+Social+Newsletter
TopicsAbout UsContact Us
Copyright ©, Camden Media Inc All Rights Reserved. See our User Agreement, Privacy Policy and Data Use Policy. The material on this site may not be reproduced, distributed, transmitted, cached or otherwise used, except with prior written permission of Futurism. Articles may contain affiliate links which enable us to share in the revenue of any purchases made.
Fonts by Typekit and Monotype.