A computer chip in his brain is even letting him play "Guitar Hero" again. 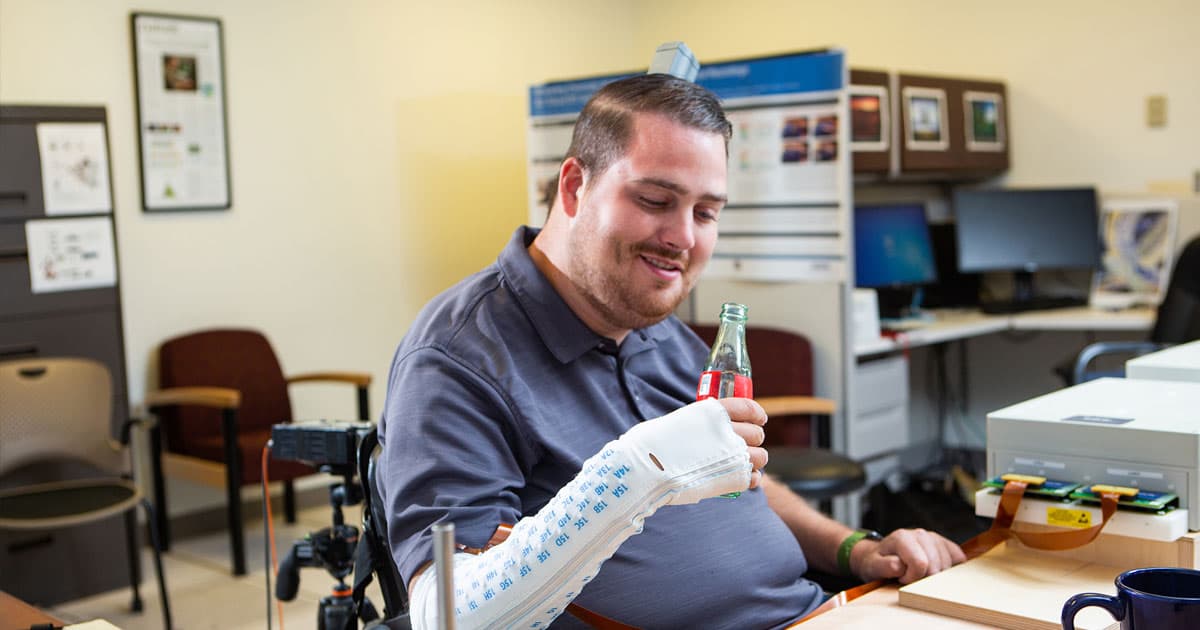 A cutting-edge implant has allowed a man to feel and move his hand again after a spinal cord injury left him partially paralyzed, Wired reports.

According to a press release, it's the first time both motor function and sense of touch have been restored using a brain-computer interface (BCI), as described in a paper published in the journal Cell.

After severing his spinal cord a decade ago, Ian Burkhart had a BCI developed by researchers at Battelle, a private nonprofit specializing in medical tech, implanted in his brain in 2014.

A port in the back of his skull sends signals to a computer. Special software decodes the signals and splits them between signals corresponding to motion and touch respectively. Both of these signals are then sent out to a sleeve of electrodes around Burkhart's forearm.

But making sense of these signals is extremely difficult.

"We’re separating thoughts that are occurring almost simultaneously and are related to movements and sub-perceptual touch, which is a big challenge,” lead researcher at Battelle Patrick Ganzer told Wired.

The team saw some early successes regarding movement — the initial goal of the BCI — allowing Burkhart to press buttons along the neck of a "Guitar Hero" controller.

But returning touch to his hand was a much more daunting task. By using a simple vibration device or "wearable haptic system," Burkhart was able to tell if he was touching an object or not without seeing it.

"It’s definitely strange," Burkhart told Wired. "It’s still not normal, but it’s definitely much better than not having any sensory information going back to my body."

Read This Next
Personality Construct
Gaming CEO: Brain Interfaces Will Allow Us to Edit Our Feelings
Futurism
Build A Better Brain With This Memory Mastery Course
Brain Switch
Scientists Gave Ketamine to Sheep and Were Baffled by the Result
Facebook Mind Reader
Facebook is Making Progress on Its Mind Reading Headset
Neuralink
Elon Musk: Brain-Computer Interface Update "Coming Soon"
More on Sci-Fi Visions
What is Happening
Wednesday on the byte
Elon Musk Sets His Twitter Account to Private
From the Dept. of...
Monday on futurism
The Best Humidifiers of 2023
Human v. Giraffe
Jan 24 on the byte
Chaotic Italian Fashion Line Baffles Facial Recognition Software
READ MORE STORIES ABOUT / Sci-Fi Visions
Keep up.
Subscribe to our daily newsletter to keep in touch with the subjects shaping our future.
+Social+Newsletter
TopicsAbout UsContact Us
Copyright ©, Camden Media Inc All Rights Reserved. See our User Agreement, Privacy Policy and Data Use Policy. The material on this site may not be reproduced, distributed, transmitted, cached or otherwise used, except with prior written permission of Futurism. Articles may contain affiliate links which enable us to share in the revenue of any purchases made.
Fonts by Typekit and Monotype.