"And it is not beyond the realm of possibility that they say, ‘Keep out, we’re here, this is our territory.'" 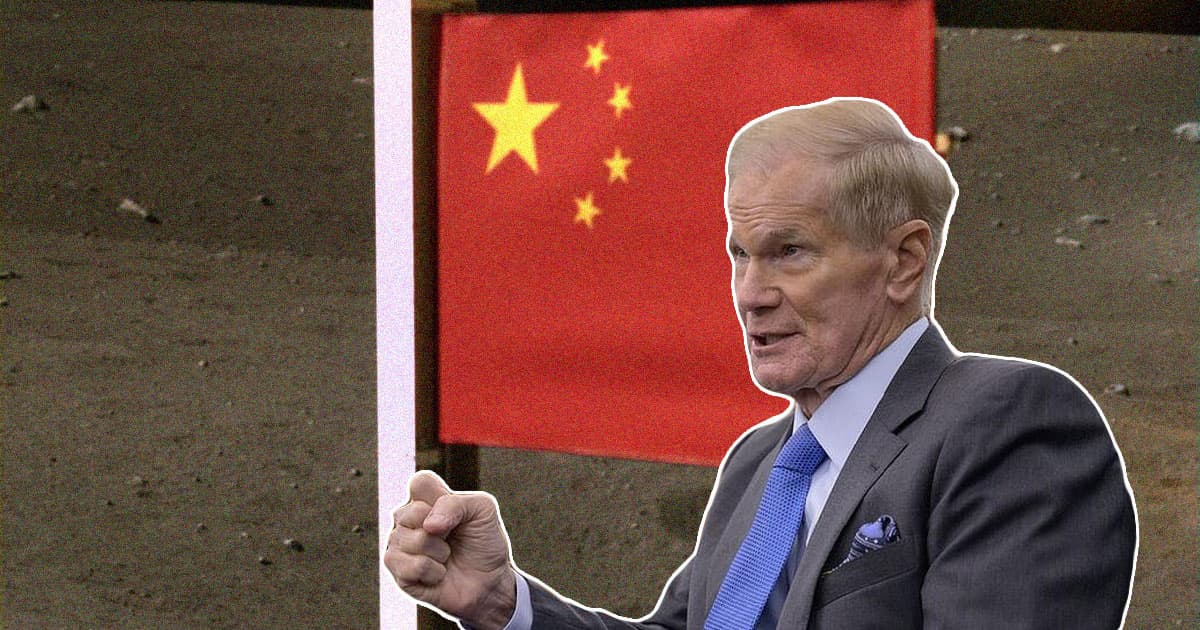 NASA administrator and former astronaut Bill Nelson is afraid that China may get to the Moon before his agency — and that while there, it may even claim portions of the surface as its own territory.

"It is a fact: we’re in a space race," Nelson told Politico in an explosive new interview. "And it is true that we better watch out that they don’t get to a place on the Moon under the guise of scientific research."

"And it is not beyond the realm of possibility that they say, ‘Keep out, we’re here, this is our territory,'" he said, pointing to disputed territory China has claimed here on Earth. There are locations on the Moon that are sufficient for "harvesting water and so forth," he added, saying that "the good Lord willing" NASA could still beat China in sending astronauts back to the Moon.

His remarks highlight NASA's commitment to returning the first astronauts to the lunar surface in over half a century, a complex and ambitious series of missions that could culminate in the first landing as early as 2025 if everything goes according to plan.

But they also cast a dark light on China's space ambitions, when in reality there's little evidence that the country is planning a lunar land grab.

Besides, maintaining a permanent presence on the Moon isn't only astronomically expensive. It's also unclear whether resources on the Moon could ever be valuable enough to provide anything other than political bragging rights.

Nelson's concerns aren't entirely unfounded, however. China is indeed pouring unprecedented resources into landing astronauts on the Moon and even Mars.

The country has made its own significant strides in exploring the Earth's orbit and beyond, including the establishment of a brand-new space station as well as several successful robotic landings on the Moon and Mars.

Even if those landers and space station are very similar to NASA's activities in space, those rapid advancements clearly have US officials spooked.

"It’s entirely possible they could catch up and surpass us, absolutely," Space Force general Nina Armagno said  last month, as quoted by Reuters. "The progress they’ve made has been stunning — stunningly fast."

"There is potentially mischief China can do on the Moon," retired Air Force colonel and former International Space Station commander Terry Virts told Politico. "If they set up infrastructure there they could potentially deny communications, for example."

But not everybody agrees that China is hellbent on doing mischief once it gets to the lunar surface.

In response to the comments, a spokesperson for the Chinese Embassy in Washington told the outlet that "China firmly rejects such remarks" and that their comments were "spoken irresponsibly to misrepresent the normal and legitimate space endeavors of China."

"Outer space is not a wrestling ground," the spokesperson added. "The exploration and peaceful uses of outer space is humanity’s common endeavor and should benefit all."

Read This Next
Shoo
Scientists Warn Giant Asteroid Is Actually Swarm, Nearly Impossible to Destroy
A Sip of Opal
NASA Discovers Precious Gemstones on Mars
And He Scores
We Are Completely Puzzled by This Video of a Chinese Astronaut Playing Ping-Pong in Space
Shot Well
Head of NASA Relieved to Hear Elon Musk Isn't REALLY Running SpaceX
Little Boxes
One Silly Little Detail Is Reportedly Delaying Artemis II by Years
More on Off World
No More Hops, Mor...
Yesterday on the byte
Suggestion: NASA Should Make Its Mars Helicopter Do Some Gnarly Tricks From "Tony Hawk"
Exoplanet Dance
Tuesday on the byte
Scientist Releases Amazing Video of Exoplanets Orbiting Distant Star
Space Junk News
Tuesday on the byte
Two Large Chunks of Space Debris Just Almost Collided in an Epic Disaster
READ MORE STORIES ABOUT / Off World
Keep up.
Subscribe to our daily newsletter to keep in touch with the subjects shaping our future.
+Social+Newsletter
TopicsAbout UsContact Us
Copyright ©, Camden Media Inc All Rights Reserved. See our User Agreement, Privacy Policy and Data Use Policy. The material on this site may not be reproduced, distributed, transmitted, cached or otherwise used, except with prior written permission of Futurism. Articles may contain affiliate links which enable us to share in the revenue of any purchases made.
Fonts by Typekit and Monotype.