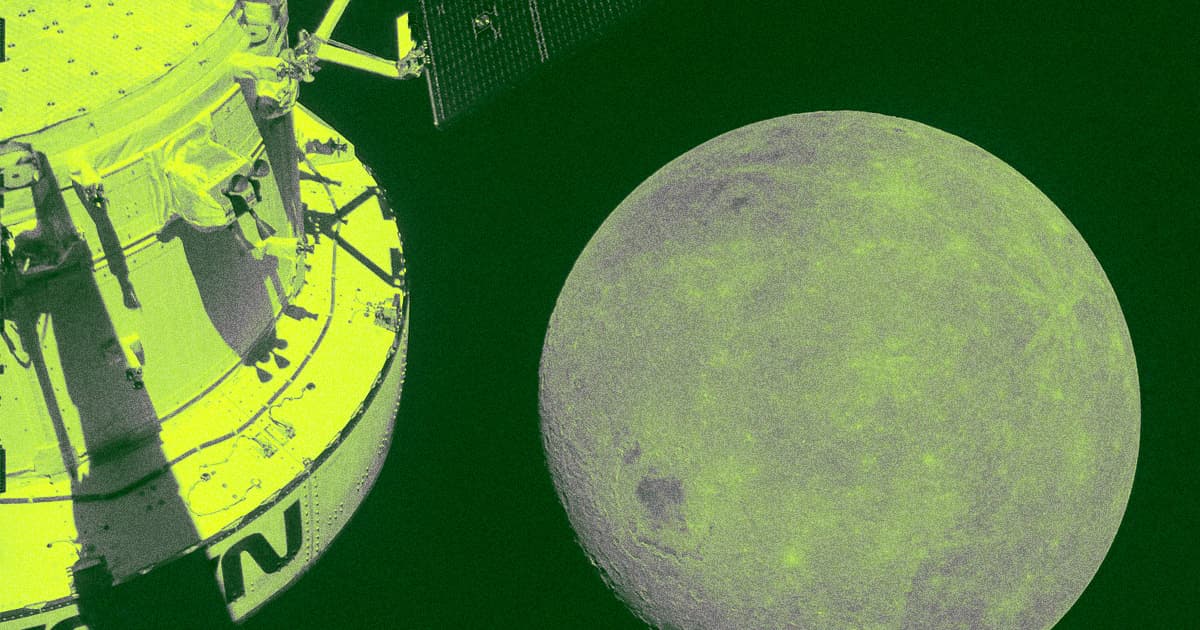 With Artemis on its way back on to Earth, a question looms: why is it not headed back out, with astronauts on board, for at least two more years?

In an interviews with Ars Technica, NASA insiders explained that ultimately, the lengthy gap between Artemis I and II boils down to money, and the financial issues began with a $100 million budget hole eight years ago that contractor Lockheed Martin ultimately filled with some flight computers, thus putting into effect a series of unfortunate events that led us to the dismal delay.

The decision, made eight years ago when Orion and the Space Launch System (SLS) megarocket were still vaguely slated for a "journey to Mars," the SLS was only going to launch once, and the whole mission was slated to take off in 2017.

That initial single-use SLS — known then as "Block 1" — has been an enduring pain in NASA's rear. Its second proposed iteration, "Block 2," would need an upgraded mobile launch tower that would take three years and lots of additional money to build. Looking to close the budget gap, Orion's planners decided to make the capsule's flight computers reusable.

Known as "avionics boxes," these small flight computers act as the "brains" of the Orion capsule. Sure, the salvaged boxes would take two years to re-certify, but that was an acceptable timeline back then. As former Orion project manager Mark Kirasich told Ars, it was "simply a budget decision."

But then the delays started.

Known back then as "Exploration Mission-1," the project that included the SLS and Orion had already begun facing political pressure to tighten the gap between an initial mission launch and its sequel because it would, as officials noted at the time, require those trained on the mission to "relearn their jobs."

In response, NASA officials decided that they should go ahead and build the mobile launch tower that could be used with the "Block 1" SLS more than once. They hired Bechtel, an engineering firm, to complete the task for which $383 million was allocated — a decision that ultimately proved disastrous as the company took way too long to build that second launch tower.

While the second launch tower remains in contractor limbo, the first one — which NASA used to launch Artemis last month — is already built and can be used repeatedly as long as the damage done to it is repaired.

That's now the plan, but because of the decision way back when to salvage those avionics boxes, the agency is now beholden to do so, a process which is likely going to take two years per IG Martin's annual report for 2022 because the salvaging process is extremely detailed and time-consuming, requiring the computers to be pulled from the capsule post-landing, re-certified, and then re-installed into Orion as it prepares to take humans to the Moon for the first time in 50 years during the Artemis II mission.

When Ars asked Howard Hu, Orion's current project manager, if those diminutive recycled computers would indeed be ready for the December 2024 launch that NASA has optimistically put on the books, he responded diplomatically.

"I would say that we’re going to try our best to get there," Hu told the site. "We’ve got hardware that we’ve got to pull, and then we’ve got to evaluate where we are on the flow, and on the schedule."

"We’ve got lots of remaining work," he added — an understatement if we've ever heard one.

This winding tale is the platonic ideal of contractors and government agencies butting heads — and when you throw in the safety measures necessary to keep living astronauts safe in space, it makes the whole thing all the more mindboggling.

And at the end of it all, Artemis II is just orbiting astronauts around the Moon, not actually landing them on the surface. That feat's reserved for Artemis III, which won't launch until 2025 at the absolute earliest.

More on Artemis: NASA Orders Press Not to Photograph Launch Site After Moon Mission Takes Off

Read This Next
Shoo
Scientists Warn Giant Asteroid Is Actually Swarm, Nearly Impossible to Destroy
A Sip of Opal
NASA Discovers Precious Gemstones on Mars
Moon Wrestling
The Head of NASA Is Scared Chinese Astronauts Will Seize Portions of the Moon
Shot Well
Head of NASA Relieved to Hear Elon Musk Isn't REALLY Running SpaceX
Putting Things In Perspective
Amazing Artemis Photo Shows Every Human, Alive or Dead, Plus the Moon
More on Off World
No More Hops, Mor...
Yesterday on the byte
Suggestion: NASA Should Make Its Mars Helicopter Do Some Gnarly Tricks From "Tony Hawk"
Exoplanet Dance
Tuesday on the byte
Scientist Releases Amazing Video of Exoplanets Orbiting Distant Star
Space Junk News
Tuesday on the byte
Two Large Chunks of Space Debris Just Almost Collided in an Epic Disaster
READ MORE STORIES ABOUT / Off World
Keep up.
Subscribe to our daily newsletter to keep in touch with the subjects shaping our future.
+Social+Newsletter
TopicsAbout UsContact Us
Copyright ©, Camden Media Inc All Rights Reserved. See our User Agreement, Privacy Policy and Data Use Policy. The material on this site may not be reproduced, distributed, transmitted, cached or otherwise used, except with prior written permission of Futurism. Articles may contain affiliate links which enable us to share in the revenue of any purchases made.
Fonts by Typekit and Monotype.