It was about 500 times as bright as a normal star explosion. 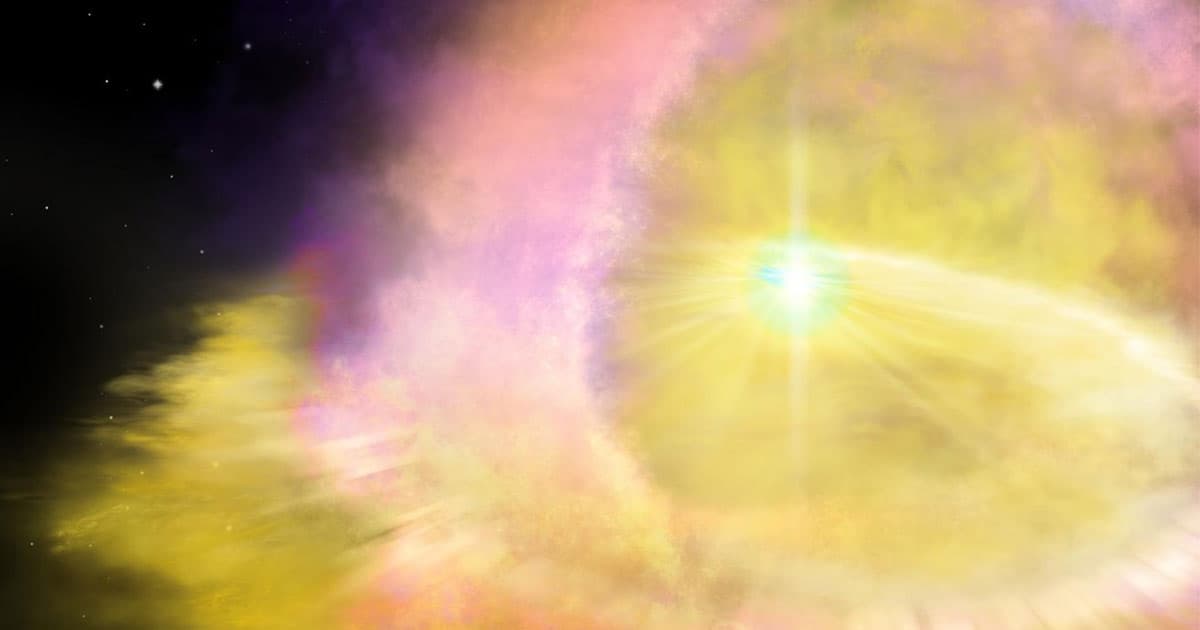 A team of astronomers have spotted the brightest supernova ever recorded — a gigantic explosion that obliterated a star at least five times the mass of the Sun, in a galaxy 3.6 billion light-years from Earth.

The team, a collaboration between the Smithsonian Astrophysical Observatory and the Harvard College Observatory, suggests that the supernova was the aftermath of two massive stars merging — resulting in ten times the explosive energy of the average supernova.

"SN2016aps is spectacular in several ways," said Edo Berger, Harvard University professor and co-author on the paper published in the journal Nature Astronomy today, in a statement. "Not only is it brighter than any other supernova we’ve ever seen, but it has several properties and features that make it rare in comparison to other explosions of stars in the universe."

The proportion of explosion energy emitted through visible light was extremely high, making it 500 times brighter than a regular supernova.

"In a typical supernova, the radiation is less than 1 per cent of the total energy," Matt Nicholl, of the University of Birmingham and lead author of the study. "But in SN2016aps, we found the radiation was five times the explosion energy of a normal-sized supernova. This is the most light we have ever seen emitted by a supernova."

"We determined that in the final years before it exploded, the star shed a massive shell of gas as it violently pulsated," said Nicholl. "The collision of the explosion debris with this massive shell led to the incredible brightness of the supernova. It essentially added fuel to the fire."

The astronomers came to the conclusion that the supernova was likely the result of two stars merging by detecting high levels of hydrogen gas. Massive stars tend to shed most of their hydrogen gas before turning into a pulsating red giant. Smaller ones, on the other hand, "hold onto their hydrogen for longer," according to Berger.

"Finding this extraordinary supernova couldn't have come at a better time," Berger said. "Now that we know such energetic explosions occur in nature, NASA's new James Webb Space Telescope will be able to see similar events so far away that we can look back in time to the deaths of the very first stars in the Universe."

"The identification of SN2016aps has opened pathways to identifying similar events from the first generations of stars," concluded Berger.

More on supernovae: This Is the Most Brutal Supernova in Recorded History

Read This Next
zombie star
Scientists Puzzled by Star That Exploded in Supernova But Somehow Survived
Into Darkness
Inside NASA's Bold Proposal to Probe the Mysteries of Dark Matter
Martian Ammonia
NASA Rover Detects Organic Molecules on the Surface of Mars
Myanus, Hisanus, Heranus...
Here's What Uranus Scientists Think About Your Disgusting Jokes
Joseph Strikes Again
Experts Shred Paper Claiming to Identify Mushrooms on Mars
More on Hard Science
Past Particle
Yesterday on the byte
Large Hadron Collider Discovers Strange New Particles
Moved to Tears
Jun 30 on the byte
Scientists Say New James Webb Images Are So Powerful That It Was Emotional Just Looking at Them
Good God
Jun 28 on the byte
Huge Cloud of Toxic Yellow Gas Kills 13
READ MORE STORIES ABOUT / Hard Science
Keep up.
Subscribe to our daily newsletter to keep in touch with the subjects shaping our future.
+Social+Newsletter
TopicsAbout UsContact Us
Copyright ©, Camden Media Inc All Rights Reserved. See our User Agreement, Privacy Policy and Data Use Policy. The material on this site may not be reproduced, distributed, transmitted, cached or otherwise used, except with prior written permission of Futurism. Fonts by Typekit and Monotype.