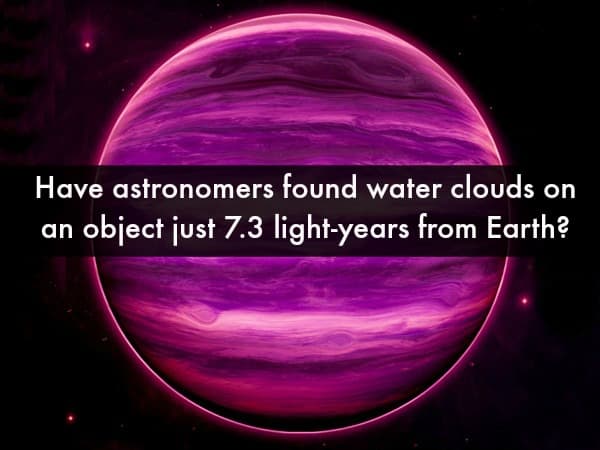 Life, as we've seen, is an extraordinarily rare thing. So rare, in fact, that out of the thousands of exoplanets we've found, not a single one of them could indisputably host our kind of life. However, the prerequisites are kind of simple on the surface. Carbon-based lifeforms clearly demand carbon and the presence of liquid water as well, yet, for something so incredibly prevalent on Earth, water is a scarce resource out in the cosmos. In fact, only a small number of planets have trace amounts of it at all.

If a new discovery is confirmed, it would be one heck of an important milestone for astronomers. The world this find revolves around, called WISE J0855-0714, is situated approximately 7.3 light-years from Earth (within spitting distance, cosmologically speaking, of course). It's not your average, run-of-the-mill planet, but a brown dwarf (or a "failed star"). These heavy weights are too massive to qualify as planets, but not massive enough to collapse under their own gravity, or sustain nuclear fusion within the core.

Oddly enough, our brown dwarf isn't a new discovery per se, but one that was dug out of the archives of NASA’s Wide-field Infrared Survey Telescope (known as 'WISE' for short). You might remember it as the "star" about ten times more massive than Jupiter that's so cold, it's not only the coldest star ever found, it's a smidge colder than ice.

An Oasis in a Cosmic Desert?

Reports have emerged that astronomers could have detected water within the tumultuous clouds of this neighboring brown dwarf's atmosphere, which is a first. The find was made using the 6.5-meter Magellan Baade telescope located in Chile. Jacqueline Faherty — an astronomer from the Carnegie Institution for Science in Washington, D.C —  gathered over 151 images of the lone star at near-infrared wavelengths. Then, she compared those images to atmospheric models that deal with the inner-workings of brown dwarfs, specifically looking at the radiation they emit, which ultimately brought up the tantalizing possibility that this object might harbor a decent concentration of water.

“It’s incredibly interesting,” said Jonathan Fortney of the University of California, Santa Cruz, an astronomer who played a crucial role in the development of the brown dwarf models used by Faherty. “It’s tentative,” he clarified in an interview with Science News, “but it’s the first evidence for water clouds outside our solar system."

Now, it's important to make the distinction that  we HAVE found water before in the atmosphere of a planet beyond our local neighborhood, but not water in the normal sense. Rather, we've found exoplanets with water vapor (another planet has water in plasma form). This time, the water lies within the clouds themselves. Fortney asserts that the clouds might even be situated in the atmosphere in a manner similar to Earth, with mostly clear skies and patches of clouds scattered throughout.

What the Future Holds:

As sophisticated as current telescopes are, they still aren't powerful enough to acquire a closer look at the spectra of WISE J0855-0714 to confirm the tentative findings, but we CAN be certain about one thing.. and that one thing is that WISE J0855-0714 isn't remotely habitable, even if it does have water.  Not only is it mostly a big ball of gas, with pressures strong enough to kill a human, but its weather patterns would also make Jupiter's Great Red Spot seem like an idea vacation destination.

By mapping the variations in the faint light such objects emit (most of it can only be seen in the infrared portion of the electromagnetic spectrum), we've been able to deduce that, on some brown dwarfs, there might be "rain" composed of sand and salts, perhaps even molten iron (add some lightning to the equation and you get Dante's 9th circle of hell).  Traditional rain is pretty much out of the question though. Given how hot the temperatures would be (generally speaking, not in the case of THIS particular dwarf star) in most upper atmospheres, water-based weather is rendered implausible, if not entirely impossible.

In 2018, Hubble's successor, the James Webb Telescope, is set to take to the skies. Being that it will be the most powerful telescope ever hoisted into space, it could help shed further light on this object.

The research has been published in the Astrophysical Journal Letters.