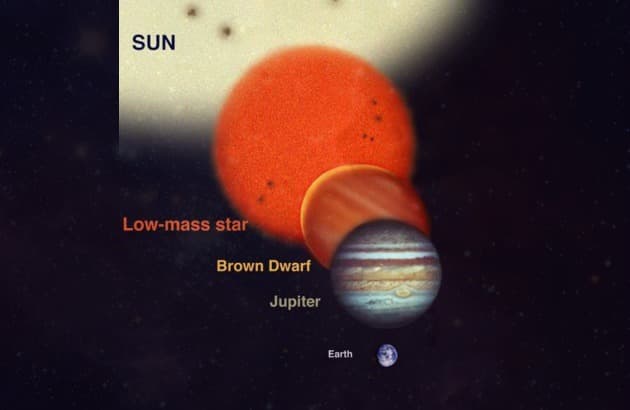 There are a number of different classifications for celestial objects. There are planets, dwarf planets, and planetoids. There are hypergiant stars, stars, and white dwarfs. The list goes on and on. Ultimately, these classifications allow scientists (mostly astronomers) to talk about these various objects in meaningful ways. However, it can leave you rather confused. So let's take a moment to sort out at least one classification.

First, let’s start on brown dwarfs. These cosmic quandaries were not even discovered until 1995 (that's just 20 years ago). To make a brown dwarf, you need to start making a star (a protostar). Stars generally form when a nebula of dust and gas is, for some reason, disturbed and begins to condense. Once it has condensed, it forms an object massive enough to ignite nuclear fusion.

Brown dwarfs are what you get when this process fails—when the protostar does not obtain enough mass of hydrogen to sustain the nuclear fusion.

Ultimately, stars are formed because, in essence, the the more matter there is, there more it gathers together because of gravity. The more matter gathers together, the more compressed it gets. And notably, gas heats when it's compressed. The heat excites the atoms and moves them more and more violently, which causes even more friction and thus more heat (it is a kind of runaway event).

How hot does the protostar need to be to sustain nuclear fusion?

About 10,000,000° Celsius, which is about the same  18,000,000° Fahrenheit. How much mass do you need to get to that temperature? Somewhere between 75 and 80 times the mass of Jupiter. And that's what's needed to make the smallest and coolest of stars. Any star that's bigger, hotter, and brighter requires a lot more matter.

This is where brown dwarfs failed. For some reason, there was not enough matter in the area, and the protostar never ignited. As such, it stayed as a ball of gas.

Brown dwarfs and gas giants like Jupiter are remarkably similar. The major difference is temperature. Brown dwarfs can have temperatures as high as 2000° C (3600°F), or as cold as the one that was discovered about 2 years ago at 350°C (662°F), and there was even one discovered very recently that is 30°C (86°F), which is a rather warm but livable room temperature.

So it can be a bit colder still.

Jupiter and Saturn are both about -100°C at surface level. I say surface level, but I want to clarify that those planets have no actual “surface” in the traditional sense. A "surface" is when the atmospheric pressure equals 1 atmosphere (the pressure at Earth’s surface at sea level). These temperature differences cause the material in both objects to act differently. For instance, water remains in a gas form in brown dwarfs, while it freezes in gas giants.

One more major difference between brown dwarfs and gas giants is that gas giants started out as rocky structures that gathered random gasses and dust in the planetary disk formed after a star ignites. So there is a molten rocky core (or icy core in the case of ice giants like Neptune and Uranus) in the center of gas giants, while brown dwarfs are all gas.