Astronomers Find a Galaxy With a Triple Black Hole System 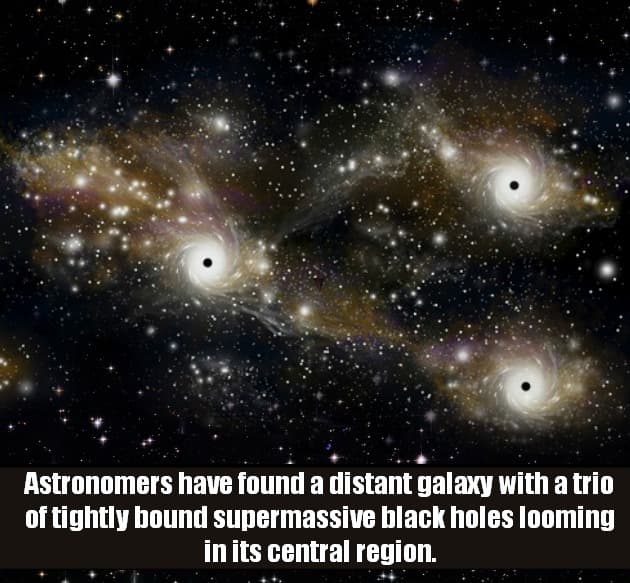 Astronomers have long known that at the center of most large galaxies, black holes that weigh more than one million — sometimes a billion — Suns loom. Over the years, we've looked into the role these behemoth black holes might play in galaxy evolution, while also using them to get insight into the environment surrounding such strange beasts. Yet each time we think our understanding of them reflects observations (and aligns with theoretical predictions), we unravel a new layer, showing us we are still far away from having a complete picture of their characteristics.

The most recent news comes to us in the form of a distant galaxy situated more than 4 billion light-years from Earth. Last week, astronomers announced that the galaxy hosts not one solitary supermassive black hole, but three. This triple black hole system is merely one of four examples ever found.

The Inner Workings of The Triple Black Hole System:

If you expect the central region of this galaxy to be utterly chaotic, you would only be half right. Two of the black holes in the system orbit each other from a distance of about 450 light-years. The third can be found even farther out from the primary pair (they complete an orbit around each other so quickly, they exceed the speed of sound 300 times over). The distance might seem extreme. I mean, after all, 450 light-years is pretty vast, even in cosmological terms; one light-year alone is equivalent to 5.88 trillion miles (9.5 trillion kilometers). Well, the black holes inhabiting this galaxy are now within the top two tightest trio ever found (and the tightest trio ever found so far from our galaxy).

With the other systems used as a starting point, astronomers have faced difficulty determining how many black holes are packed into a tight space (oftentimes, they tend to be so close, they are almost indistinguishable from one black hole). This one was a bit more simplistic since the researchers found that the primary pair leave a corkscrew-like patterns in the large jets of radio waves they emit. These helical-looking jets might even serve as a cosmic blueprint for finding tight binary black hole systems without the services of super high-resolution telescopic equipment (namely the European VLBI Network).

There's good news for the third wheel too. Over the course of the next few millions of years, gravity will draw all three black holes together, until they inevitably merge to form a "super" supermassive black hole (yes, I just  made that up, it still won't come anywhere near an ultramassive black hole though).

Earlier this year, a team of researchers published a paper that revealed something extremely spectacular (one of the most important discoveries since the Higgs Boson was finally found, for sure): the first solid evidence of the long-sought after gravitational waves; a phenomenon first predicted by Einstein almost 100 years ago. The bad news is that many physicists in the field have went on to cast doubt on the team's findings, saying that the researchers didn't take the necessary measurements to make sure noise — in this case, galactic dust — didn't cloud their results.

The data itself was derived from the cosmic microwave background radiation (CMB), a map of some sorts, popping up less than half a million years after the universe's formation, that charts the first moments after the big bang (some 13.7 billion years ago). When looking at the polarization patterns within the big bang afterglow, the researchers noted what looked to be faint twisting patterns that might point to primordial gravitational waves: waves that originated a trillionth of a trillionth of a trillionth of a second after the proverbial lights flipped on around here.

While their assertion was exciting in and of itself, it was merely one piece to a much larger puzzle, one that finally gave credence to the inflationary model of the big bang. It says that shortly after the universe came into being, it expanded exponentially in size in a short period of time. It has continued expanding since, but at a much slower rate.

Only two separate teams published papers about how galactic dust can have a similar scattering effect on the CMB. According to one of the authors — Uroš Seljak, an astrophysicist at the University of California, Berkeley — “Based on what we know right now… we have no evidence for or against gravitational waves."

Gravitational waves, simply put, are ripples in the fabric of spacetime. For spacetime to get all bent out of shape, some kind of a cosmic disturbance must take root.. a colossal merger of not two, but three supermassive black holes might do the trick. The odds of detecting these ripples as they propagate like waves in a pond are vastly improved by the fact that we have a good place to look. You know, if we had 4 billion years (and some change) to wait and watch the merger play out.

Even though we don't, the system is very interesting from a "proof of concept" perspective. We might even find similar trios much closer to home that are already in the process of merging. As Roger Deane — the head researcher —put it, these systems are likely "far more common than previous observations have found."

Moreover, "The twisted radio jets associated with close pairs may be a very efficient way to find more of these systems that are even closer together," Deane said.

If you enjoyed this article, learn why one team of researchers believe some of these supermassive black holes might be wormholes. Or, learn all about one alternative to black holes, the gravastar.