This Might Be the Weirdest-Looking Rocket We've Ever Seen

"This is possibly the dumbest space thing I've ever seen..." 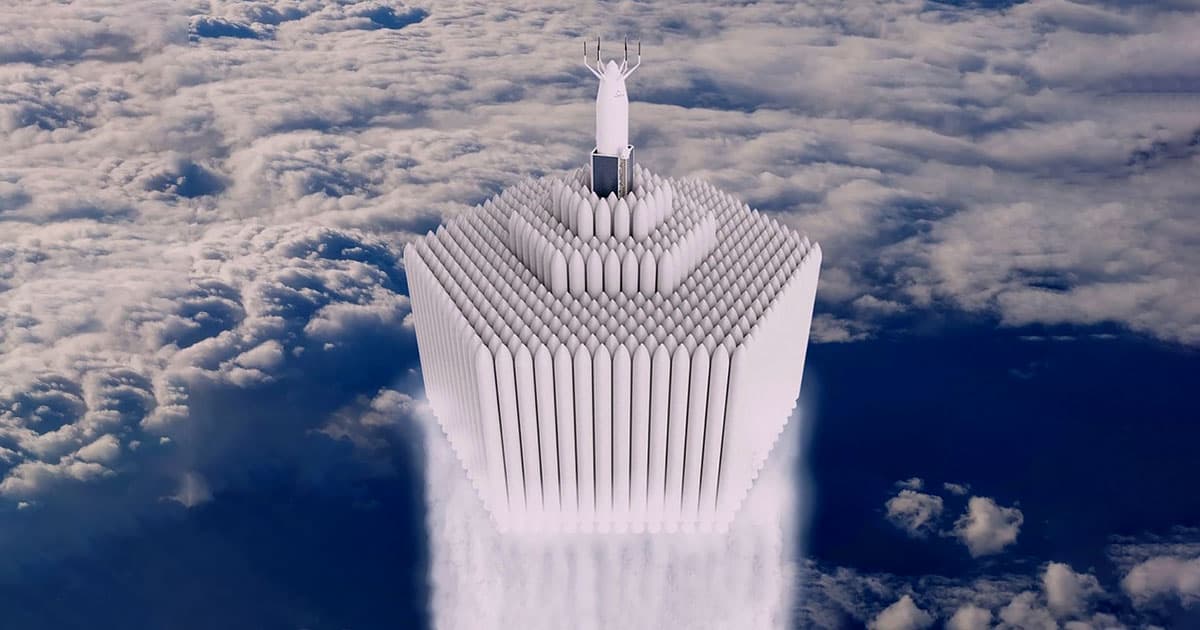 Earlier this month, a Romanian rocket startup called ARCA Space showed off one of the strangest rocket designs we've ever seen. Adding to the general sense of eccentricity hovering over the project, it says the venture will be funded by selling crypto tokens that can later be exchanged for ore that — we're serious, this is the pitch — it'll obtain via asteroid mining.

We should emphasize that the concept, dubbed the EcoRocket Heavy, looks extremely peculiar. It's powered by steam and stuffed to the gills with boosters, making it technically wider than it is tall, which gives the impression of a large, lumpy wedding cake, or possibly an art deco skyscraper (in ARCA's vision, an attached spacecraft dubbed the AMi Cargo will take care of the asteroid mining).

In short, it looks like something you'd see dreamed up by a teenager on Kerbal Space Program.

In the space community, the response was swift and brutal.

"ARCA Space just revealed the updated concept for EcoRocket Heavy and I'll certainly be having nightmares about it for months," another user noted.

We were curious how ARCA Space founder Dumitru Popescu felt about that type of feedback. But in an interview, he remained steadfast.

"Each time you propose an innovative design, you should definitely expect people's reaction to be, let's say reserved," he told Futurism.

"I mean, if you if you see a car with five wheels, your reaction will not be necessarily positive," he added.

ARCA does have at least a little bit of experience. It's successfully launched two partially reusable and steam-powered rockets into the stratosphere so far — albeit a far shot from orbit.

It's also worth noting that it was awarded a contract by the European Space Agency to develop a parachute system for the agency's ExoMars spacecraft. The spacecraft didn't make it, however, and crashed on the Martian surface in 2016, with ARCA taking some of the heat.

The company has an extremely colorful history. In 2015, for instance, it racked up headlines for a battery-powered hoverboard that never appears to have materialized.

Other adventures have been less lighthearted. Popescu was arrested and jailed in New Mexico back in 2017 on 13 counts of fraud, five counts of embezzlement, and one count of forgery.

In a 2018 video posted to Facebook, Popescu claimed the arrest was the result of his second ex-wife and a former ARCA board director who had colluded against him. Prosecutors later dropped the charges against him — although not before Popescu fired his attorney and represented himself in court.

The company even alluded to the arrest in a new white paper about the asteroid mining plans, writing that the story "sounds pretty unbelievable, but unfortunately it is true" in an eyebrow-raising footnote.

In the same footnote, Popescu went as far as to say that his time incarcerated was "one of the best things that ever happened to me," because it gave him "time to think and focus on how I'm going to restart ARCA," with "only $300."

His arrest, despite "being very difficult" for him, "was also a good experience," because it made him reevaluate his approach to rocketry, Popescu told Futurism.

As laid out in the white paper, ARCA's EcoRocket Heavy would be made up of a dizzying number of "Propulsion Modules" — 540 total, spread out across several levels — that, once put together, form an awkward stack that's much wider at the bottom than the top.

That means the rocket is girthy as hell, measuring some 113 feet across at the base, which is an ungainly four times the width of SpaceX's Starship.

The rationale behind this strange design? It'll save money that would otherwise be spent on a large crane.

"Of course, the taller the rocket, the larger the crane," the white paper reads. "And when we looked at Starship/Super Heavy that is using these insanely tall cranes, it was clear for us that this must be avoided by all means, because the rental or manufacturing of those cranes is seriously expensive."

"It absolutely is a unique design, which came from some constraints," Popescu told Futurism, noting that working on a single body requires "a lot of supporting equipment."

Popescu also said that "we are not actually the first to propose this idea," pointing to German rocket maker OTRAG. That company, which went defunct in 1987, similarly suggested using mass-produced units spread out across several stages to launch heavy payloads into orbit in the 1970s.

The idea was tested at several German and African test sites, with rockets reaching suborbital altitudes on at least 14 occasions before the company shut down.

Popescu also said that simulations showed the extremely wide structure of the EcoRocket Heavy had a surprisingly low drag penalty.

But as YouTuber and rocket scientist Scott Manley explained in a 2020 video about OTRAG, the German company's designs "always seemed to come out below what was required," adding that there were some substantial "technical challenges."

For instance, "clustering all these units together would be a slow task because they would have to get them perfectly aligned if there was any skew any twists they would pick up roll."

Both OTRAG and ARCA Space aimed to greatly reduce the amount of money it cost to launch payloads into orbit. But ARCA took the idea even further, focusing its efforts on using water — a resource that's orders of magnitude cheaper than liquid or solid rocket propellants — as a way to get its giant rocket off the ground.

To that end, the EcoRocket's name suggests that it was designed with the environment in mind, but Popescu said that wasn't the original intent.

"Actually, I need to admit that the first drive for us to build the EcoRocket was not actually the pursuit of the ecological aspect," Popescu told Futurism, adding that it was actually "cost reduction."

The EcoRocket Heavy's first two stages use steam from heated water to create thrust — which has turned out to be a bit of a headache for ARCA.

The team quickly noticed that steam performed significantly worse than other "polluting or toxic propellants," according to Popescu.

"And at some point, honestly, we were thinking, 'Okay, this is not going anywhere,'" he said. "'This is a dumb idea.'"

That's when the team decided to have only the upper stages use polluting fuels — a hydrogen peroxide mix that includes kerosene — to give payloads the extra lift they need to enter orbit once past the atmosphere.

Besides, in Popescu's thinking, once the rocket blasts past the stratosphere, who cares about expelling pollutants into outer space?

In short, the EcoRocket is a gargantuan construction made up of hundreds of hot water tanks — a comparison Popescu agreed was accurate enough — with a couple of traditional rocket stages mixed in.

"We traded basically the performance for cost reduction and environment protection," Popescu told Futurism, something the company sees as "a fair trade."

Tradeoffs aside, does ARCA's vision actually amount to a rocket that can perform in the real world, nevermind reach a distant asteroid?

ARCA is betting big, promising that its EcoRocket Heavy will be "the heaviest and has the highest thrust compared to any other vehicle ever built," according to the company's website. "It also promises the lowest cost/kg ever recorded."

Of course, that all relies on the company managing to raise a planned $73 million by selling crypto investors on the idea of mining asteroids for resources.

ARCA is planning to kick off its token sale in August, which in the year 2022 should give anybody pause following an endless list of scams luring victims into first buying tokens, promising various benefits or returns, and then pulling the rug from underneath them.

Popescu insists that the math checks out, though. He says that launching an asteroid mining mission will cost "in the range of $100 million" in a "very high risk, but also high reward initiative," which is something that would scare away "classic investors."

That's why ARCA Space turned to crowdfunding, he said, since individual investors wouldn't be asked to contribute "big amounts of money."

To succeed, the company would have to generate immense interest, raise a ton of money, launch a massive rocket for pennies on the dollar, find a resource-rich asteroid, extract its precious resources, and safely bring back the spoils.

And that's not even mentioning the intricacies of international space law, which could undermine such pursuits before they even get off the ground.

"Good luck, I guess?" Berger offered in a recent Ars post about the venture — and, indeed, they'll certainly need it.

Read This Next
Dumpster Fire
SpaceX Tested Starship's Engines and Accidentally Caused a Large Fire
That's a Lot of Stops
Elon Musk Says It Could Take Eight Starship Launches to Fuel Up a Single Moon Trip
Starship Update
Elon Musk Says He Goes on Twitter to Check on Starship's Progress
One Man One Rocket
After Latest Explosion, Elon Musk Vows to Test Another Starship Within Days
Futurism
China is Launching Their Highly Classified Reusable Spaceplane in 2020
More on Off World
Martian Oases
Yesterday on futurism
Scientist Proposes Growing a Forest Inside a Bubble on Mars
Appetite for Dest...
Thursday on the byte
Black Hole In "Hyper-Feeding Frenzy" Chews Through Stars and Shoots Its Leftovers Towards Earth
Lunar RGB
Wednesday on the byte
NASA Shows Off Artemis "Party Mode," Powered by Amazon (TM) Alexa (TM)
READ MORE STORIES ABOUT / Off World
Keep up.
Subscribe to our daily newsletter to keep in touch with the subjects shaping our future.
+Social+Newsletter
TopicsAbout UsContact Us
Copyright ©, Camden Media Inc All Rights Reserved. See our User Agreement, Privacy Policy and Data Use Policy. The material on this site may not be reproduced, distributed, transmitted, cached or otherwise used, except with prior written permission of Futurism. Articles may contain affiliate links which enable us to share in the revenue of any purchases made.
Fonts by Typekit and Monotype.