Elon Musk isn't entirely sure how many Starships it will take. 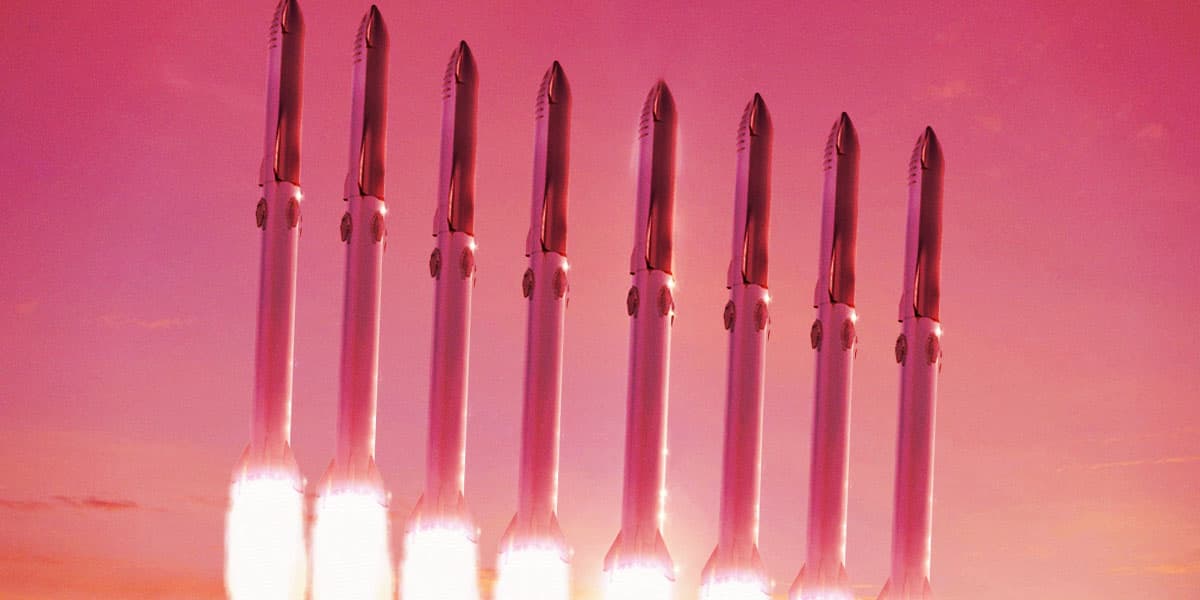 Delivering astronauts to the Moon is no easy feat, and it requires a disgusting amount of rocket fuel to pull it off.

With its fuel tanks filled to the brim, NASA's Saturn V rocket weighed in at 6.5 million pounds during the Apollo missions almost half a century ago. It managed to burn up 20 tons of rocket fuel — every second.

Fast forward several decades, and SpaceX CEO Elon Musk is trying to achieve similar greatness with his space company's Starship rocket. This time, it's gonna take a lot of refueling to get there.

SpaceX competitor Blue Origin recently griped that SpaceX might need as many as 16 launches to get to the Moon.

But "16 flights is extremely unlikely," Musk shot back in a Wednesday tweet. "Starship payload to orbit is [about] 150 tons , so max of 8 to fill 1200 ton tanks of lunar Starship."

And even if it did take 16 launches, Musk said, that wouldn't be a problem.

"However, even if it were 16 flights with docking, this is not a problem," he added in a follow-up tweet. "SpaceX did more than 16 orbital flights in first half of 2021 & has docked with Station (much harder than docking with our own ship) over 20 times."

Still, launch Starship and its mammoth Super Heavy rocket stage are a much, much bigger undertaking than SpaceX's workhorse Falcon 9 rocket — and even its significantly more powerful Falcon Heavy.

That raises another key question: whether Musk is implying that astronauts would have to wait half a year in orbit for their ride to the Moon to fully fuel up.

The complexities involved are staggering. For one, Falcon 9's first stage only incorporates nine Merlin engines. The Super Heavy booster alone will make use of 29 much larger Raptor engines.

The space company also has yet to complete its first orbital test launch involving the spacecraft and its booster.

But such a launch may not be too far off. SpaceX recently stacked a Starship prototype on top of a Super Heavy rocket stage for the first time in anticipation of the booster's maiden voyage.

If all goes well, Starship will go orbital before the end of the summer.

Only then, will SpaceX be able to tackle the next hurdle in its Moonshot journey: a refueling in space, involving two Starships.

Read This Next
Shot Well
Head of NASA Relieved to Hear Elon Musk Isn't REALLY Running SpaceX
Makeover Scene
Space Tourist Says He's Thinking About Flying SpaceX Craft Up to Fix Hubble
Grain of Salt
There's a Huge Problem With Elon Musk's Promise to Bring Starlink to Iran
Sluggo Mode
SpaceX Has a Major Problem With Its Starlink Internet Connections
Dumpster Fire
SpaceX Tested Starship's Engines and Accidentally Caused a Large Fire
More on Off World
Trashing Orbit
Yesterday on the byte
Elon Musk Says SpaceX May Build Starship That Dies on Purpose
Cat and Mouse
Yesterday on the byte
SpaceX to Launch "Hunter" Satellites for Targeting Rival Spacecraft
Space In Space
Yesterday on the byte
NASA Official Admits There's a Bit of an Issue on the Space Station
READ MORE STORIES ABOUT / Off World
Keep up.
Subscribe to our daily newsletter to keep in touch with the subjects shaping our future.
+Social+Newsletter
TopicsAbout UsContact Us
Copyright ©, Camden Media Inc All Rights Reserved. See our User Agreement, Privacy Policy and Data Use Policy. The material on this site may not be reproduced, distributed, transmitted, cached or otherwise used, except with prior written permission of Futurism. Articles may contain affiliate links which enable us to share in the revenue of any purchases made.
Fonts by Typekit and Monotype.