Yes, the flames even set an actual dumpster on fire. 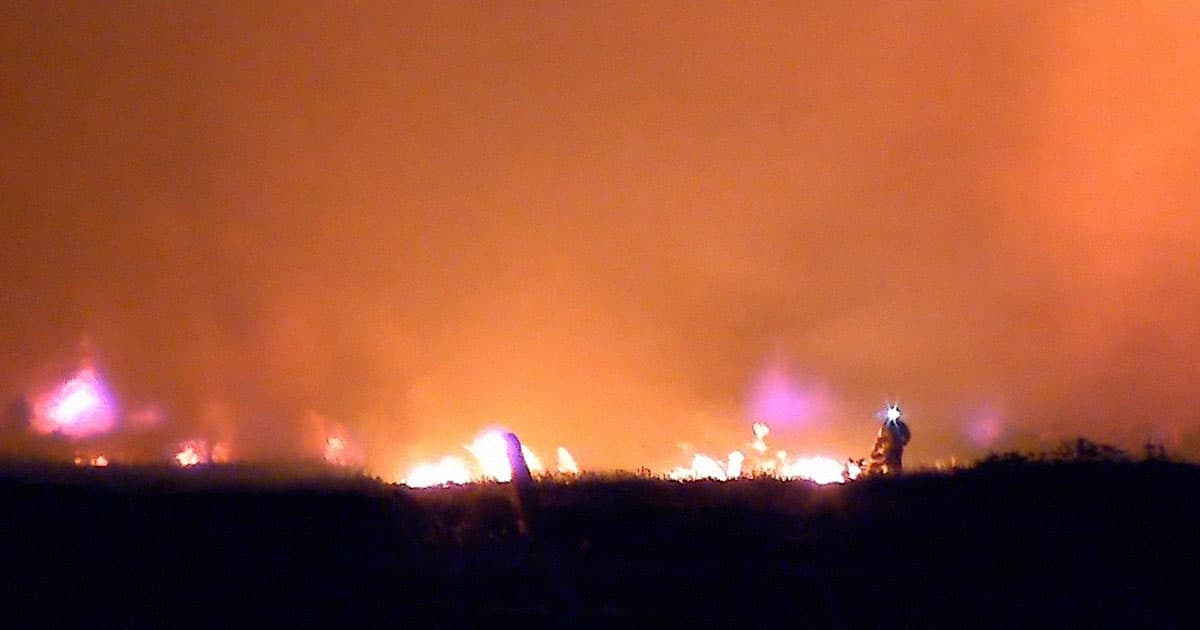 SpaceX is still hard at work trying to get its first orbital flight-ready Starship prototype ready for their big day.

While much bigger news stole the limelight from the company's testing — Queen Elizabeth II's death proved to be quite the distraction — SpaceX engineers at the company's testing facilities near Boca Chica, Texas pulled off a series of successful static fire tests of the experimental spacecraft on Thursday.

But not everything went going according to plan. During static fire engine tests, the massive flames spitting out of the bottom of the company's Ship 24 prototype lit a nearby patch of vegetation on fire, forcing the company to summon the local fire department.

Onlookers were also quick to point out that the conflagration caused a literal dumpster fire, which also formed following the massive ignition.

While it's certainly not the first — and won't be the last — fire caused by a massive rocket launch or test fire, the incident goes to show the immense forces involved, and the difficulties in keeping the situation under control.

And that's not to mention the fact that the offending Starship prototype fired only six Raptor 2 engines. Its Super Heavy booster will eventually fire 33 of them to get itself and Starship off the ground — an awe-inspiring display with a substantially larger potential for an even bigger fire.

SpaceX, for its part, has yet to install a water deluge or fire deflecting system at its testing facilities to stop future fires from burning out of control, Teslarati reports, instead relying on a single spray nozzle to cool things down.

Live streams of Thursday's testing show black smoke billowing from a green patch near the launch pad after Ship 24 ignited its six massive Raptor 2 engines, disappearing in a massive orange cloud of smoke in a matter of seconds.

It was both one of the longest and most powerful static fires of a Starship ever, according to Teslarati.

Firefighters then had the arduous task of extinguishing the growing brushfire, after waiting for hours while SpaceX unloaded the leftover propellant out of the spacecraft.

Responders even "intentionally lit a fire near the checkpoint," according to Baylor. "Seems like they are just going to burn the area between the pad and the village to speed things up."

While the fire is unfortunate, SpaceX did at least try to get ahead of the issue.

"All jokes aside, SpaceX has made efforts to prevent this from happening," Starbase aerial photographer Zack Golden tweeted, showing highlighted areas that "have been cleared of vegetation over the past two months, leading up to this test," in a birds-eye view of the site.

It's an issue that's not even unique to SpaceX's South Texas testing facilities. A Falcon 9 rocket, for instance — which is far smaller than a Starship prototype — lit a wildfire near historic launch pad 38A at NASA's Kennedy Space Center in Florida back in 2017.

In short, SpaceX — and eventually NASA — will have their work cut out to stop future launches from triggering potentially dangerous blazes.

More on Starship: Former NASA Official: Moon Launch This Month May Be "Embarrassing"

Read This Next
Shot Well
Head of NASA Relieved to Hear Elon Musk Isn't REALLY Running SpaceX
Makeover Scene
Space Tourist Says He's Thinking About Flying SpaceX Craft Up to Fix Hubble
Grain of Salt
There's a Huge Problem With Elon Musk's Promise to Bring Starlink to Iran
Sluggo Mode
SpaceX Has a Major Problem With Its Starlink Internet Connections
Classified
Here's What the Former Head of NASA Has to Say About the Moon Mission Delay
More on Off World
Light Me Up
6:09 PM on the byte
Wall of Lasers Cuts Across Hawaii's Night Sky
Water Sign
3:35 PM on the byte
Scientists Find New Evidence of Hidden Ocean World in Our Solar System
Trashing Orbit
Yesterday on the byte
Elon Musk Says SpaceX May Build Starship That Dies on Purpose
READ MORE STORIES ABOUT / Off World
Keep up.
Subscribe to our daily newsletter to keep in touch with the subjects shaping our future.
+Social+Newsletter
TopicsAbout UsContact Us
Copyright ©, Camden Media Inc All Rights Reserved. See our User Agreement, Privacy Policy and Data Use Policy. The material on this site may not be reproduced, distributed, transmitted, cached or otherwise used, except with prior written permission of Futurism. Articles may contain affiliate links which enable us to share in the revenue of any purchases made.
Fonts by Typekit and Monotype.