Amputee Gamer Gets A Bionic Arm With an Interactive Screen, Charger, and Drone

And the technology was inspired by Big Boss Metal Gear Solid. 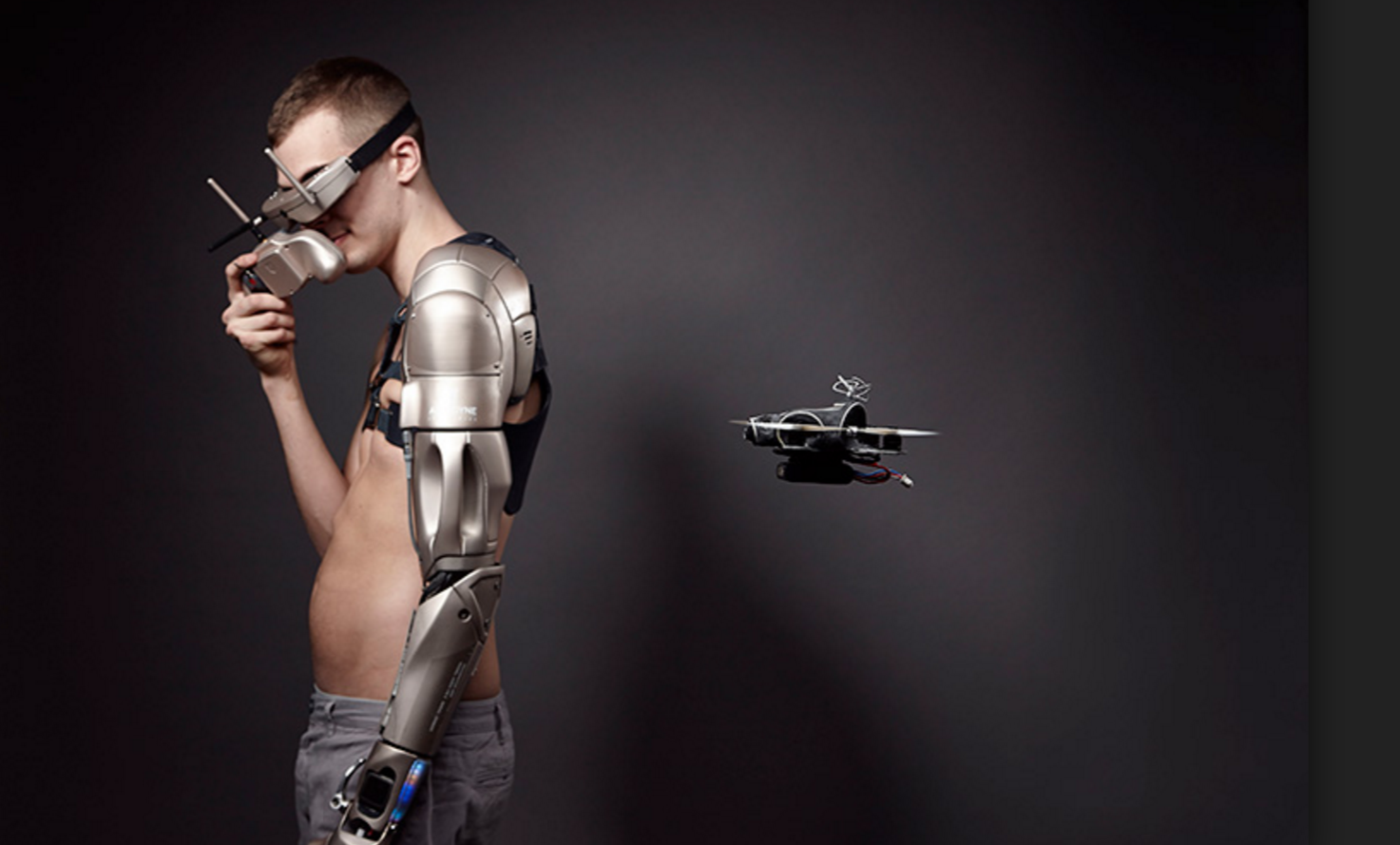 Perhaps our cyborg future isn't too far away. Groundbreaking technologies have already led a host a advanced devices that seamlessly blend the human and the synthetic. We have titanium spinal implants that allow us to regrow bone. We have artificial e-skin that can turn the human body into a walking display. There are even plans for cyborg lenses that get injected into our eyes.

And now, we have a functional bionic arm that comes complete with a wide array of  futuristic features (it even comes with a drone).

It was four years ago when James Young lost his arm and leg in accident in which he fell between two train carriages. For a time, he notes that he was in a very 'dark place,' having been almost entirely incapacitated by the accident. Of course, there were many things James lamented not being able to do.

One of the primary things? Gaming.

That said, despite his amputee, James managed to play his PlayStation 4 with his right arm, and surprisingly, his teeth. Clearly, he is a man who is dedicated to his games. As such, it is fitting that this gamer finds himself acquiring a one-of-a-kind prosthesis, thanks to an advertisement from Konami that was looking for an amputee gamer.

Ultimately, James was selected out of the 60 respondents to receive a sci-fi looking prosthetic inspired by Konami's Metal Gear Solid.

This project was led by prosthetic artist Sophie De Oliveria Brata, founder of the Alternative Limb Project. Open Bionics, another prosthetics company, was in charge of the manufacturing and the 3D printing of the arm's hands.

To top it off, James even got to give his two-cents in the design.

At £60,000, this carbon-fiber limb is controlled by muscle signals from James. He can shake hands, lift groceries, and even pick up coins. More excitingly, it features an interactive screen, a flashlight, a USB port for charging phones, and even a drone on the side—all battery powered.

However, with the arm weighing 4.7 kg (10 lb), and supported by a harness and some heavy gel, James asserts he is not capable of wearing the robo-arm all day. Nonetheless, this is a remarkable step towards the creation of prosthetics that allow humans to be far more than just humans.

While the companies involved are pushing for the bionic arm to be extended to other amputees, James has started his own fundraising campaign to improve the technology and, thereby, himself.

Read This Next
Accessible Gaming
Microsoft Patented an Xbox Controller With a Braille Display
Futurism
Electronic Skin Lets Amputees Feel Pain Through Their Prosthetics
Futurism
Georgia Tech's New Prosthetic Arm Enables Amputees to Control Each Individual Finger
Futurism
The U.S. Navy Is Developing Artificial Limbs That Are Intelligent
Futurism
This Sock Grants Sensation to Prosthetic Feet
More on Enhanced Humans
Skull Candy
Oct 24 on the byte
A Guy Lost His Eye and Put a Bright Light Into the Socket
So Sue Me
Sep 28 on futurism
Battle Erupts Over Alleged Grisly Photos of Brain-Hacked Neuralink Monkeys
Synchron Eyes
Aug 23 on the byte
Frustrated With Neuralink's Slow Progress, Elon Musk Approaches Competitor
READ MORE STORIES ABOUT / Enhanced Humans
Keep up.
Subscribe to our daily newsletter to keep in touch with the subjects shaping our future.
+Social+Newsletter
TopicsAbout UsContact Us
Copyright ©, Camden Media Inc All Rights Reserved. See our User Agreement, Privacy Policy and Data Use Policy. The material on this site may not be reproduced, distributed, transmitted, cached or otherwise used, except with prior written permission of Futurism. Articles may contain affiliate links which enable us to share in the revenue of any purchases made.
Fonts by Typekit and Monotype.