"I felt my hand, as if a hollow shell, got filled with life again.” 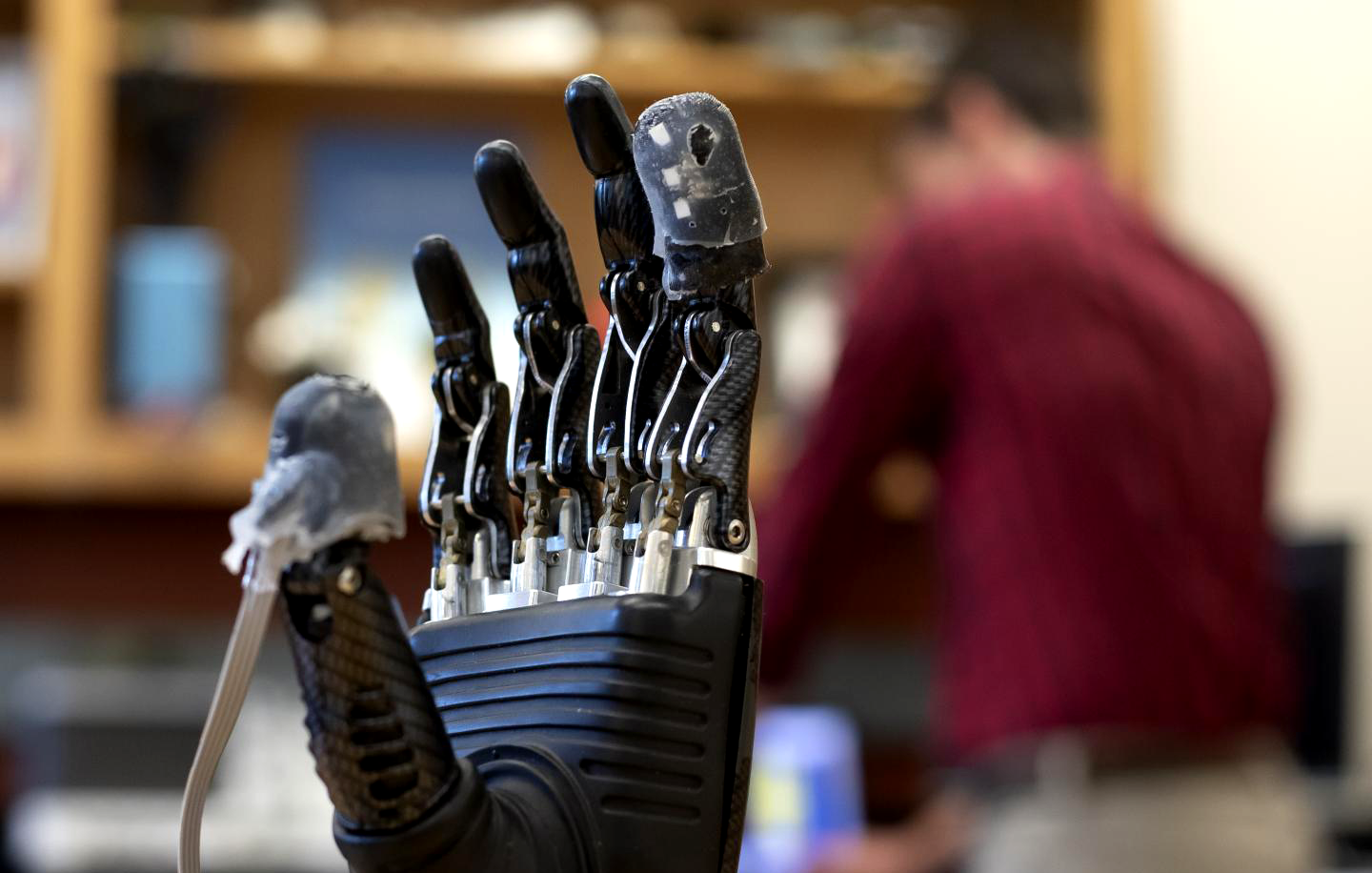 Up until the 20th century, wearing a prosthetic limb wasn't all that great. They were often unwieldy wooden contraptions with both form and function that fell far short of their natural counterparts. Today, though, we have prosthetics that we can control with our minds, that predict movement, and that fit perfectly thanks to 3D printing.

Still, even the most advanced prosthetics have room for improvement. They still don't give the wearer a ton of feedback about what they're touching — no temperatures, no textures. That's why researchers at Johns Hopkins University have created a new electronic dermis (e-dermis). When placed over a prosthetic device, this artificial skin lets an amputee feel pain and other sensations in their missing limb. The researchers published their study Wednesday in the journal Science Robotics.

To create an electronic skin that functions like human skin, the researchers started by looking — where else? — at human skin. They noted that our skin contains a network of receptors that relay a variety of sensations to the brain, letting us know if what we're touching is sharp or smooth, hot or cold, hard or soft, and so on.

They designed their device to transmit two specific sensations: the curvature of an object and its sharpness. They constructed their e-dermis out of a combination of fabric and rubber, adding in layers of sensors to imitate the receptors in human skin. These receptors could detect the sensations of an object — whether it's sharp, for example — and then send those sensations to the peripheral nerves in an amputee's residual limb via wires.

To figure out what kind of information the device should send its wearer, the researchers used a technique called transcutaneous electrical nerve stimulation (TENS) to stimulate the peripheral nerves in the amputee's residual limb and ask what they felt in their phantom limb.

For example, say a certain level of TENS at one location on the residual limb produced a sensation of pain in the amputee's phantom thumb. The researchers would know to deliver that level of electronic stimulation to that location when the prosthetic's thumb touched something comparably painful, such as a sharp object.

They detected brain activity using electroencephalography (EEG) to confirm that the process stimulated the phantom limb.

Essentially, the researchers taught their e-dermis to electronically encode different sensations just like human skin does. One way that could be beneficial? The e-dermis could make prosthetics feel more life-like while protecting them from damage.

“After many years I felt my hand, as if a hollow shell, got filled with life again,” one volunteer told Luke Osborn, co-author of the study, according to The Atlantic. “I can differentiate between pain and not-pain without thinking, instinctively knowing if my arm is in danger.”

Eventually, the e-dermis could even help us give robots the ability to "feel" sensations in a human-like way, the researchers note in a press release. For now, though, giving humans the ability to feel those sensations once again is probably exciting enough.

Read This Next
Futurism
Georgia Tech's New Prosthetic Arm Enables Amputees to Control Each Individual Finger
Futurism
The U.S. Navy Is Developing Artificial Limbs That Are Intelligent
Futurism
This Sock Grants Sensation to Prosthetic Feet
Futurism
Mind-Controlled Prosthetic Arm Is World's Most Advanced Bionic Arm
Futurism
Amputee Gamer Gets A Bionic Arm With an Interactive Screen, Charger, and Drone
More on Enhanced Humans
Brain-Computer Im...
Jan 3 on the byte
Neuralink Cofounder Says New Company's Eye Implant Could Be "Ultimate" VR Tech
Eyes Have It
12. 30. 22 on futurism
Meet the Neuralink Cofounder Who Left and Started a Competitor That's Now Rapidly Catching Up
Butcher Shop
12. 6. 22 on futurism
Neuralink Employees Admit Company Has Killed 1,500 Animals So Far
READ MORE STORIES ABOUT / Enhanced Humans
Keep up.
Subscribe to our daily newsletter to keep in touch with the subjects shaping our future.
+Social+Newsletter
TopicsAbout UsContact Us
Copyright ©, Camden Media Inc All Rights Reserved. See our User Agreement, Privacy Policy and Data Use Policy. The material on this site may not be reproduced, distributed, transmitted, cached or otherwise used, except with prior written permission of Futurism. Articles may contain affiliate links which enable us to share in the revenue of any purchases made.
Fonts by Typekit and Monotype.