Microsoft Patented an Xbox Controller With a Braille Display 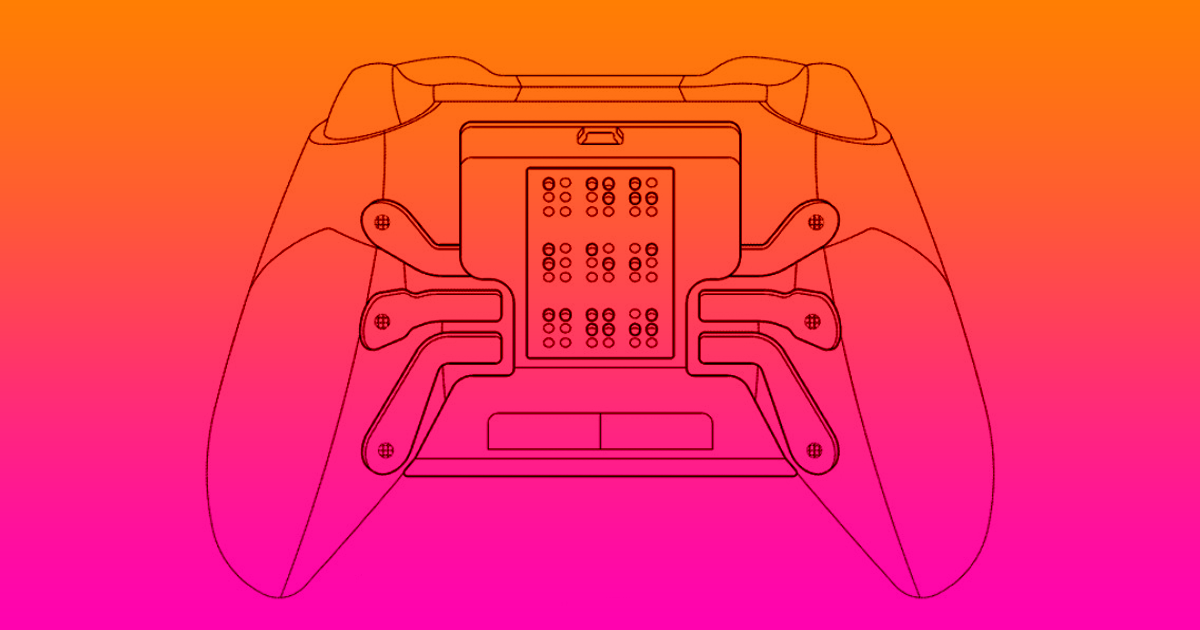 A new Microsoft patent shows how the company might make its Xbox console more accessible to visually-impaired people.

The patent describes a new accessory for Xbox controllers that functions like a Braille touchscreen — it'd give gamers a live feed of on-screen text and chat, according to LetsGoDigital.

For people with the degree of visual impairments called "low vision," 30 percent report that their vision "notably impacts" their ability to use a computer, according to a study conducted by an online accessibility organization called WebAIM.

Almost half of the people surveyed use screen readers, screen magnification tools, or increase the size of text on their computers. But with games, those options aren't available, so people who can see well enough to play the game but not well enough to read the on-screen text generally miss out.

The Braille display, which sits on the back of the controller where a person's fingers would already be resting, also lets the gamer type and participate in online chat, and translates voice commands, according to LetsGoDigital.

It's worth pointing out that the existence of a patent isn't the same as a real product — though GameInformer speculates that an announcement may be coming at June's E3 conference. The patent was awarded on Thursday but first filed back in October, so there's no telling whether Microsoft changed its plans since then.

But given the goodwill Microsoft racked up when it announced its Xbox Adaptive Controller, a simplified controller with two hand-sized buttons and an oversized D-pad for people with physical disabilities, it makes sense for the company to continue pursuing new ways to make gaming more accessible.

More on Xbox: Sailors Use Xbox Controllers to Operate Part of the Navy’s Newest Attack Sub

Read This Next
AR Combat
U.S. Soldiers to Wear Microsoft AR Goggles During Combat Missions
Futurism
Paralyzed Man Uses Exoskeleton to Run Race for Policy Change
Futurism
Amputee Gamer Gets A Bionic Arm With an Interactive Screen, Charger, and Drone
More on Enhanced Humans
Brain Transparency
Feb 3 on futurism
Duke Professor Welcomes the "Promising" Future of Employers Reading Your Brain
Brain-Computer Im...
Jan 3 on the byte
Neuralink Cofounder Says New Company's Eye Implant Could Be "Ultimate" VR Tech
Eyes Have It
12. 30. 22 on futurism
Meet the Neuralink Cofounder Who Left and Started a Competitor That's Now Rapidly Catching Up
READ MORE STORIES ABOUT / Enhanced Humans
Keep up.
Subscribe to our daily newsletter to keep in touch with the subjects shaping our future.
+Social+Newsletter
TopicsAbout UsContact Us
Copyright ©, Camden Media Inc All Rights Reserved. See our User Agreement, Privacy Policy and Data Use Policy. The material on this site may not be reproduced, distributed, transmitted, cached or otherwise used, except with prior written permission of Futurism. Articles may contain affiliate links which enable us to share in the revenue of any purchases made.
Fonts by Typekit and Monotype.